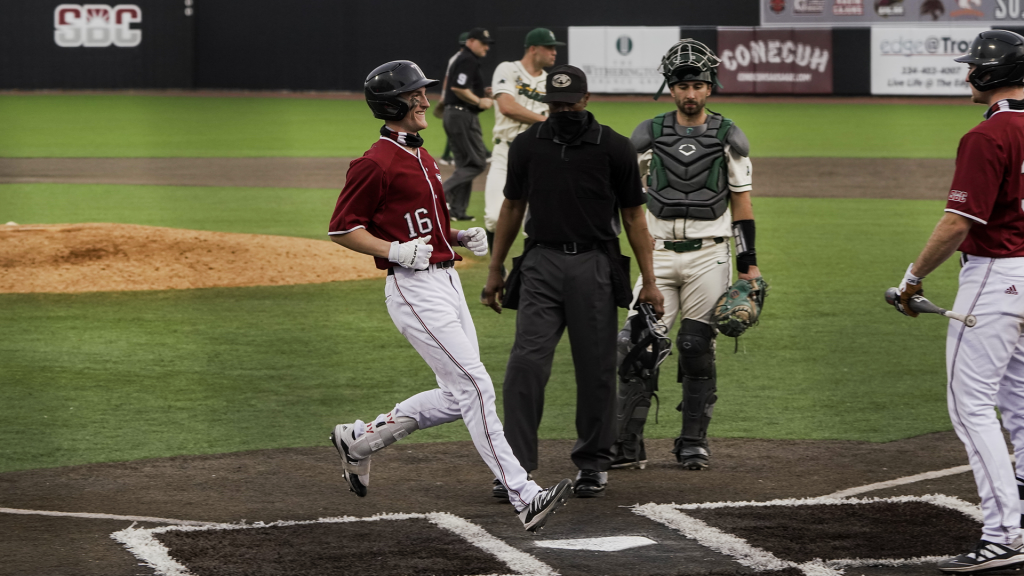 Troy snapped its six-game losing streak with an emphatic win over Tulane on a beautiful Saturday afternoon at Riddle-Pace Field. The bats finally came to life as the Trojans used an eight-run sixth inning to down the Green Wave, 12-3.

Six of Troy’s eight runs in the sixth inning came before the Green Wave recorded an out. Caleb Bartolero doubled and homered to highlight the frame, while Dalton Sinquefield also hit a double and Logan Cerny blasted his fifth home run of the year.

Five Trojans recorded a multi-hit game as Troy logged a season-best 17 hits.
Bartolero, who had four hits on the year entering the game, doubled his season hit total with a 4-for-4, three-RBI day at the plate. Sinquefield doubled twice in the game and tallied three RBIs while Rigsby Mosley went 3-for-4 with a double. Logan Cerny totaled four RBIs in the game, three of which came on his sixth-inning homer.

After Tulane (7-7) took a 3-0 lead after two innings, Garrett Gainous and Mason Kenney (1-1) went to work, closing the game with seven consecutive scoreless frames. Gainous struck out seven batters in his fourth start of the year while Kenney earned the win after not allowing a hit in 3.2 innings.

Troy (8-7) left a runner stranded in scoring position in both of the first two innings, but broke through with three runs in the third. Mosley led off with a double before Sinquefield brought him home with a double of his own. Sinquefield advanced to third on a wild pitch and was brought home on a Cerny chopper to shortstop.

After a Green Wave pitching change, Easton Kirk tied the game at 3-3 with a single up the middle to score Sullivan, who walked and advanced to second on a Nic Nolan single. The Trojans loaded the bases with two outs, but left them stranded after a groundout ended the inning.

Bartolero doubled to open the bottom of the sixth frame before Brady Sherrill and Mosley loaded the bases with a walk and single, respectively. Drew Frederic was hit by a pitch to give the Trojans a 4-3 lead, and then Sinquefield broke open the game with a two-RBI double down the right-field line.

Cerny cleared the bases after he won a competitive at-bat with a three-run homer. William Sullivan doubled to center field, setting up Bartolero for his two-run homer to close the inning.

Troy added an insurance run in the eighth with Bartolero’s fourth hit of the day, an RBI single up the middle to score Kirk.

Donovan Benoit was tagged with the loss for the Green Wave after allowing two earned runs on three hits in 2.1 innings. In total, Tulane used seven pitchers in the game.