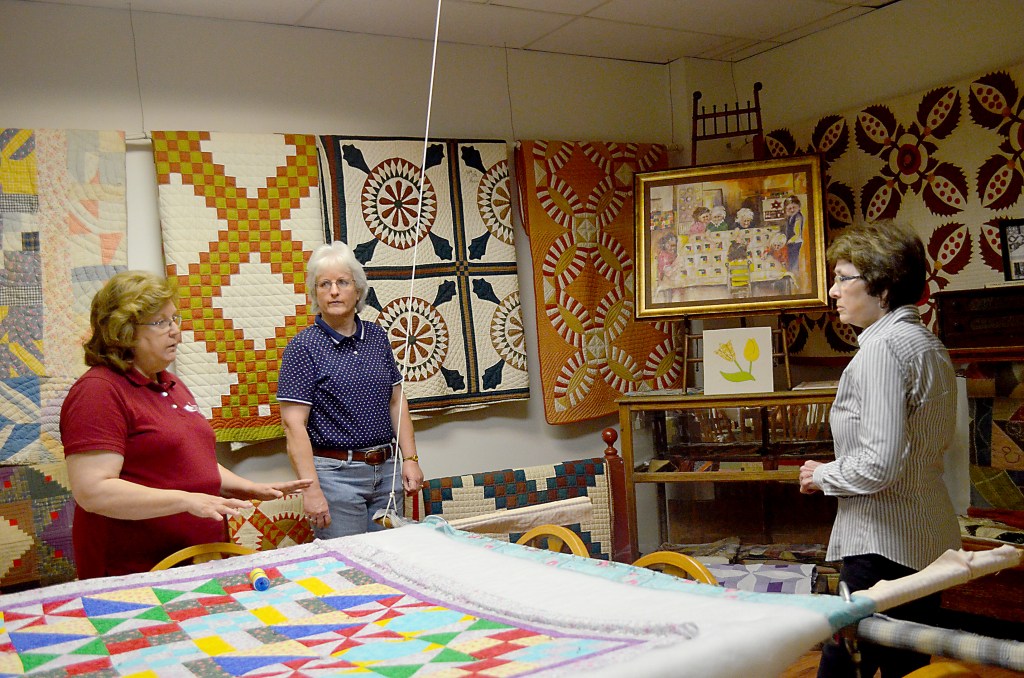 Imagine an early morning frost and a farm family standing by the roadside. Imagine a young woman with a quilt wrapped about her shoulders as she watched the Native Americans being driven westward by the soldiers. The year was around 1832.

That is one of the many stories that are told in patchwork fashion at the Pioneer Museum of Alabama’s Biennial Quilt Show that runs through April 3.

Barbara Tatom, museum director, said every quilt has a story, some told and, for others, the stories have been lost to time.

“This feather quilt was made around 1775 by the grandmother of Mrs. Sam Passmore,” Tatom said as she pointed to the quilt-covered bed. “It was made in South Carolina and brought to Monticello here in Pike County in the late 1820s.  The story is that Mrs. Passmore stood and watched as the Indians were drive westward.”

Tatom said the quilt was donated to the Pioneer Museum of Alabama by Lois Self Whatley and Emmie Self Henderson granddaughters of Mrs. Passmore.

“The Pioneer Museum of Alabama has a large collection of quilts thanks to those who have donated their family quilts,” Tatom said. “The many quilts in the museum’s inventory are a part of this year’s quilt show which totals more than 75 quilts that are displayed throughout the museum.”

“The Egyptian Sunburst quilt was made in the late 1850s to the early 1900s,” Tatom said. “It is a beautiful and colorful quilt with intricate piecework and decorative stitching on the field.”

Susan Mease of Westchester, Pennsylvania donated a quilt that belonged to her great-grandmother, Catherine Wilkes Chesser, who was born March 31, 1863 and died May 25, 1899.

She was the wife of James Lafayette Wilkes born in Petrey and she is buried in the Petrey Cemetery.

“The quilt is made in the style of the African Americans of the area,” Tatom said. “The quilt was displayed at the Florida Museum of History and documented as a Florida Heritage Quilt and given the number 45 QC 63.”

Quilts are a part of America’s heritage and were once used as bedcovers to keep people warm. They were also used over windows and around doors to keep out the cold and wind, Tatom said

Quilts were used as play pallets for the children while their parents worked in the fields. Young women would often make a quilt for their hope chests and older women would make coffin or burial quilts for their loves ones or to donate to the church for use at funeral services.

The coffin quilts were most often made of dark-colored scraps.

Tatom said the Pioneer Museum of Alabama has a large number of quilts made from dark cloth in its inventory. However, some of the quilts are made from what appears to be expensive material and ornate trimming, indicating that the quilts, perhaps, belonged to more affluent families.

The most popular quilt pattern of the early American days was the crazy quilt because the quilt squares were made from different materials, usually rescued material from clothing that had been worn almost to rags.

The log cabin pattern was also popular, along with the bear paws, wedding ring, star, flying geese and the bow tie.

Tatom said it is fun and interesting for visitors to the quilt show to identify the different pat-terns and the variations of those patterns.

Then there are quilts that just stand alone, so to speak, Tatom said, indication one quilt that was obviously well used and faded colorless.

“Someone had stitched pictures on the quilt of animals, campfires, wagon and pioneer women and children,” she said. “Every quilt has a story. I wish we knew all the stories behind the quilts in the show but, even though we don’t, we can enjoy the art of quilt-making as exhibited in the 2021 Pioneer Museum of Alabama Quilt Show. The many different styles, patterns and colors bring the museum to life. The quilts add a whole different dimension to the museum and enhance many of the other exhibits.