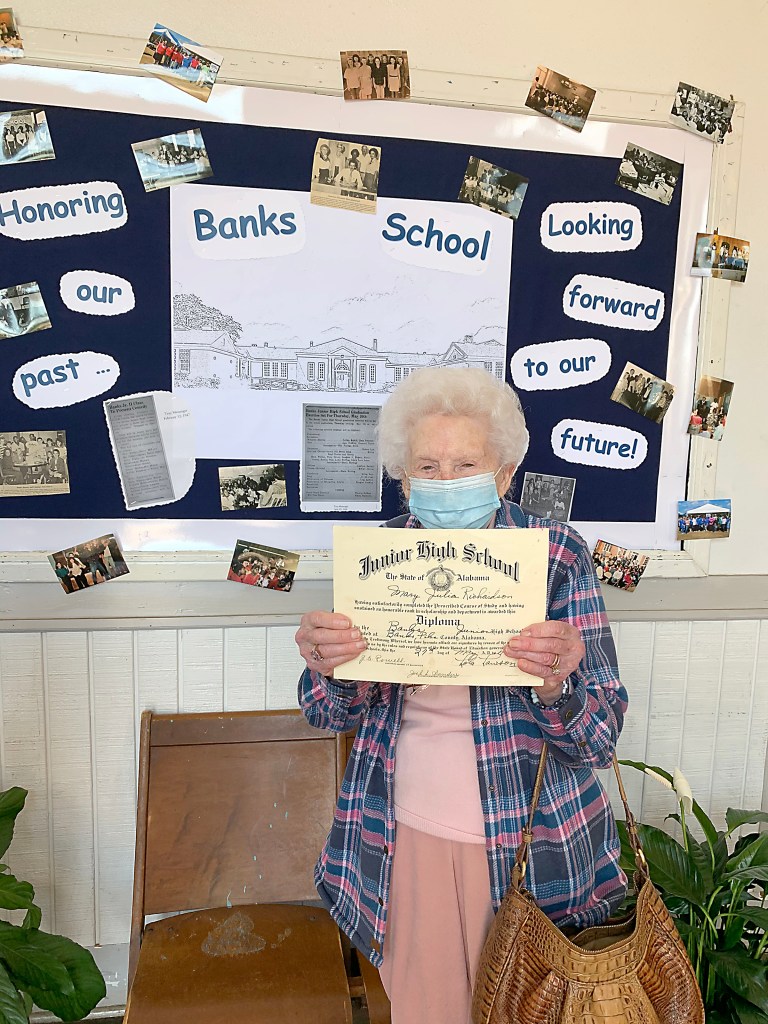 Maria Julia Richards holds up her 1943 diploma from Banks Junior High School. She was one of about 400 people who returned to the Banks school during the weekend to visit. The old school building will be torn down and replaced by a modern facility.

The walk-through at Banks School over the weekend was like a who’s who at the storied middle school that will be razed to make space for a new school designed to meet the educational needs and demands of the 21st century.

“There is a lot to be said about a small school,” Richardson said. “Banks School has always had good teachers, interested parents and good community support. That makes it a good learning environment for the students and provides the building blocks for success in whatever path a student takes in life.”

Richardson said sometimes a school can be so large that students can get lost in the shuffle and their full potential may not be realized.

“Banks School is a place where every child can be successful,” he said. “This aged school building has served me and countless others well and the new building will continue to meet the educational needs of this community in the many years to come.”

Shantell Rouse, principal, said everyone was appreciative of the opportunity to visit the school one last time.

“Some brought old class pictures in hopes of getting identifications of former classmates or just to share,” Rouse said. “Many took photos of their classrooms and the auditorium where they attended assemblies or participate in class programs or where they played basketball. Some just stood quietly and remembered.”

John Evers remembered the ninth-grade dance in the auditorium; Dorothy Young stood in the vacated place of the pot-bellied stove that heated her classroom and Dale Harden climbed the ladder to the attic, an antic that would have sent him to the cloak room as a student.

Mary Williams and her husband, Jerry, visited the classroom where she did her student teaching and Jackie Boswell took his wife, Cindy, on a tour that included his homeroom, cloakroom and the mention of the blackboard and erasers.

Sweetie Mae Siler’s son drove from Huntsville to drive her to Banks School where she was “the lunchroom lady” for so many happy years.

Don Renfroe not only went to Banks School, he “went under” his mother Mildred Renfroe who was a teacher and basketball and baseball coach.

“We saluted the flag every day and every child had a job to do, from dusting the erasers to toting in coal for the pot-bellied stove,” Renfroe said. “The teachers were in control and the principal carried a big stick. The teachers instilled in us work ethics that we carried over into life. And we got good training at home.”

Tammy Calhoun, an organizer of the walk-through, said stories shared, hugs given and tears shed were the hallmarks of the weekend walk- through.

“We knew there was a lot of interest in the Banks School and seeing it for the last time but we didn’t realize how much,” Calhoun said. “We had more than 400 signatures on the sign-up sheet and many more did not sign. We sold 150 T-shirts and have orders for more and 45 bricks also with orders for more. It was a wonderful weekend and the stories told were priceless and so will be the photos taken on the last walk-through of Banks School.”

Calhoun said her understanding is that, after the storied building is demolished, five mobile units will be brought in to house the student classrooms at the middle school. The primary school will remain at its present site until the new Banks School is completed.

“Until then, we are honoring our past and looking forward to our future,” Calhoun said.

But, before the old Banks School goes tumbling down, many photos will be taken and many good times remembered and stories told.

Don Renfroe said it will be sad to see the old school tumble.

“But, if the new school will provide better educational opportunities for our kids, then let her go!”