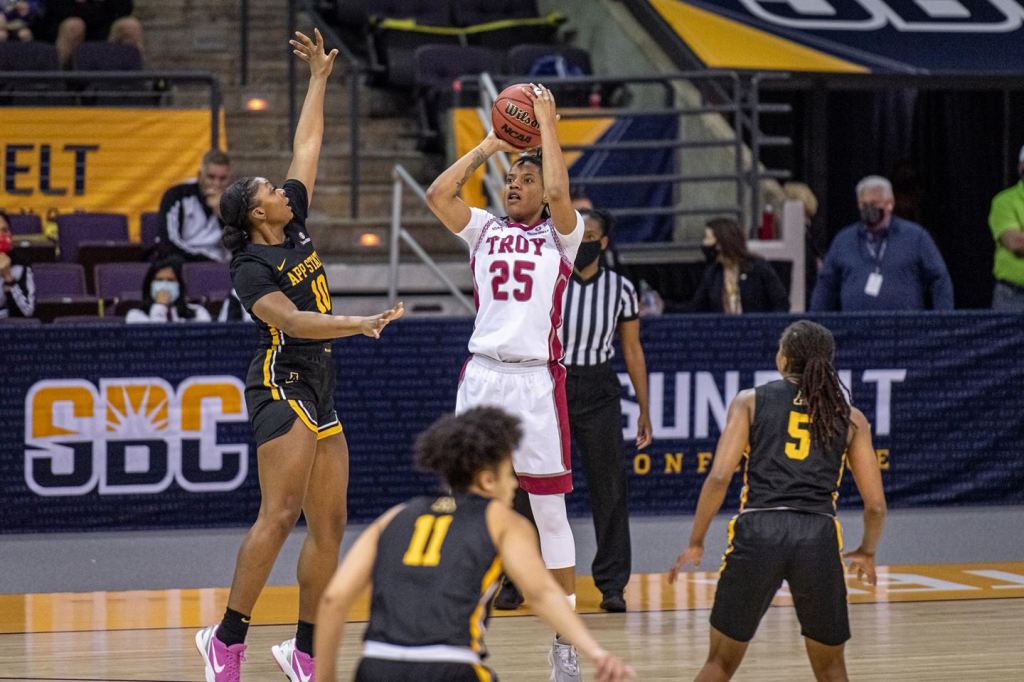 PENSACOLA, Fla. – For the third time since 2016, the Troy women’s basketball team will be playing for a Sun Belt Conference Tournament Championship after defeating Appalachian State 66-63 on Sunday in the Pensacola Bay Center Arena.

The Trojans found themselves in familiar territory with a lead early, but in a fight late. Within the first five minutes of the contest Troy (21-5) had a 13-0 lead and seemingly couldn’t miss from the field, connecting on their first four field goal attempts. The early advantage proved crucial for Troy as App State (15-12), led by Pre Stanley who scored 21 points in the first half, erased Troy’s 13-point lead and forced a 38 all score at halftime.

Similar to the start of the game, Troy looked to be in a groove coming out of the locker room before App State and Troy began to trade buckets. The big difference in the first and second halves was the Trojans defense against Pre Stanley, who Troy limited to just two total points in the third quarter. The game began to swing in the Trojans favor in the final minute of the third. After Tyasia Moore knocked down two big free throws, Felmas Koranga earned a big rebound and put back followed by a steal from Sharonica Hartsfield that led to a buzzer beating offensive rebound and score from Tiyah Johnson to give Troy a 10-point advantage going into the final frame.

After Troy scored 24 third quarter points, the Trojans couldn’t get anything going in the fourth. Troy scored four total points in the fourth with its first bucket coming with under six minutes to play while their final score came with just over four minutes left in the game. App State scored the final seven points, but Troy played solid defense late and was able to hold on for a three-point victory.