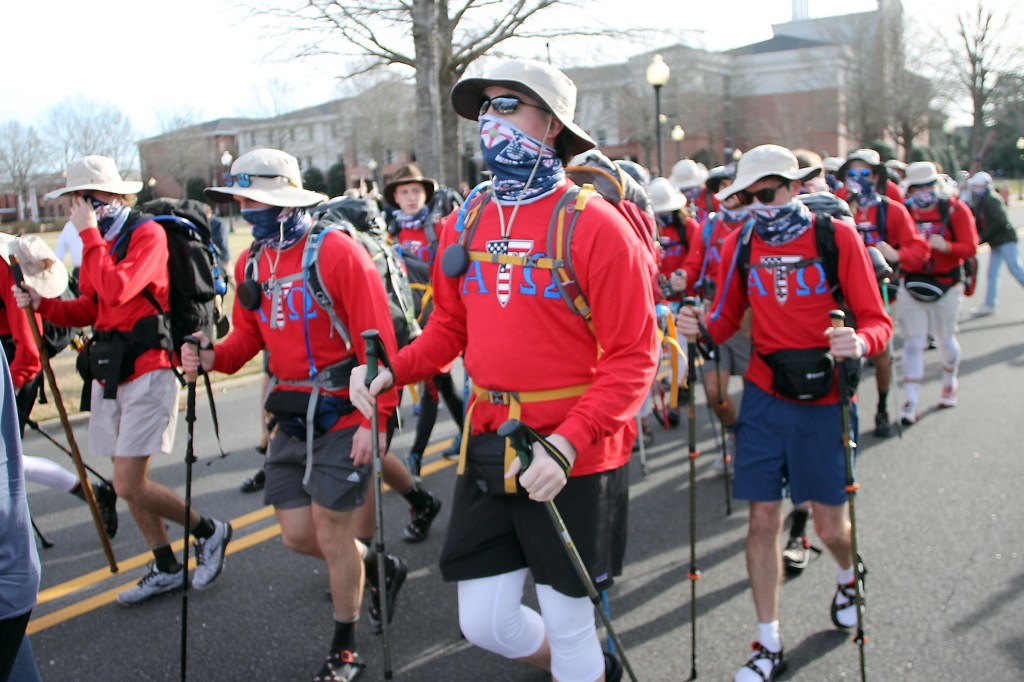 But, the fraternity members weren’t headed out on any ordinary trip to the beach for sun and fun. They strapped on backpacks and headed out on the 128.3-mile journey on foot. This year marked the 12th anniversary of the fraternity’s annual Walk Hard fundraiser for Jeep Sullivan’s Wounded Warrior Outdoor Adventures.

“This is the culmination of one year of work,” Josh Marvin, ATO’s Walk Hard director said. “This is a big moment for our chapter and our brotherhood. We have 36 members walking this year and a 14-man support team. It’s a team effort to get everyone to the beach.”

Before the team hit the trail for Florida, Troy University Chancellor Jack Hawkins spoke to the group.

“What you’re doing today is so much more important than just what you are doing,” Hawkins said. “This is the right side of Greek life. For the rest of your life you’ll remember this day. You’re doing something that will last a lifetime. It’s going to be tough. There will be time’s you’re in pain. But, don’t watch the man in front of you. Don’t watch his footsteps. Keep your eyes on the beach.”

Hawkins said the team’s departure on the 128-mile fundraising trail begins on March 5, the same day the first American war casualties were suffered in 1770. Hawkins said more than 1.5 million Americans have been killed in action since then and millions more have been wounded in combat.

Hawkins said ATO’s Walk Hard fundraiser helped wounded warriors who had given so much in the defense of freedom. “The university is proud of you,” Hawkins said.

The 36 hikers are scheduled to walk the 128 miles over a six-day period. The first leg of the trip was 28 miles, with an overnight stop in Enterprise. The fraternity will also have overnight stops in Hartford and Bonifay, Florida, as well as stops at Sonrise Church Camp and Pine Log State Park in Florida.

Jeep Sullivan was in Troy for the beginning of the annual fundraiser. Sullivan led the Fraternity members out of Troy on the trip south.

Sullivan said the fraternity fundraiser had helped hundreds of veterans over the years.

“Walk Hard is about 30 percent of our gross intake,” Sullivan said. “About 35 wounded warriors will get to do a whole lot of stuff because of this. It’s a big shot in the arm every year. It’s great to be here today to see some of America’s future leaders.”