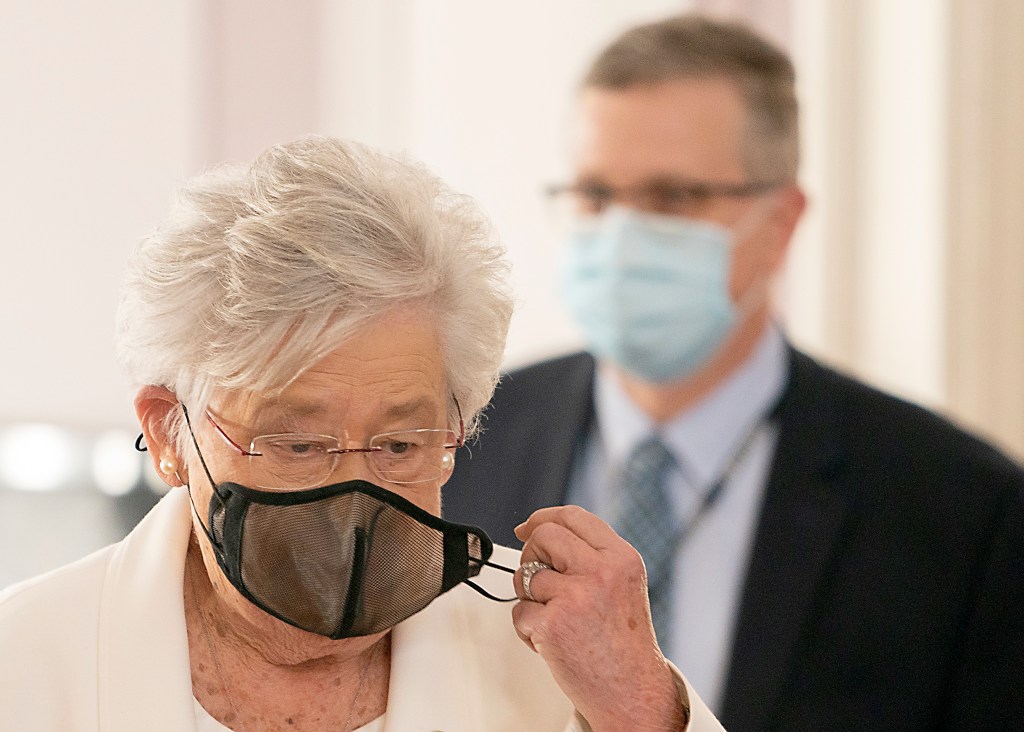 Governor Kay Ivey gave an update on the Coronavirus during a press conference Thursday March 4, 2021 in Montgomery, Ala. (Governor's Office/Hal Yeager)

Face masks will remain a mandatory part of Alabamians daily dress code for the next five weeks.

“Indications are, we are moving in the right direction,” Ivey said. “Even with the positive news, I believe we need to get past Easter before we remove the mask order. We’re not there yet, but we’re getting close. On April 9, the mask order will end. And, after April 9, I will not keep the mask order in place. But, I strongly urge people to exercise personal responsibility and not a government mandate.”

Ivey said after the state mask order expires, businesses and industries will be free to develop their own policies regarding masks.

Ivey also announced several areas where state mandates would be eased. She said Alabama’s senior centers would be free to resume activities so long as they took place in an outdoor setting. Congregating for indoor meals remains prohibited.

Ivey said summer camps could also resume if social distancing and all sanitation practices were followed. Hospitals and nursing homes may increase the number of visitors allowed at one time to two.

Restaurants, bars and breweries may remain open, but with no limit to the party size at tables. Partitions or six-feet of space between tables is still required.

Pike County Chamber of Commerce President Dana Sanders said the governor’s decision to ease some of the restrictions on restaurants was welcome news.

“Increasing the number of diners will generate more revenue for the owners,” Sanders said. “I like for them to be able to serve more people. Restaurants have been hit hard. I encourage people to support their local restaurants. The restaurant owners support the Chamber of Commerce, the community and even local baseball teams. They need our support in return.”

Alabama State Health Office Dr. Scott Harris said the public health threat COVID-19 poses to the general public remains high. He said the number of people that have died in the COVID-19 pandemic recently eclipsed 10,000 people. He said Alabama averages 52,000-53,000 deaths per year, but the pandemic has pushed that number to 64,000 for the past year.

Harris said more than 1 million people have been vaccinated as of Thursday. He said that number would increase over the next five weeks as more doses begin to arrive in the state each week. He said the number of doses will increase to about 150,000 per week.