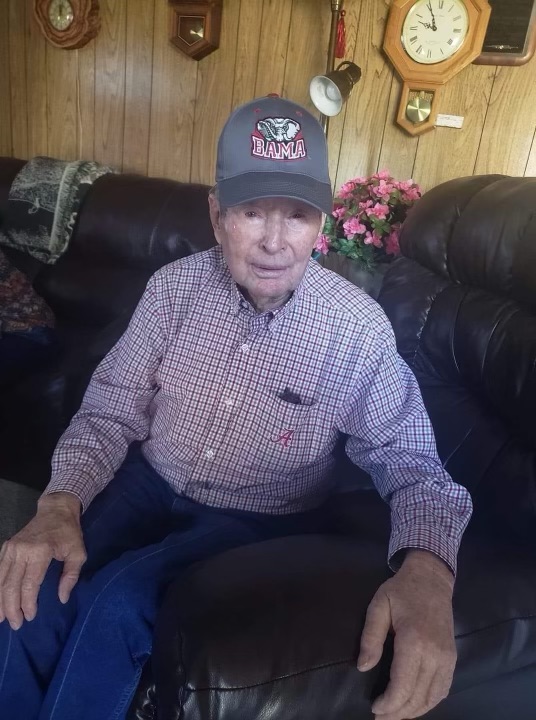 Gene Harrison, 91, of Troy, Alabama, passed away March 1, 2021, at Troy Regional Medical Center. Services will be Sunday, March 7, 2021, at 2 p.m. in the chapel of Green Hills Funeral Home with Reverends Leon Fortune and J.C. Turner officiating. Burial will follow at Loflin Baptist Church Cemetery in Josie with Green Hills Funeral Home directing. Serving as pallbearers will be Mike Celka, Cade Celka, Jesse Cofty, Mitchell Sanders, Jake Corell, and Mike Taylor. Visitation will be one hour prior to the service at the funeral home. State health guidelines will be implemented for all services, and masks are suggested for attendance.

Gene was born in Perote, AL, on November 21, 1929, to Leon and Ruby Lee (Mitchell) Harrison. He spent his early years farming in the Josie community, and moved to Troy in 1954 where he lived for the remainder of his life. He was employed by the Pike County Commissioners Court for over 30 years as a dragline operator building and maintaining roads and bridges. After retiring, he drove a propane delivery truck for eight years. Later, Gene managed cows and farming interests for Jerry Lott.

The family wishes to extend special thanks to Dr. Peter DiChiara and the staffs of Encompass Health Hospice and Troy Regional Medical Center for their attentive care. Friends and family can sign the guestbook online at www.greenhillsfuneralhome.net. The staff of Green Hills Funeral Home is honored to serve the Harrison family.