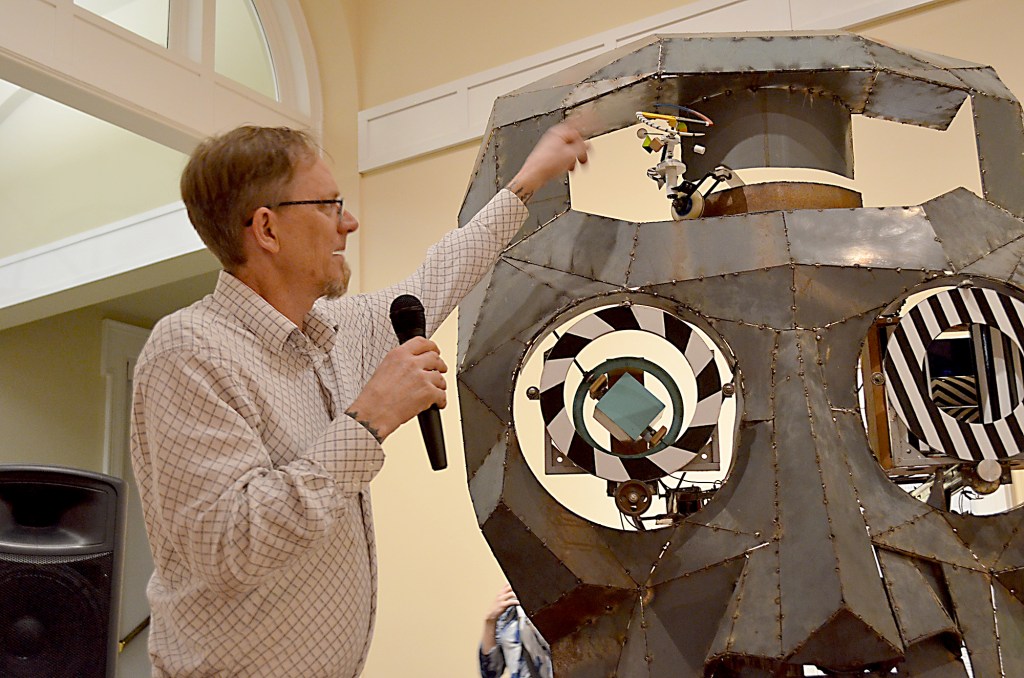 Jaine Treadwell | The Messenger Vincent Buwalda discusses how one of his mechanical pieces of sculpture developed.

You can never have too much fun.

But on Friday night, those who attended the artist’s reception for Vincent Buwalda at the Johnson Center for the Arts almost tipped the bushel basket of fun.

“Oh, my goodness,” Donnelly said. “What fabulous fabrication. I went to the artist’s reception not knowing what to expect. Vincent Buwalda is brilliant and so enthusiastic. The exhibition was delightfully interesting and fun, fun, fun.”

Donnelly was intrigued by Buwalda’s “Mask” and all of its many, intricate moving parts but she couldn’t walk away from “the scraping fork.”

“The fork scarping on rock is not an irritating sound,” she said. “It’s soothing. I had to have that moving parts sculpture.”

And, it took a good bit of encouraging to talk Buwalda into letting go of one of his early pieces.

Donnelly, laughing, said she could not have left the JCA without that fork.

“I was intrigued by those robot figures that talk to each other,” she said. “I asked Vincent what they were saying back and forth and he said, ‘disinformation’ and I laughed so hard.”

The artist’s reception was well attended by community members and out-of-towners as well.

“The exhibit was in three galleys so there was enough space to move around and view the motorized moving parts in each sculpture,” Donnelly said. “Going in, I didn’t know what I was going to see but I am so proud that I went. I don’t know when I’ve had so much fun.”

Brenda Campbell, JCA director, agreed that “Buwalda’s “My Life in Motion,” exhibit is nothing short of a fun house.

Buwalda’s “My Life in Motion” exhibition has the appearance of a Ripley’s Believe It or Not odditorium, the noisiness of a carnival fun house and the workplace of a Miguel Street mechanical genius.

“The artist’s reception brought to light for me how much laughter there was in those exhibition rooms,” Campbell said. “It was so good to hear laughter. At this time in our lives, we need and appreciate fun and laughter. On Friday night, the Johnson Center for the Arts was a fun house.”

Campbell said fun was had by all who came, from the oldest to the youngest.

“I watched Jennifer Senn as she enjoyed the all the fun, obnoxious exhibits,” Campbell said. “It is encouraging to have young adults in attendance.”

“I love all the moving parts,” she said. “The sounds reminded me of a clock shop. The exhibit will be a great outing for all ages.”

Buwalda’s exhibit will close on April 10. JCA hours are 10 a.m. until 5 p.m. Wednesday through Friday and until 3 p.m. on Saturday. Admission is free.

“You’ll never have so much fun even if you paid,” Campbell said.