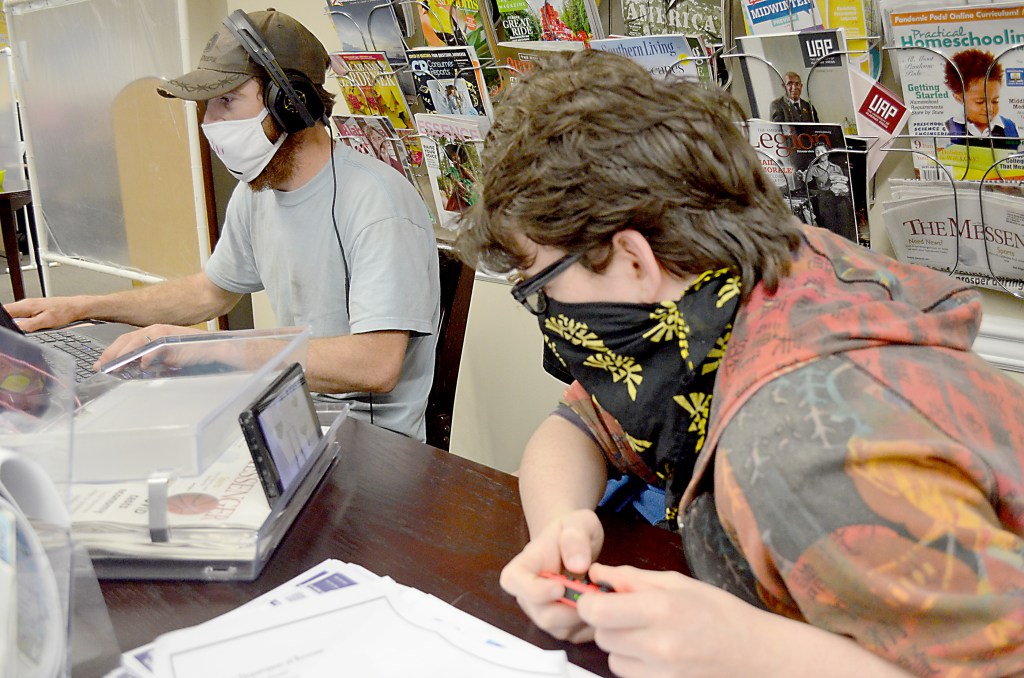 Photos by Jaine Treadwell Billy Augerot, left, and Noah Nicholson participate in events at Imagi-Con at the Tupper Lightfoot Memorial Library in Brundidge.

Imagi-Con Virtual is in the book, but the book is not closed. There is more to be written, said Karis Nicholson, project coordinator for the Tupper Lightfoot Memorial Library’s first comic/gaming convention.

“Amanda Trawick, co-coordinator, and Amber Brantley, library administrative assistant, and I have talked briefly, and we believe Imagi-Con Virtual was the beginning of bigger things to come. We started small but many events start small and steadily grow and bigger and better.”

COVID-19 dictated that the convention be virtual so plans for the first-ever event in Brundidge had to be revised and reworked.

“A lot of people worked together to make Imagi-Con Virtual a success,” Nicholson said. “We were pleased with the turnout. Even though it started slow, the crowd steadily grew.”

Even the smaller crowds were enthusiastic and everyone had a good time.

“The public feedback that we have gotten so far has been very good,” Nicholson said. “The live speakers were very popular as were the guest panelists throughout the day. Role playing is always fun and, at times, all three of the DND slots were filled.”

Nicholson said congratulations were due the costume contest winners: Twelve and under, Rylee Brooks, Brundidge, as Tsuyu Asui from My Hero Academia; 19 and over, Scott Richardson, Opelika, as Steampunk/Western/Post-Apocalyptic, Gender-Reversed, Dorian, from The Wizard of Oz.

The Imagi-Con web pages will remain this week for those who would like to watch videos and to see what was included in the events held on Saturday.

“We have heard the requests and plans are for the stand-ins to remain in the Knox Ryals Pavilion throughout the week,” Nicholson said.

“Imagi-Con was an idea from young adults who encouraged the library to have an event for them.  Before Covid, Imagi-Con was to be held in downtown Brundidge.  Because of the pandemic, the event became mostly virtual,” Trawick said. “Through oral and written comments, the library has gotten a great deal of encouragement to hold the event again, and this time have the second Imagi-Con in downtown Brundidge, where participants can meet and interact with each other.”