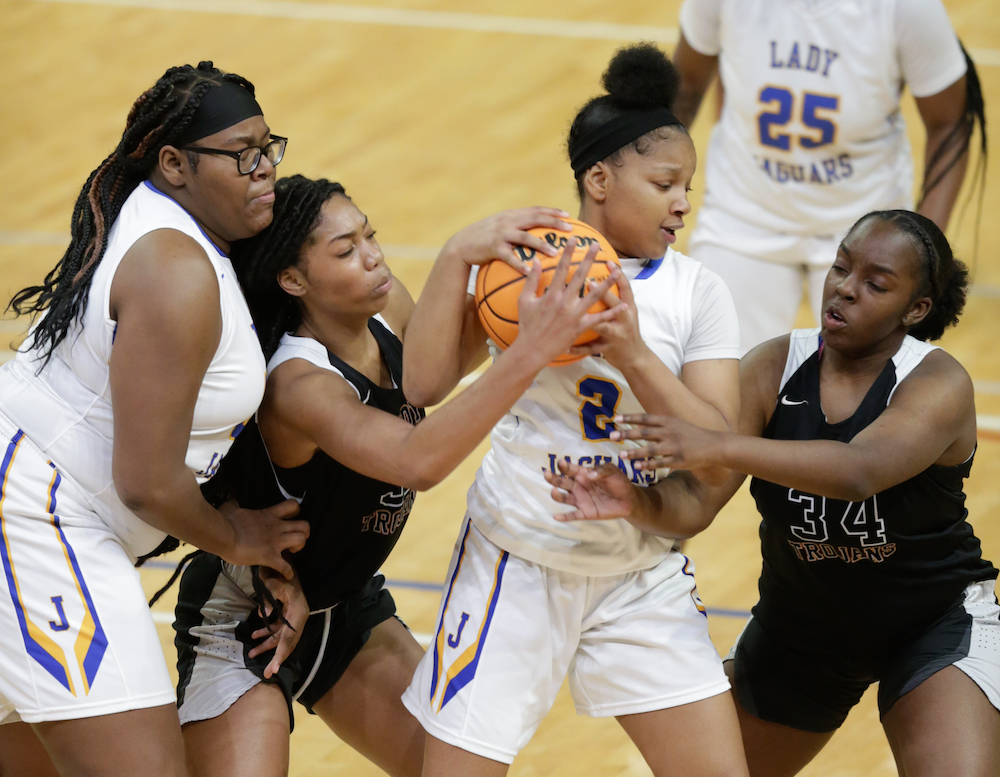 photo/Dan SmithLady Trojans Deanna Gosha, 32, and Mileah Ward, 34, battle for the ball against D’erricka Thompson of Jemison Saturday in Birmingham

BIRMINGHAM, AL – The Lady Trojans of Charles Henderson High fell into a 17-0 first-quarter hole against the Lady Jaguars of Mae Jemison of Huntsville and could never recover in a 76-37 loss in the semi-finals of the Class 5A Final Four state tournament at the Bill Harris Arena Saturday morning in Birmingham.

“I’m just proud of them, regardless of the score because it looks bad, but I am proud of them and hopefully we will be back next year,” said CHHS Lady Trojan head coach Dyneshia Elder. “I think it was just mentally our girls. They made mistakes on their own that could have been prevented, so it was not anything else. You cannot dribble through three girls that are trying to stop you and trap you, you’ve got to pass the ball back. We knew the game plan, we just didn’t execute it. It was not too much. We knew what they were doing, It was just us. Even from shooting. We made 2 for 25 three pointers. We normally make way more than that, and they made a lot more than we did, so sometimes stuff like that happens.”

Ending the year at 18-3, CHHS got behind quickly as Jemison – in just their fifth year as a new high school in Huntsville – came out with a hot hand.

A jumper by Saniah Parker put the Lady Jaguars up 17-0 with 3:53 left in the first quarter, before Makayla Hobdy of CHHS hit a free throw to put the Lady Trojans on the board at 17-1.

The rest of the first half was not much better, and it was 42-9 at halftime.

“If you hit your first two three-pointers, any team will get excited and hyped, and of course then our confidence level will fall down,” said Elder. “That’s just how it is with basketball. During halftime, I told our girls, just give me your all. Right now, as I can see, we outscored them in the second half. We know what we are capable of doing, we just did not execute that in the first half. They fought hard at the end and never gave up like I wanted them to do.”

CHHS actually outscored Jemison 28-24 in the second half, but the first half deficit was too much to overcome.

The Lady Trojans cut the lead to 53-26 at the end of the third quarter, but the Lady Jags came on strong in the fourth period en route to the 76-37 final.

CHHS returned two starters from the state championship team of last season in Hobdy and Kristin Jackson, and will return all starters next season. This Lady Trojans ended the year with a roster that includes two freshmen, three sophomores three juniors, and no seniors.

Coach Elder said it gives her girls motivation when they are counted out.

“It’s always motivation,” said Coach Elder. “Every year when we lose players – last year we lost Samira (Moore) , Tootie (Niaria Jones), and Mykyia (Milton) – all of them are playing college basketball right now. Then this year we only have two girls that played in the state championship game last year. So we really had three girls that did not have the experience to a certain extent, so I am proud of them. When people under-estimate us because every year we lose somebody, that gives our girls more motivation, and me also.”

Improving to 22-8 on the year, Jemison will advance tot he Class 5A championship game to be played Thursday, March 4 against the winner of Carver vs. Marbury.