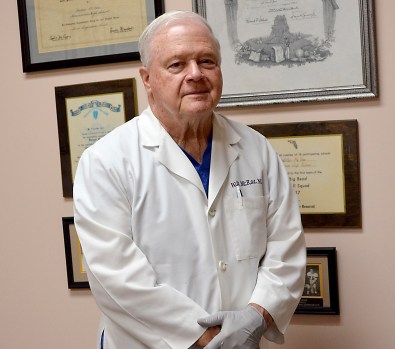 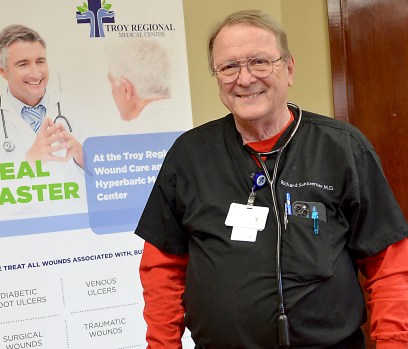 Troy doctors, Richard Schloemer and Wilton McRae, have joined a rather elite group. They have recently become octogenarians but their ‘shingles’ are not coming down.

Schloemer serves as medical director of the Troy Regional Medical Center Wound Care Center as also as an emergency department physician. McRae is a TRMC otolaryngologist or ENT physician and treats patients with diseases and disorders of the ear, nose and throat.

Both doctors recently celebrated their 80th birthdays in much the same way as they have celebrated every other milestone birthday, “with gusto!” Both have tried the “R” word but, before they could say “retirement,” they had nailed their shingles back to the door.

“Retirement means retreat,” Schloemer said. “I’m not going to retreat and let my brain sit idle. If you don’t use it; you lose it.”

Schloemer is a Michigan native and graduate of the University of Michigan Medical School. His surgical residency includes three years at Boston Naval Hospital. He is board certified in both general surgery and cosmetic surgery. He came to Troy in 1990.

McRae grew up in Marianna, Florida, graduated from the University of Florida and was in private practice in Dothan from1978 until 2000.

Both doctors quickly put down deep roots in Troy. Roots that are so intermingled in the extended community and in the medical family that they can’t be unearthed.

The doctors’ commitment to others is strong and their zest for life is so vigorous that the word retirement is not in their vocabulary. They work hard and, at age 80, they, laughingly, said they relax “pleasurefully.”

Both doctors came from families that pointed them in the direction of success.

“My dad challenged me,” Schloemer said. “He was interested in butterflies, fish and zoology. He often took me to the lake where I learned about biology. He always presented options to me that could lead to success.”

McRae came out of high school in Northwest Florida as the school’s best passer and best defensive back. He was accepted to and graduated West Point, served Uncle Sam as a Ranger and as a paratrooper.

“After many parachute drops from the 250-foot tower at Fort Benning, Georgia, I made my first jump from an Army plane,” McRae said. “When I was assured my parachute had opened, it was a quiet ride down until I hit the ground like I had fallen from a one-story building.”

McRae was proud to have served his country and of the many lessons learned.

“The most important lesson I learned was that I didn’t want a career in the Army,” he said, laughing.

Both doctors were called to their professions out of their desires to be of service to others. As octogenarians, they are dedicated to continuing to practice their trades.  But, they live by the old cliché, “All work and no play makes Jack a dull boy.”

And, there is nothing dull about these doctors, not even at age 80.

Schloemer recently purchased a new piano, a “grand” piano with an electronic gizmo that plays behind him like an orchestra. He is taking piano lessons so “move over Ray Charles.” He also plays the guitar, banjo and mandolin, “all self-taught.”  His party barn has earned the reputation as the place to be for karaoke, “move over Pete Seeger,” and for dancing from the jitterbug to line dancing. He makes and bottles wines of different kinds, paints still life pieces and landscapes. He’s a photographer with great black and white shots. He is a potter and his work includes raku. Schloemer is especially proud of the first-place award he won at the Peanut Festival for his “Mr. Peanut.”

Schloemer does what he calls “keeping his game up” and that includes memory exercises or brainwork every day.

“Because, I’m not going to retreat,” he said, with a smile. “My party barn needs to be enlarged.”

For McRae, Troy has been the next best thing to retirement. It has provided him with a place to practice medicine and a warm and friendly place to be.

“In Dothan, you could fall off the face of the Earth and nobody would notice,” McRae said, with a smile. “We love the small-town atmosphere here and this is a wonderful town to call home.”

And an even greater place to come home to after an “on the road again,” adventure

“We love to travel, my wife and I,” McRae said. “We’ve been from upstate New York to California, to Texas and New Mexico, the New England states and Nova Scotia with more places to go.”

The doctor is a dedicated home gardener with three acres and a creek and he is often seen with clippers at First Methodist Church.

He’s interested in history, including local history and has framed photos in his office that remind him there’s more to know.

Both doctors have a lot of interests and always have something to do or something they plan to do.

At age 80, both Dr. Richard Schloemer and Dr. Wilton McRae are not dull Jacks. They are “still” practicing physicians who have a zest for life and have no intentions of retiring and retreating.