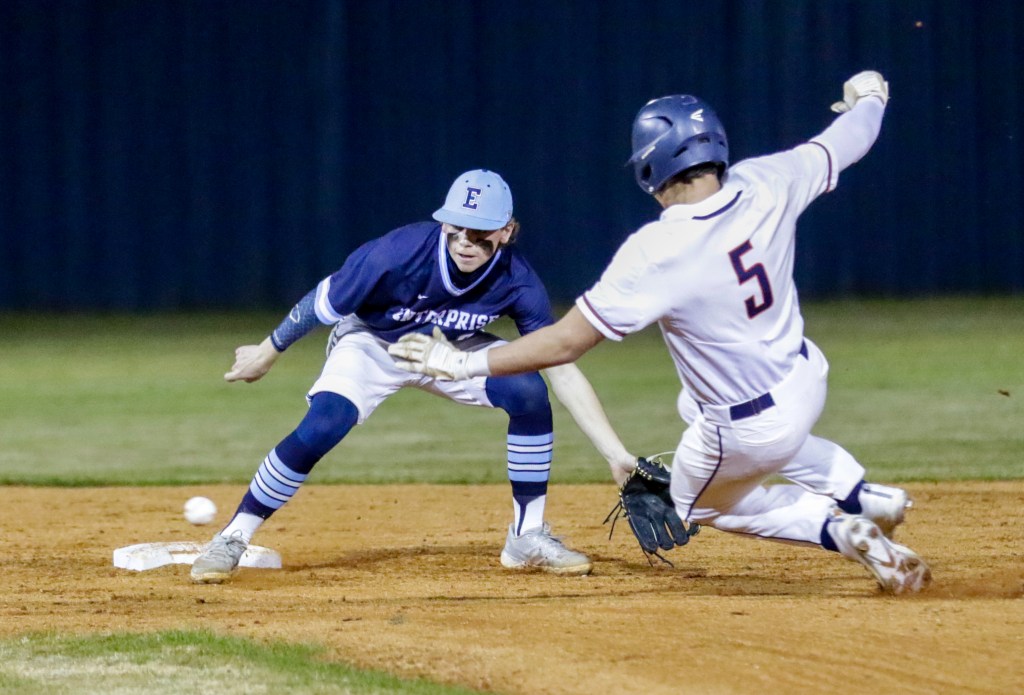 photo/Dan Smith Will Templin of CHHS, 5, was safe at second on this play Thursday night in a battle against Enterprise, as Wildcat shortstop Parker Sessions awaits the throw.

The Enterprise Wildcats scored twice in the top of the fifth inning to take a 3-2 lead over Charles Henderson High and held on to that advantage for the victory between the two rivals Thursday night at Hogan’s Hole in Troy.

CHHS took an early 1-0 lead in the bottom of the first inning in the home opener of the season for the Trojans, as J.B. Sanders led off with a double, stole third and scored when Bailey Sparrow grounded out.

The Wildcats tied the game at 1-1 in the top of the third inning when Parker Sessions – the senior shortstop that grew up playing baseball with many of the Trojans in Troy before moving to Enterprise – reached on an infield miscue, and later scored on a double by Noah Loy.

Cobie Cantlow of CHHS singled to lead off the bottom of the fourth inning, Will Templin and Ben Reeves walked, and Cantlow scored on a fielder’s choice by Cam Foley to give the Trojans a 2-1 lead.

CHHS starting pitcher Darryl Lee struck out seven Wildcats through four innings, but Enterprise touched the lefty for two runs in the top of the fifth inning to go ahead 3-2.

Trey Cavanaugh doubled to start the rally, and with one out Loy singled to drive in Cavanaugh. Loy scored later on a wild pitch for the 3-2 advantage.

CHHS loaded the bases in the bottom of the seventh inning, but could not get a run across, securing the 3-2 win for Enterprise.

Brady Huner worked the top of the seventh inning on the mound, allowing no runs on one hit while striking out three.

CHHS was led at the plate by Sanders and Cantlow with two hits apiece, while Sparrow and Templin had one hit each.

Loy and Jack Williams had two hits each for Enterprise, while Will Powell, Owen Burrow and Cavanaugh had one hit each.

The Trojans return home again on Monday for a double-header against Arnold High School of Panama City, Fla.