Artist says his exhibit is loud, noisy and obnoxious 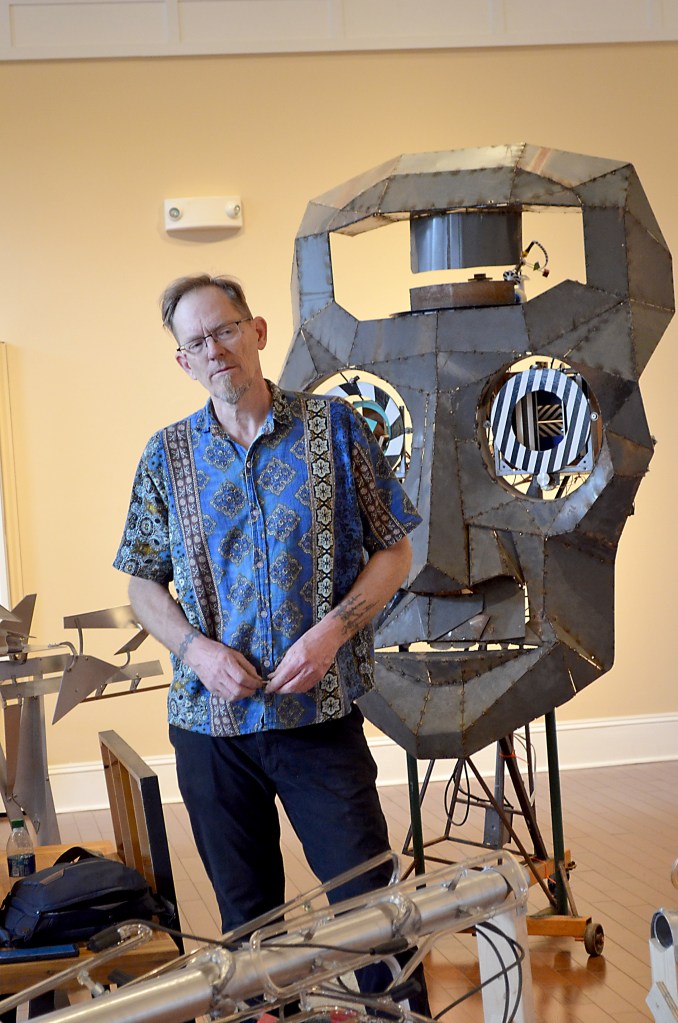 Jaine Treadwell | The Messenger The Johnson Center for the Arts will host an artist’s reception for Vincent Buwalda from 6 until 7:30 p.m. Friday. The public is invited to what will be a “madhouse.’ Buwalda’s “My Life in Motion” exhibition is loud, noisy, irritating and “just down-right obnoxious,” in the words of the artist. Brenda Campbell, JCA director, said “My Life in Motion” is like no other exhibition and is amazingly fun.

Artist Vincent Buwalda, laughingly, said he sometimes goes out of his way to be obnoxious.

And, those who venture into his “My Life in Motion” exhibition at the Johnson Center for the Arts will, perhaps, understand his “obnoxiousness.”

Buwalda’s exhibit is not unlike the Mad Scientist’s Laboratory.

Buwalda’s “My Life in Motion” exhibition has the appearance of a Ripley’s Believe It or Not odditorium, the noisiness of a carnival fun house and the workplace of a Miguel Street mechanical genius.

The Montgomery artist/machinist, was busy Monday setting up his “My Life in Motion” exhibition that will get off to a banging, clanging, tapping, zinging, ringing start with an artist’s reception from 6 until 7:30 p.m. Friday at the JCA. Everyone is invited and it will be a “mad-house,” the artist said.

Setting up the “working” exhibit was no easy task and required the day-long efforts of Buwalda, his brother, who came from Tennessee to assist, and a friend who also is not opposed to shifting, lifting, pushing, pulling and “fooling with,” electrical current.

“Just bang it with the hammer,” Buwalda instructed his two-man crew before stepping back to view the exhibit.

“I get these crazy ideas out of my head into silly reality,” Buwalda said. “My work usually be-gins with a question, “How would I portray the emotion of anxiety or fear or anger?  That sets me on the important journey of seeing my work evolve.”

Buwalda is a machinist at heart. His dad was an electrical engineer, so he was always building things. In time, Buwalda found a way for his mechanical side and his artistic bent to join forces in a “dark, whimsical way” that was all about having fun.

“I titled this exhibition, ‘My Life in Motion’ for two reasons. First, it refers to the entirety of the work in the exhibit. This work has taken all my life thus far to create and collect,” Buwalda said. “Then, it alludes to the more obvious, the actual motorized movement in my work. Movement, to me, is the additional color in painting or an auxiliary note in music. Supplement-ing the third dimension with fourth dimensional value, movement through time and space, this dynamic compels and drives me.”

The three stick-like mechanical figures were “talking” among themselves.

Friday night’s reception is a “no miss” event at the Johnson Center. It will be a madhouse!