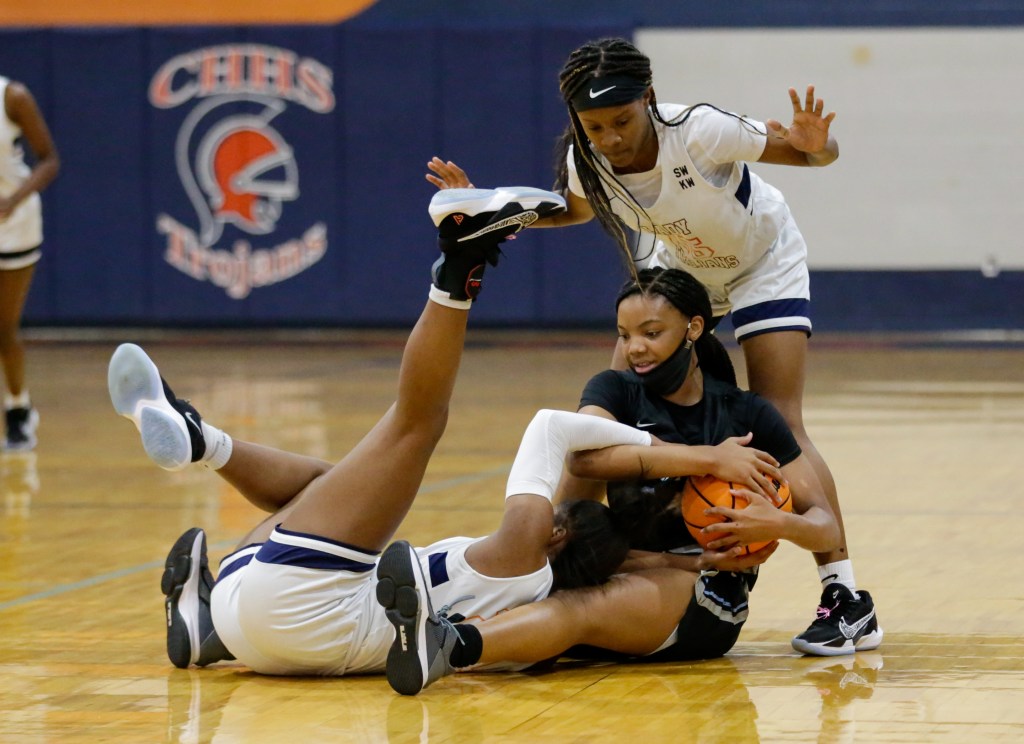 Photos /Dan Smith Kristian Jackson, left, and Makala Hobdy, 15, of CHHS fight for a loose ball along with Erin Martin of Brewbaker Tech.

The Charles Henderson High girls overcame uncharacteristic mistakes to win a 45-38 barn burner against Brewbaker Tech Thursday night in the Southeast Sub-Regional in Troy, sending the Lady Trojans to the Final 8 of the Class 5A AHSAA playoffs.

Improving to 15-2 on the year, CHHS will play Monday at 1 p.m. in Garrett Coliseum in the Southeast Regional finals against Carroll High of Ozark.

The Lady Trojans led by as many as 14 points in the first half, but Brew Tech took advantage of shots that would not go in and other mistakes to go ahead of CHHS in the fourth quarter, before the Lady Trojans regained the lead and pulled away.

“I’m very proud of my girls right now,” said Head Coach Dyneshia Jones. “I know we made a lot of mistakes, and so did Brew Tech, but we prevailed and came out on top. We started off in the second quarter missing a lot of shots, and I told our girls to just stick with our game plan, and we just had to focus on making our shots. The mistakes we were making, we were making on our own, and just giving them some of the points from our mistakes, such as violations and everything else. The things we needed to work on are things we already know. We can’t teach it in a game, and you can’t teach it at halftime. This is postseason, they have got to understand that, and they should have known that a while back.”

CHHS junior Raven Williams hit a three-pointer late in the first quarter to put the Lady Trojans up 14-4, Makala Hobdy scored on a layup, and then dished off an assist to Mileah Ward, who hit a jumper at the buzzer for an 18-4 lead at the end of the first period.

The ball then could not find the bucket for CHHS, as the Lady Trojans scored only four points in the second quarter, with Brew Tech making a charge ending with Isabel Dang hitting a 3-pointer as the buzzer sounded to narrow the lead at 22-19 for CHHS as both teams went to the locker room at halftime.

Kristian Jackson scored on a layup minutes later, drew a foul, and hit a free throw to put CHHS up 39-34 with 2:27 to go in the contest.

Brew Tech trailed by three at 41-38 with less than a minute to play, when Hobdy make a steal and took in down court for the layup and a 43-38 lead with :32 remaining. Jackson later hit two free throws for what would soon be the 45-38 final.

As defending Class 5A state champions, the Lady Trojans have been taught by Coach Jones to stay focused, even during times of adversity.

“I told them that if that ever happened, just keep your head up,” said Coach Jones. “When the other team sees you sulk, when they take the lead, it gives them motivation. So keep your head up and keep pushing.”

Coach Jones has been pleased with the momentum of her team as the playoffs have progressed.

“It’s going great, and there are eight teams left,” said Coach Jones. “It’s just a count down, and one game at a time. The team that makes the less mistakes and scores the most points is going to win. We just have to capitalize and play smart.”

Thursday’s win was also the final home game of the season, extending the unbeaten win streak in Betty Wagoner Hall on the campus of CHHS to seven years.

The last time the Lady Trojans lost at home was in 2014. CHHS is scheduled to play Monday in Montgomery at Garrett Coliseum at 1 p.m. against Carroll High of Ozark.