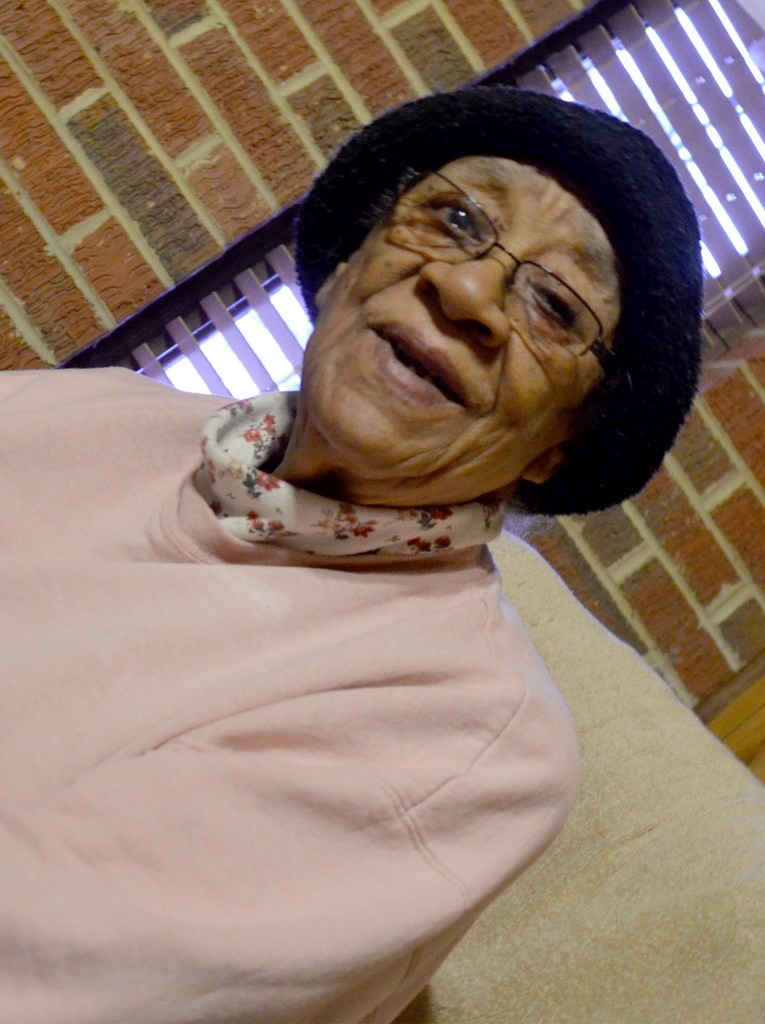 Jaine Treadwell | The Messenger Sweetie Mae Siler lives on land that her daddy gave her before he died and in the house she bought with money earned doing a good day’s work. She cherishes the memories of her child-hood and those of the people she has met along the way.

Sweetie Mae Siler stoked the fire, stood back to watch the flames and then settled back in a soft-stuffed chair.

“Growing up, we lived over closer to Mt. Moriah,” she said. “My daddy farmed; he owned his land. Worked it out. Owning land was important to him. We were the last house on that road. Anybody that wasn’t coming to see us had gone the wrong way. Our mailbox was a cooking oil can on a post and we looked forward to the mailman coming.

“We had lamp light and a big flambeau – kerosene light, on the porch. We’d sit out on the porch at night and that way we could see around us.”

Siler continued to set the stage of her childhood in rural Pike County “back a long time ago.”

“We played hopscotch, made balls out of rags, played in sand beds and dug in the dirt. Played with dolls, too.”

Siler talked of sweeping yards with a stick broom, stacking peanuts and picking cotton, of going to the outhouse and of two springs- “one for water, the other for washing.”

And she talked of polio, the big red measles and other childhood illnesses

“Our ol’ house leaked but not this house, not my house,” Siler said with a smile as she shifted in the chair. “And, I’ve got a bathroom – in the house”

Siler said her daddy gave her the land to build a house before he died.

“I borrowed the money, $12,500, from Region’s Bank and I paid for it working in the lunchroom for the Pike County Board of Education,” Siler said. “I worked 22 years at Shellhorn, one at Goshen and Pike County High school and about eight at Banks. I was made the lunchroom manag-er around 1966.”

Siler said what she remembers most about working in the lunchroom at Pike County schools, was “the rolls and the children.”

“Now, I might forget some of the children because a lot of them came though the lunch line over the years but I won’t forget the rolls,” she said, laughing.

Siler worked in other kitchens around the county including the Holiday Inn.

“That was a busy kitchen,” she said. “On Saturday mornings, we’d have three cooks in the kitchen and I’ve cooked two cases of eggs by myself. I worked at Grimes’ Café, too and First Baptist on Wednesday nights. I never stayed off the job.”

It’s the heartstrings attached to every place she has worked that flood Sweetie Mae Siler’s memories.

“I know and care about a lot of people,” she said. “I enjoyed working and I wanted to work,” but added laughing, “I don’t want to work today.”

Siler said working is what people need to do.

“People need to stay busy and to be around other people,” she said. “Back when I was working, people got along good and would help each other out. I don’t know where all this crazy stuff that’s going on now has come from. Long time ago, times were harder than they are now, but it was a better world than it is today because people cared about each other. We need to get back to caring so we can get this world right again.”