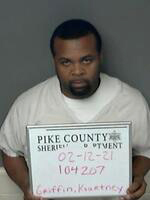 A man has been charged in the Feb. 6 robbery of the Eagle’s Nest in Goshen.

Pike County Sheriff Russell Thomas said a suspect described as a black male about 5-feet and three-to-seven-inches robbed the Eagle’s Nest at gunpoint about 4:40 p.m.

“We were able to locate the vehicle in Cherokee Village,” Thomas said. “We were able to identify Kourtney Griffin as a strong person of interest. From there, he was on the run.”

Thomas said a multi-agency investigation led them to the vehicle and the continued investigation kept the pressure on their person of interest.

“It’s a long process when you start with nothing,” Thomas said. “Buy you have to work it, and keep working it until you get a break. When we found the car, the pressure was on. We had to keep the pressure on. He had family in Montgomery and Birmingham and we talked to them. We had to make it uncomfortable for him to stay in the same place.

“He got tired of running and decided to turn himself in. His brother brought him to us.”

Thomas said Griffin was charged with first-degree robbery and was being held in the Pike County Jail.