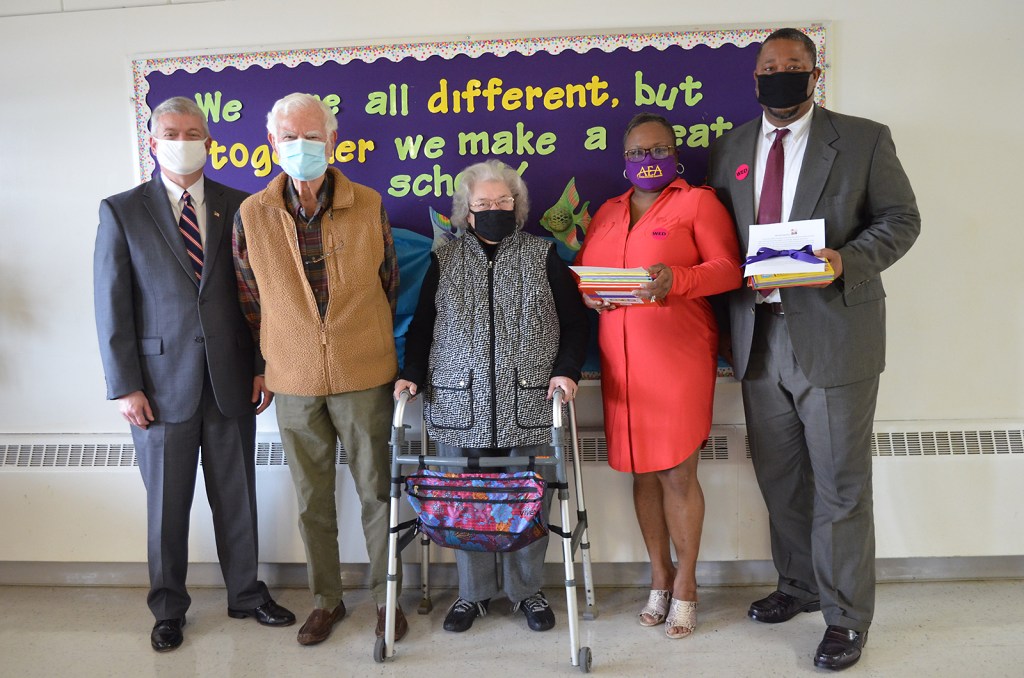 Jaine Treadwell | The Messenger The children of Lawrence and Sara Bowden honored their parents’ 66th wedding anniversary with a donation of sets of children’s classic books to the first-grade classes at Pike County Elementary School. The Bowdens (top) fell in love with books as first-graders at Brundidge Consolidated Elementary School and that love of books and each other is just as strong today Pictured, (above) from left, Ben Bowden, Lawrence Bowden, Sara Bowden, Tracey Arnold, PCES principal, and Rodney Drish, assistant principal. The books were donated by the couple’s children, Ben Bowden, Larry Bowden, Laura Bowden Carpenter and Beth Bowden Welch and in memory of Betsy Bowden.

In the early 1930s, a little girl named Sara and a little boy named Lawrence ….

Sara Dickert and Lawrence Bowden entered first grade at Brundidge Consolidated Elementary School the day after Labor Day in 1930. He was a country boy and she was a small-town girl. Neither could have known, or even imagined, that warm September day was the first day of the rest of their lives together.

On January 22, 2021, Lawrence and Sara Bowden of Brundidge celebrated 66 year of marriage.

Lawrence said, with a teasing twinkle in his eyes, that “it seems more like 120 years.”

If his bride of all those years had heard, she would have quickly responded with “220 years!” And, they both would have laughed.

The ability to laugh together, to sigh together and cry together has held the couple together for more years than either of them could have imagined.

“Sixty-six years?” Lawrence said. “It has been a blessing to have this many years together and to have these years with our children, grandchildren and great-grandchildren.  What a blessing.”

Sara echoed the sentiments of her husband and tied those blessings to their close relationships with family, in church, in school and in community.

“Lawrence’s family moved to town when he was in first grade so, in a way, we actually grew up together,” she said. “We went to ‘weenie’ roasts, played spin the bottle, studied together and court-ed until we were in the 11th grade. He worked ahead and that year went to the University of Alabama and then to Korea.”

Then, we realized then that we were in love and got married,” she said, and added laughing, “sixty-six years of wedded bliss.”

Lawrence and Sara Bowden were honored by their children and grandchildren this week with a rather unique and most unusual 66th wedding anniversary gift. Books for children.

When Sara and Lawrence met in first grade, they made new friends and learned many new things. Both were intrigued by books, the pictures and the written words.

“It was in the first grade that we began a lifelong love affair,” Sara said, with a pause and a smile, “with books.”

“At that early age, we both just fell in love with books. We love to read and to learn and it all start-ed in first grade at Brundidge Consolidated Elementary School.”

The Bowdens passed their love of reading on to their children and to their grandchildren.

There was and is nowhere they would rather be than with a child on the lap and a book in hand.

So, knowing this, when the Bowden’s children were deciding how to make their parents’ 66th wedding anniversary special in this unprecedented year, they tossed around ideas but kept coming back to books.

“To this day, our parents are avid readers,” said Ben Bowden of Andalusia. “And, they have in-stilled the love of reading in all of us. And, their love of reading began in first grade in Brundidge. So, we realized there was nothing our parents would appreciate more and no greater way to honor them than to donate books to the first-grade classes at Pike County Elementary School here in their hometown.”

“We are excited to have this opportunity to build the first-grade classroom libraries,” Arnold said. “Reading the children’s classics is fun, exciting and great encouragement for children to read more. Mr. and Mrs.  Bowden learned to love reading as first graders and have continued to read through-out their adult years.”

The hope of Lawrence and Sara Bowden is that the book donation in their honor will be a beginning of love affairs that will last the children a lifetime.

“Our children could not have given us an anniversary gift that would have been as thoughtful and appreciated as the books for young children,” the Bowdens said. “Our children have honored us greatly with this gift to these little children We love them and thank them. They are blessings to us.”