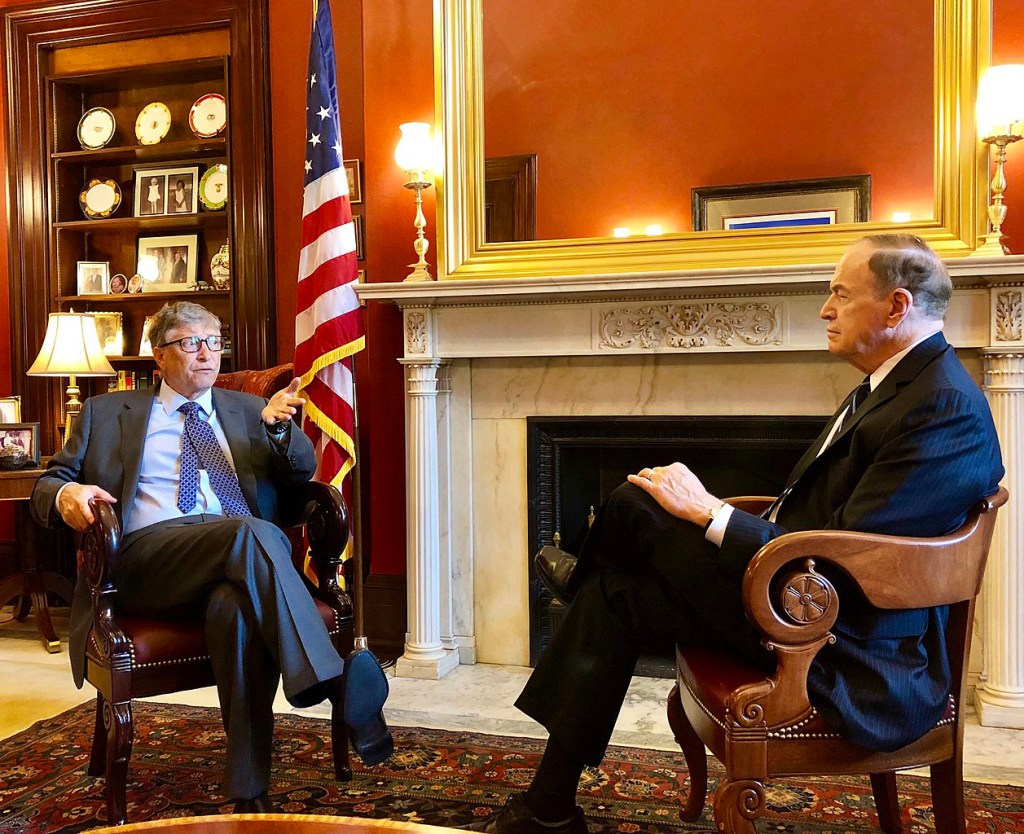 Office of Richard Shelby Microsoft co-founder Bill Gates visited Alabama Sen. Richard Shelby at his Washington, D.C., office in 2018. After Gates’ visit, Shelby tweeted “@BillGates for taking the time to stop by my office and talk with me I applaud him for inspiring people all across the globe with his innovative ideas and generous donations.”

Alabama’s senior U.S. Sen. Richard Shelby has decided its time to retire to the quiet life.

Shelby announced he would not seek a seventh term in the U.S. Senate on Monday.

“I am grateful to the people of Alabama who have put their trust in me for more than 40 years,” Shelby said in a statement.  “I have been fortunate to serve in the U.S. Senate longer than any other Alabamian.  During my time in the Senate, I have been given great opportunity, having chaired four committees: Appropriations, Rules, Banking, and Intelligence.  In these positions of leadership, I have strived to influence legislation that will have a lasting impact – creating the conditions for growth and opportunity.

Shelby’s departure from Washington, D.C., will leave Alabama with no seniority in the senate. In 2020, Sen. Tommy Tubberville, R-Alabama, defeated incumbent Democrat Doug Jones, who had been elected to take former Sen. Jeff Sessions seat in the senate. Sessions resigned to become the U.S. Attorney General for former President Donald Trump.

Former Alabama lawmaker and political analyst Steve Flowers said Shelby was the most influential senator in Alabama’s political history, and his retirement will leave Alabama with little influence in the Senate.

Flowers said Shelby’s influence in Washington, D.C, could be felt across the state. He said Huntsville was built on the defense industry, which Shelby strongly supports. He said the widening and deepening of the state port in Mobile was a result of Shelby’s influence.

“Shelby thinks in terms of hundreds of millions of dollars,” Flowers said. “He put $100 million in the CARES Act for Fort Rucker. The reason for the heavy growth at Sikorsky in Troy is largely due to Shelby. Last year Shelby was able to get a $5 million grant for troy University to do a plastics engineering study for K&W Plastics. What he’s done is endless. You can’t measure his contribution to our area and the state.”

According to a statement from Shelby’s office, the senator has made his top priority national security and expanding economic opportunities throughout the state and country. He has also worked to advance research in education, medical research, space exploration, infrastructure, manufacturing and agriculture.

Flowers said the 2022 elections would be critical for the state in terms of replacing Shel-by.

“Shelby was patient and gained his seniority,” Flowers said. “But, it took him 20 years. That’s just the way it works in the U.S. Senate. I’ve been friends and confidants with him for 35 years, so the people that knew him well knew he planned to retire five years ago. He’ll be 87 when he retires, so you can’t blame him for wanting to have some time for himself.

Flowers said Shelby announced his retirement early so the field could be set for the 2022 election.

“We’re going to have to see how the field develops,” Flowers said. “I think it’ll be about a month before we see the full field. We have to be on the lookout for someone who has personal wealth. That’s true for Senate races across the country. If you have money, you’re in the race. The Washington PACs are waiting to see who wins the primary [before donating money]. But, in Alabama, [a Republican] winning the primary is tantamount to winning the election. We’re just going to have to wait and see how the field develops.”

Shelby concluded his statement by thanking the people of Alabama for allowing him to serve.

“Serving in the U.S. Senate has been the opportunity of a lifetime,” Shelby said.  “I have done my best to address challenges and find ways to improve the day-to-day lives of all Americans.  I have also focused on the economic challenges of Alabamians, increasing access to education and promoting facilities to improve the quality of schools.  I have worked to enhance Alabama’s role in space exploration and the security of our nation.  Further, I have supported the utilization of Alabama’s greatest resources, including its unparalleled river system and the Port of Mobile.

“My service in the U.S. Senate would not have been possible without those who have encouraged me over the years.  I am particularly grateful for the support of my wife, Annette, and my entire family.  Additionally, my staff, whose determination and loyalty have been unwavering, has been absolutely necessary in achieving my goals.

“Although I plan to retire, I am not leaving today.  I have two good years remaining to continue my work in Washington.  I have the vision and the energy to give it my all.

“Thank you again for the honor you have given me – the honor to serve the people of Alabama in Congress for the last 42 years.  I look forward to what is to come for our great state and our great nation.”