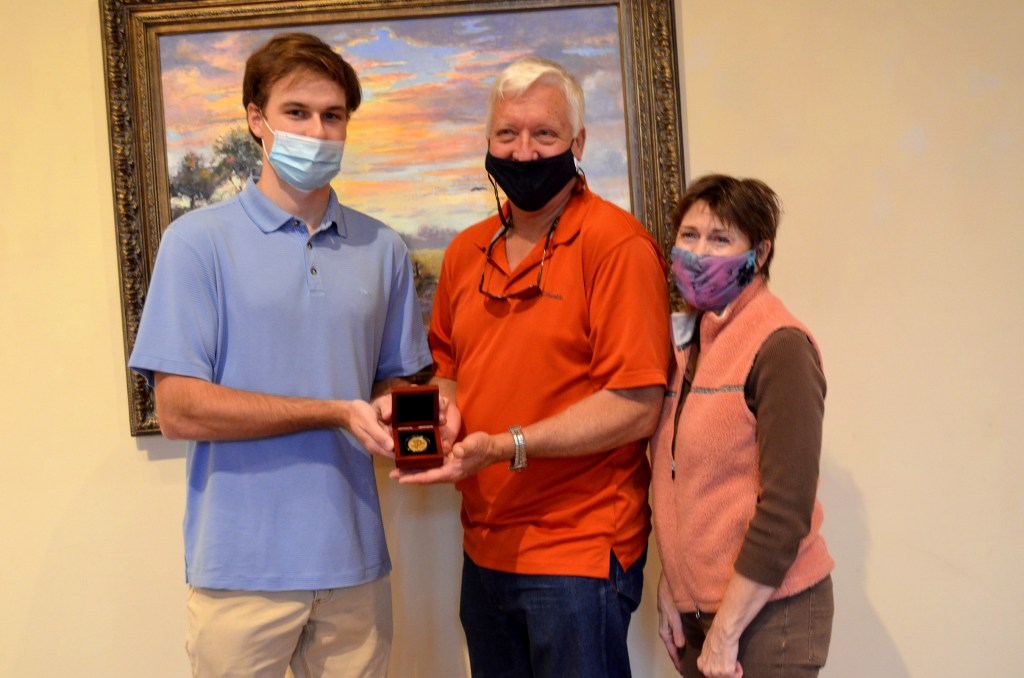 The Messenger | Jaine Treadwell A gold coin valued at more than $2,000 was presented to Joel Kervin, left, the winner of the Gold Coin Drawing fundraiser for the Johnson Center of the Arts. Making the presentation were Carter Sanders, middle, and Day Barnes, JCA board members. (Inset, below) A close-up of the gold coin given to Kervin.

Joel Kervin had a surprise awaiting him.

However, because the answering machine on the home landline phone was turned off, the surprise had to wait.

On Wednesday afternoon, Kervin was presented the surprise, a Walking Lady Liberty gold coin valued at $2,043.

The gold coin was awarded in a drawing at the Johnson Center for the Arts Christmas at the Center event on December 10. But, because, the JCA was unable to notify Kervin, the presentation of the coin was a couple of months late.

Kervin of Troy and a recent graduate of Troy University, laughingly, said he didn’t even know his name was entered in the Gold Coin Drawing.

“My dad, Jeff Kervin, bought tickets and put my name on one of them,” Kervin said. “I’m glad he did. This is the first big thing I have ever won.”

Kervin said, for now, he’s going to put the gold coin in a safety deposit box.

“Then, later, I might consider doing something else but, right now, that’s what I’ll do,” he said.

Kervin is planning a career in the business world and he plans to stay here in Troy.

“Birmingham and Atlanta are not for me,” he said and added laughing. “I don’t want to live anywhere I have to pay to park.”

Brenda Campbell, JCA director, congratulated Kervin on being the winner of the gold coin and wished him all the best as he enters the business world.

“The Gold Coin Drawing was a very successful fundraiser for the JCA,” Campbell said. “The drawing was Carter Sanders’ idea. We were fortunate that the gold coin was donated. The drawing raised $5,650 for operating expenses and programming at the JCA. Because the coin was donated all of the money raised will benefit the arts center.”

Campbell expressed appreciation for the donation and to all of those who made the Gold Coin Drawing a great success.