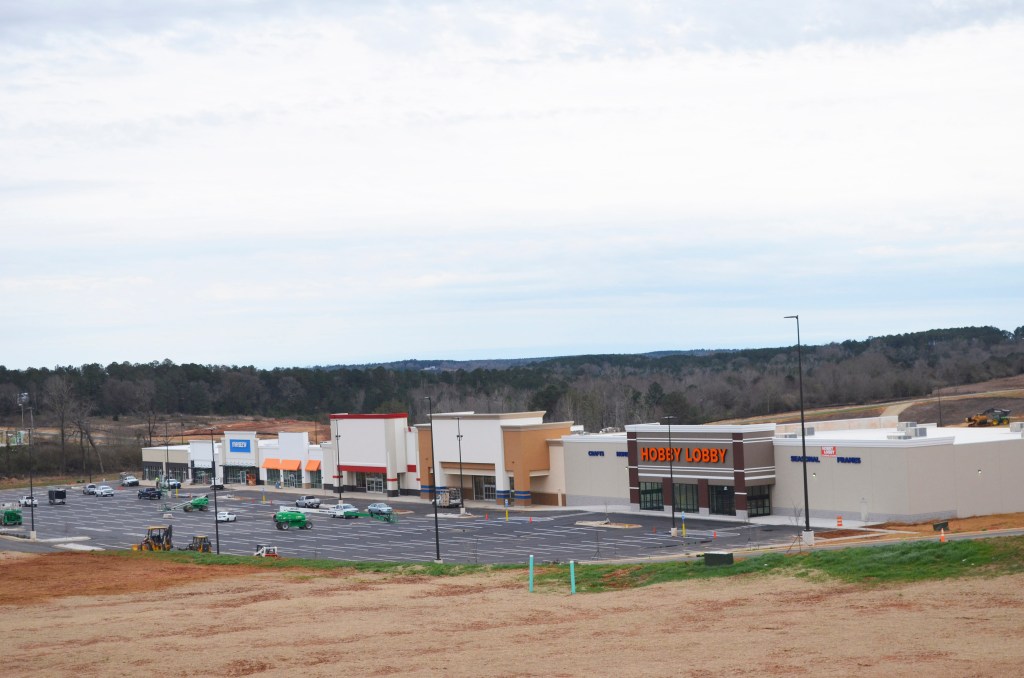 Photo by Jaine Treadwell | The Messenger The Trojan Marketplace, featuring Hobby Lobby, Ulta and TJ Max is scheduled to open sometime this spring.

It won’t be long until the doors at Trojan Marketplace open to the public.

Frontage is already up for some of the retailers that will locate in the new plaza. Troy Mayor Jason Reeves said the shopping center will include Hobby Lobby, TJ Maxx, Ross Dress for Less, Ulta Beauty, Five Below, and Rack Room Shoes.

Just this week, work started on one of the outparcel buildings, fueling rumors that it was a Starbucks.

“I’m not sure what is going in that building,” Reeves said. “But, Starbucks is definitely coming. That’s been confirmed. I think it’s supposed to be off to the right of where the building is going up.”

Hutton Real Estate out of Chattanooga, Tenn., was the developer on the project and Reeves said he hadn’t been updated on all of the outparcels yet. However, he said if work continued on schedule, the shopping center would most likely open in late March or April.

“They were trying to open in the spring,” Reeves said. “But, a lot of that will depend on how the weather affects the work schedule.”

Reeves said he had heard a lot of good things from people about the new development and was excited to see it open.

“Hobby Lobby seems to be something people are excited about,” Reeves said. “The retailers in this shopping center will draw people from about 30 miles around Troy as opposed to those people going to other communities to shop. With this shopping center, we’re providing new opportunities for people to shop local. We want to keep growing our retail shopping and become an area where folks from neighboring communities come to shop.”

Reeves said the COVID-19 pandemic had affected a lot of retail development in Troy. Reeves said the city had several retail projects in the works when the pandemic hit. But, developers weren’t quite ready to pull the trigger on those projects because of the pandemic. He said launching a new retail business depended on customers coming into stores and the pandemic, overall, hasn’t been good for the development. He said as the pandemic, hopefully, winds down, the economy will begin to return to normal and those projects will get back on track.

Trojan Marketplace, Reeves said, stayed on track because of the timing of the deal. Reeves said the project was well underway when the coronavirus began to appear in Asia

“They worked really hard to get those leases secured before COVID,” Reeves said. “When that worked out a little ahead of the pandemic, it made a lot of difference.”

Reeves said even though the pandemic had hit a lot of places hard economically, Troy had weathered the storm fairly well.

“Our property value and sales tax were up about 12 percent in 2020,” Reeves said. “So far, the projections for the first quarter of 2021 look like about a 14 percent increase in sales tax. So, we’re seeing some really, really strong economic indicators. During the pandemic, we kept looking at the sales tax every month and expecting it to tail off. But, it didn’t. I think a lot of that was, in the spring, a lot of people did a lot of home repair and home improvement projects that they had maybe been putting off. Also, I think, people were staying closer to home to shop and we have people from surrounding counties coming here to shop.”

Reeves said he hoped the pandemic would begin to wind down soon, and when it does, he said he hopes the city will be able to make some more retail development announcements in the near future.