Joe Biden to take the Oath of Office 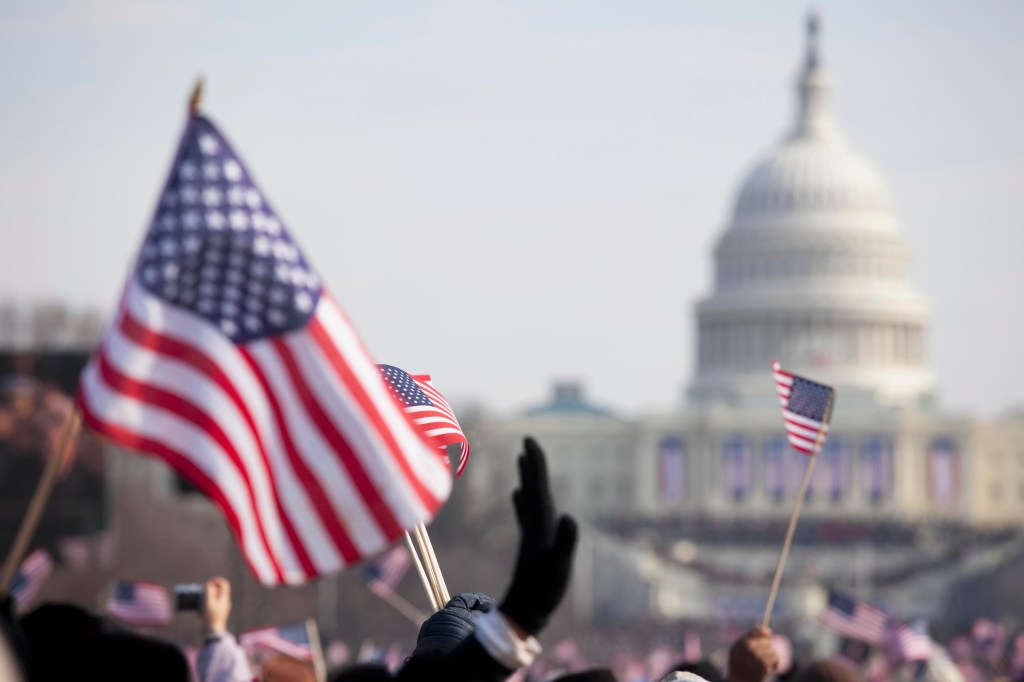 At 12 noon today EST, Joe Biden will be inaugurated as the 46th president of the United States of America and Kamala Harris will be sworn in as vice president.

Biden will arrive at the U.S. Capitol at 11 a.m. and at 11:15 the inauguration program will begin.

Father Leo J.  O’Donovan will give the invocation, followed by the Pledge of Allegiance by Andrea Hall and the National Anthem by Lady Gaga.

A poetry reading will be by Amanda Gorman, followed by a musical performance by Jennifer Lopez. At noon Biden will be sworn in.

Between 2:30 and 3 p.m. Biden will lay a wreath at Arlington National Cemetery’s Tomb of the Unknown Soldier with Kamala Harris and her husband Doug Emhoff, President Barack Obama and Michelle Obama, President George W. Bush and Laura Bush and President Bill Clinton and Secretary Hillary Clinton. Around 3:15 p.m. President Joe Biden and his wife, Jill, will enter the White House and will feature communities around the country.

Joel Williams, a member of the State Democratic Executive Committee, said he has held his breath for four years and (today) he will be able to breathe once more.

Williams said there is no finer gentleman or more dedicated public servant than President-elect Joe Biden.

“On January 19, 2021, Joe Biden will be sworn in as President of the United Sates and he will be everybody’s president just the same as all the other presidents,” Williams said. “I am humbled by the guy. He is an every- day, common man with a steel trap of a brain. He is as smart as he is sincere. All those years he served in the United State Senate, from 1973 through 2009, he rode the train home every night to be with and take care of his children. He’s just that kind of guy.”

Williams said political unrest in the country is nothing new.

“Aaron Burr shot Alexander Hamilton,” Williams said. “There have long been divisions and hostilities in politics. That’s not a new invention. Today, we just have it shoved in our faces 24 hours a day. We need to turn off the TVs and go fishing or play with our kids. That would solve a lot of things.”

Alabama State Representative Wes Allen said one great aspect of the United States Constitution is the peaceful transfer of power.

“Although, I along with 74 million other Americans, did not support or vote for Mr. Biden, he will be president beginning on January 20,”,Allen said. “As we move forward, I hope the Biden administration will protect and defend all of our God given rights enshrined in our Constitution.”

Brundidge Mayor Isabell Boyd said her prayers are that the change in roles will be a smooth transition and there will be unity within the nation.

“As a country, me must put our differences aside and come together and show unity and love,” Boyd said. “Tears come to my eyes when I see what is happening in our country, the greatest country in the world. I’ve lived a long time and I’ve never experienced anything close to what is happening in our country today. There is so much unhappiness where there should be peace and love.”

Boyd said her belief is that the people of Pike County will come together in strong unity.

“We want to be a model of unity for others in our state and our nation,” she said. “We, the people of Pike County, are together. We care about each other and for each other and I thank God for that and pray that nothing ever happens to change that.”

“President Biden and Vice President Harris have been assigned the long and arduous task of healing and restoring the deep divides within our democracy,” Riley said.  “It is a task that we are confident that they can achieve. Now is not the time to rest, we must continue to stay engaged, remain active, and hold our elected officials accountable. Alabama Democrats turned out in record numbers for this election and we have to keep that momentum and stay involved. This historic inauguration is exciting for us all and we can’t wait to witness it!”