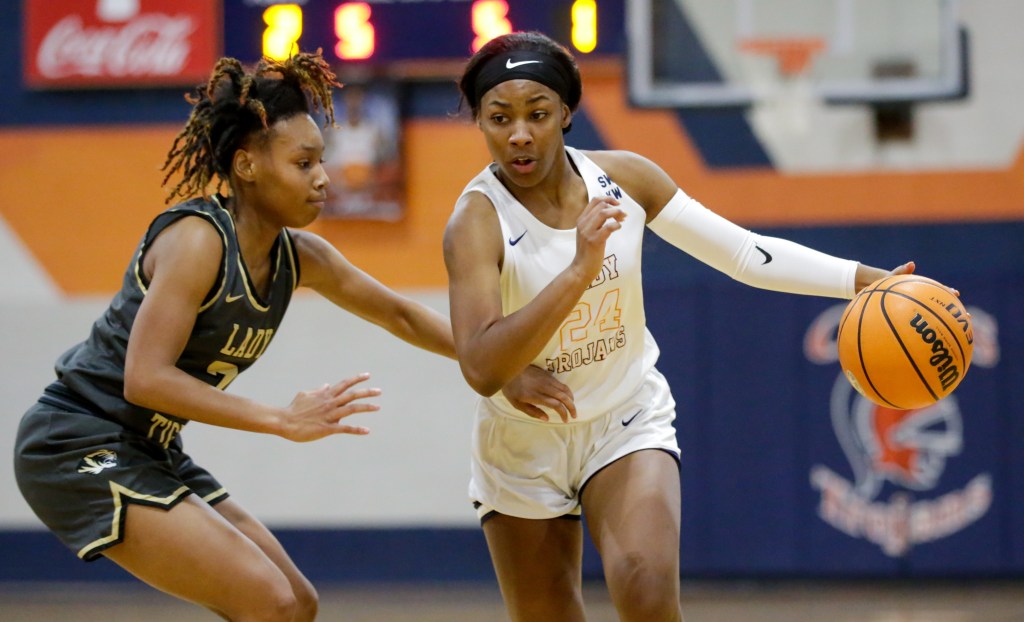 Kristin Jackson of Charles Henderson High, 24, drives the ball inside against Greenville Tuesday night in Troy

The Charles Henderson High Lady Trojans overcame an early 10-point deficit to rout the Lady Tigers of Greenville 69-32 in Betty Wagoner Hall on the campus of CHHS Tuesday night.

Trailing 12-2 at one point in the first quarter, the Lady Trojans rallied to go up 19-12 on a three-pointer by KK Hobdy as the buzzer sounded to end the period.

CHHS, improving to 5-2, extended its lead to 33-20 at halftme, and Hobdy hit another three-pointer as the buzzer sounded to end the third period for a 50-28 Lady Trojan lead.

The offense continued to surge in the final period, en route to the 69-32 final.

Lady Trojan Head Coach Dyneshia Jones Elder was very pleased with the win, the first Class 5A region contest for CHHS, despite the fact that several games this season have been cancelled due to covid among players and coaches.

“I understand (about the cancellations) and it is all about the safety of our students and the U.S. in general,” said Coach Jones Elder. “This year, I hate it has effected the high school and college kids, but it is understandable. Even with me being out, I have been out since Thanksgiving. I commend my assistant coaches because they have been the ones coaching the last two games. This is just something we are going to have to go through.”

Tuesday’s game was the first time all coaches and players have been available since before Thanksgiving.

Although the Lady Trojans are the defending Class 5A AHSAA state champions, they return no seniors from the senior-stacked team of last season. Coach Jones Elder, however, is confident in the future.

“I feel great about the future,” said Coach Jones Elder. “Just as we have lost players, other teams lose them too. We have a young group with no seniors, and I am looking forward to coaching them the next two years.”

The CHHS boys were batting the varsity Greenville boys in the second game at press time.