The Santa among us 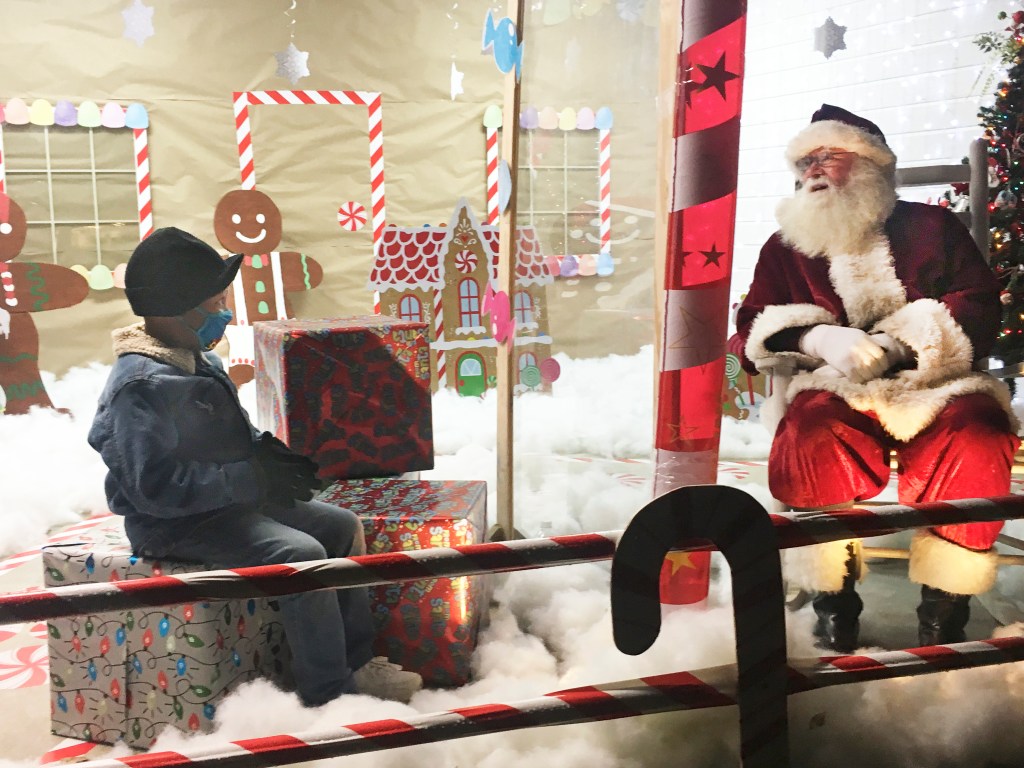 submitted photo | The Messenger Above: Santa Claus visits the Children in Brundidge earlier this month. Jimmy Messick has enjoyed his holiday role for the last 15 years.

Every year around Christmastime, Santa Claus, that magical elf, can be found here and there and everywhere.

Just who is this jolly ol’ elf anyway?

Around Pike County, just ask Jimmy Messick, “Who is Santa Claus?” and he will have to confess.

Messick has been Santa Claus for 15 years and counting. He first donned a borrowed Santa suit to play the role for his granddaughter’s dance class.

Messick has been bearded since back in the 1970s so he was waiting in the wings to play Santa.

“I grew my first beard because I was too lazy to shave,” he said with a ho-ho-ho. “I’ve saved a lot of money by not having to buy shaving cream and razor blades.”

In his earlier days, Messick beard was black but, as he matured, his beard followed suit and began to lighten, then whiten. And, that’s when he qualified to play Santa Claus at the dance class.

“After I played Santa there, I got several calls so I bought a Santa suit,” Messick said. “The more I played Santa, the more I enjoyed it and that’s why I’ve kept being Santa. The kids are wonderful and the things they say … “

Messick said one little boy approached him saying, “Now, Santa, I can explain ….”

How kids approach Santa has changed. They are not a shy and more frank in making their wishes known.

“Kid used to want toys – dolls and tea sets and trucks and rubber balls,” he said. “Now, they want high-priced electronic gizmos and expensive American Dolls. Very young kids ask for iPhone and a lot of things that Santa doesn’t even know about.”

Messick said he can usually tell whether the kids come from urban or more rural areas.
“They want different things — smartphones and golf carts or BB guns and dirt bikes.

Messick, laughingly, said that Santa never makes promises to any. It’s always, “Santa will have to check on that for you.”

After years of being Santa, Messick said this year, the year of COVID-19, has been the most challenging.

“The kids no longer come and sit on my lap and tell me what they want for Christmas,” he said. “I can wish them ‘Merry Christmas’ but I can’t give them a candy cane. I don’t know if being Santa will ever be the same again.”

But, Messick said something good has come from the changes.

“Most of the time, the kids come and stand beside Santa and that makes for a nice picture,” he said. “Usually, the kids are dressed to have their pictures taken with Santa so, now, with them standing, mama and grandmother can see their Christmas outfits and that makes them happy.”

And, Messick said the kids are happy just visiting with Santa but are disappointed in not getting a candy cane.And, Santa is happy, too, because some kids are just too big to sit on Santa’s lap, Messick said, with a “Ho! Ho! H! and Merry Christmas to All!