‘Mr. Charles was one of the best and greatest Trojans’ 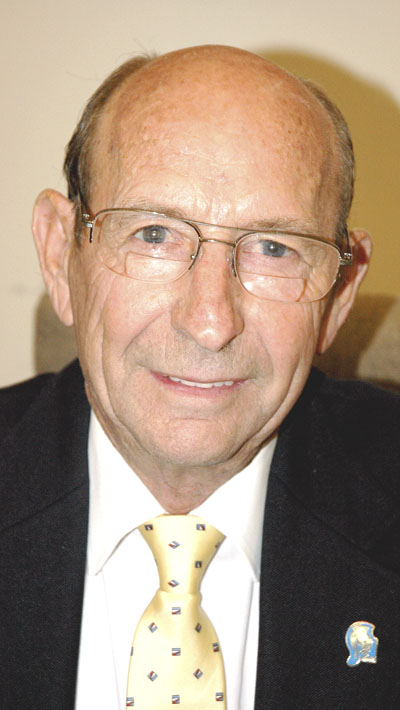 Charles Meeks, the longest serving elected official in the history of Troy, passed away on Wednesday.

“Mr. Charles was one of the best and greatest Trojans there ever ways,” said Troy Mayor Jason Reeves. “There are so many things that happened in the community over the years that he was a critical part of.”

Meeks left office in 1985, but was elected to the City Council in 1988, where he served six terms until retiring in 2012, completing more than 33 years in public service.

“So many things happened during those years,” Reeves said, adding that Meeks also served on the Board of Directors of Southeast Alabama Gas District when a crucial decision was made to invest in more gas wells. “That created a tremendous amount of income to the cities who are in the district, including his hometown of Opp and his adopted hometown of Troy,” Reeves said. “Millions of dollars have been returned to the taxpayers over the years because of that decision.”

Meeks also played a critical role in the move to Division 1A athletics at Troy. University in the early 2000s by helping secure and guarantee city support for the move.

“I learned a tremendous amount from him,” Reeves said, adding that three generations of his family worked and served with Meeks over the years. “Mr. Charles worked so hard; he never failed to return a call and was always there when you needed him. He gave me so much good advice over the years, and he did that for so many people … but he did it in a quiet way and probably doesn’t get the credit he deserves.”

That’s why city named the street in front of City Hall in his honor, Reeves said. “It’s on all our official city letterhead and whenever I sign something on letterhead, Mr. Charles’ name is there.”

Johnny Witherington is one of the fortunate ones who knew Meeks when he was a young boy and also in his manhood as a mentor,  as a friend and as a community servant.

“I knew Charles and Josephine when I was a young boy,” said Witherington, who also served more than 30 years in city office with Meeks.

“I would see Charles all the time when he and John Harvell were in the pest control business (Meek’s Pest Control). They would come by my daddy’s service station to get gas and tires. Charles always made me feel good. He encouraged me just by speaking to me but he also would ask me how I was doing and what I was doing in school. That made me feel very special.”

Witherington said Meeks was the kind of mentor that is needed in the lives of young people.

Witherington said when he moved up in age and got married, he continued to be friends with Charles and Josephine Meeks.

“Charles was a good friend, a close friend,” he said. “We were in the Rotary Club together and I learned a lot from him by the way he lived his life and served our community. I was fortunate to have the opportunity to serve with Charles on the Troy City Council and I learned a lot about city government from him. He lived a caring life and my life is better because I knew him as my friend. I will miss Charles and will always treasure his friendship over those many years.”