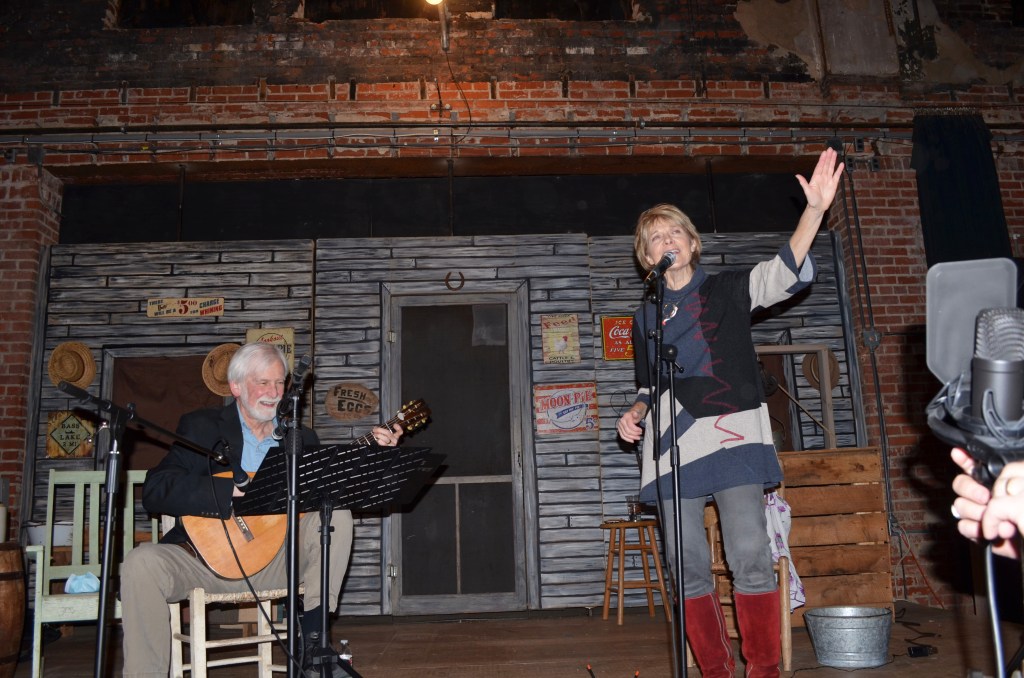 Photo/Jaine Treadwell Dolores Hydock (right) and Bobby Horton (left) perform ‘A Christmas Journey’ at the We Piddle Around Theatre on Tuesday night in Brundidge.

The We Piddle Around Theater in Brundidge hosted “A Christmas Journey,” WTBF Radio broadcast featuring nationally acclaimed storyteller Dolores Hydock and multi-instrumentalist Bobby Horton on Tuesday night. Several members of the sponsoring Brundidge Historical Society attended and listened along with the radio audience. Future broadcast will be announced.

Doc Kirby and John McCall of WTBF Radio broadcast live from the We Piddle Around Theater.

Usually, when the doors of the We Piddle Around Theater are opened, it is to a packed house. But on Tuesday night, there was only a small, scattering of people.

The stage was dimly lit and in a bit of disarray with leftovers from a previous show, instrument cases and a mass of microphones.

But, the when the stage lights came, something magical happened.

Nationally acclaimed storyteller Dolores Hydock and multi-instrumentalist Bobby Horton brought to WTBF FM 94.7’s listening audience a charming and heartwarming story about a cowboy whose perfect plan for a foot-stompin’ good time on Christmas Eve got derailed by an unexpected detour.

“Together, Dolores Hydock and Bobby Horton were magical,” said Doc Kirby, WTBF. “They took us back to the days of old radio. I’m familiar with the story of ‘Stubby Pringle’s Christmas’ by Jack Shaefer but to hear it performed for radio in such a wonderful way was Christmas magic.”

Kirby said he could visualize a cowboy out on horseback on a desperately cold night with plans a foot-stompin,’ gal swingin’ good time, only to find himself the answer to an old woman’s prayers.

Bill Caldwell, a dedicated and Sirius radio listener, said, as Hydock told the story of that icy, cold Christmas Eve night, he was able to visualize Stubby Pringle’s journey to Christmas and Horton’s guitar music was a fitting backdrop to the story.

“What is good about radio, is that you can visualize the characters and create your own,” Caldwell said. “The way I visualized Stubby Pringle was like no one else would, so the story was very personal to me and to everyone who was fortunate to tune in to WTBF Tuesday night.”

For me, Anne Register, who listened inside the theater, the radio play was a special  and meaningful way to celebrate Christmas.

“Dolores Hydock is a wonderful storyteller,” Register said. “I could actually feel the emotions that Stubby was experiencing and see the story as it was being told. It was Christmas magic. It was inspirational.”

Ursula Bryant was in Kentucky and streamed the radio program.

“It was super clear and awesome,” Bryant  said. “It was fantastic to hear the story over the radio. It was a unique experience.”

Lawrence Bowden, BHS president, expressed appreciation to WTBF for broadcasting “Live from the We Piddle Around Theater.”

“WTBF made this performance possible,” Bowden said. “Because of COVID-19, we’ve had to cancel all our fall and winter events and that has been very disappointing. But, we wanted to express our appreciation to the many who have supported us here at the theater for 20 years. We could find no better way to say ‘thank you’ than with a live radio broadcast and no better performers than Dolores Hydock and Bobby Horton say it for us. We wish everyone a Merry Christmas with hopes for a brighter and better New Year.”