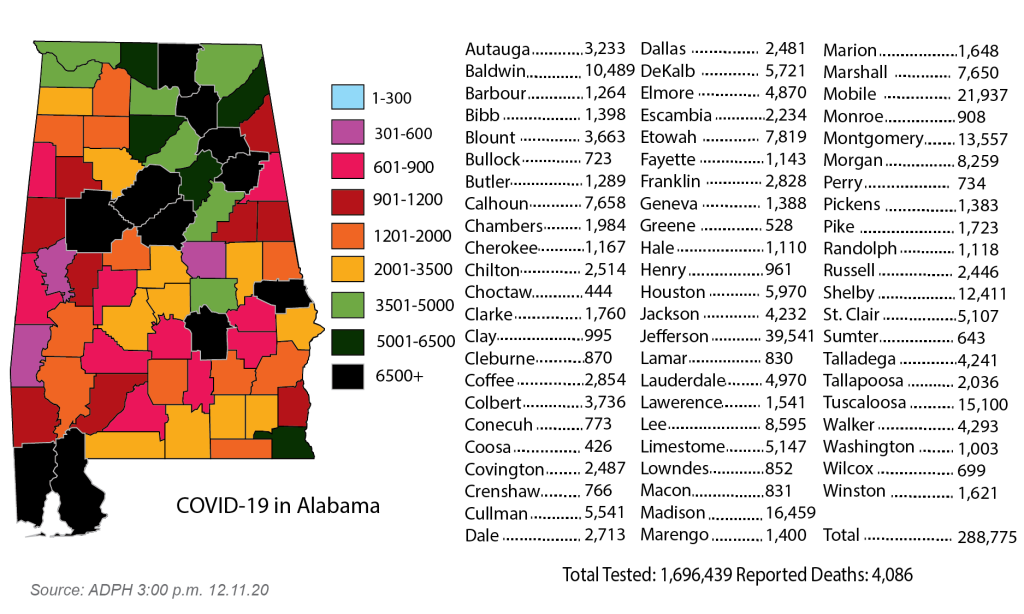 Medical officials on Friday pleaded with people to forgo Christmas parties and large gatherings as the state faces a record-setting surge in COVID-19 cases that looks to only get worse.

Dr. Mark Wilson, the health officer for Jefferson County, delivered the plea in a press conference with doctors from UAB Hospital in Birmingham as the state set multiple COVID-19 records in the wake of Thanksgiving gatherings.

“Holiday parties are just not a good idea right now,” Wilson said. “This Christmas please have a small gathering with just those people who live in your household.”

Wilson said he understands this is an additional sacrifice after people have already changed so much of their daily lives, but said it is needed to keep people alive until there is access to the vaccine.

Alabama this week hit record highs for daily cases and the number of COVID-19 patients in state hospitals and as well as a jump in the number of reported deaths. The seven-day rolling average of daily deaths in Alabama has risen over the past two weeks from nearly 22 deaths per day on Nov. 26 to almost 37 deaths per day on Dec. 10.

The state also set a record low for the percentage of intensive care beds available with 7% of ICU beds empty statewide Pike County added 11 additional cases on Friday, as the state reported 3,853 additional cases and 2,111 hospitalizations. The number of COVID-19 patients at UAB has doubled since Thanksgiving, and hospitals officials said projections indicate it could double again by Christmas.  “Most of these cases are attributable to travel and small gatherings,” said Dr. Sarah Nafziger, co-chair of UAB’s Emergency Management Committee.

Nafziger urged people to treat everyone they encounter as if they have COVID-19 by wearing a mask and socially distancing.  “We’ve got to stop this now,” Nafziger said.

Since the pandemic began, the state health department has reported more than 280,000 confirmed and probable virus cases.

and more than 4,000 confirmed and probable virus deaths in Alabama. While the virus causes only mild or moderate symptoms in most people, it can be deadly for the elderly and people with other, serious health problems.

The doctors said the bright stop on the horizon is the coming vaccine, although it is expected to be some months before it is available to the average Alabamian.

“It’s likely to be early summer before we have enough for the average Alabamian to receive their vaccine,” Harris said Wednesday.