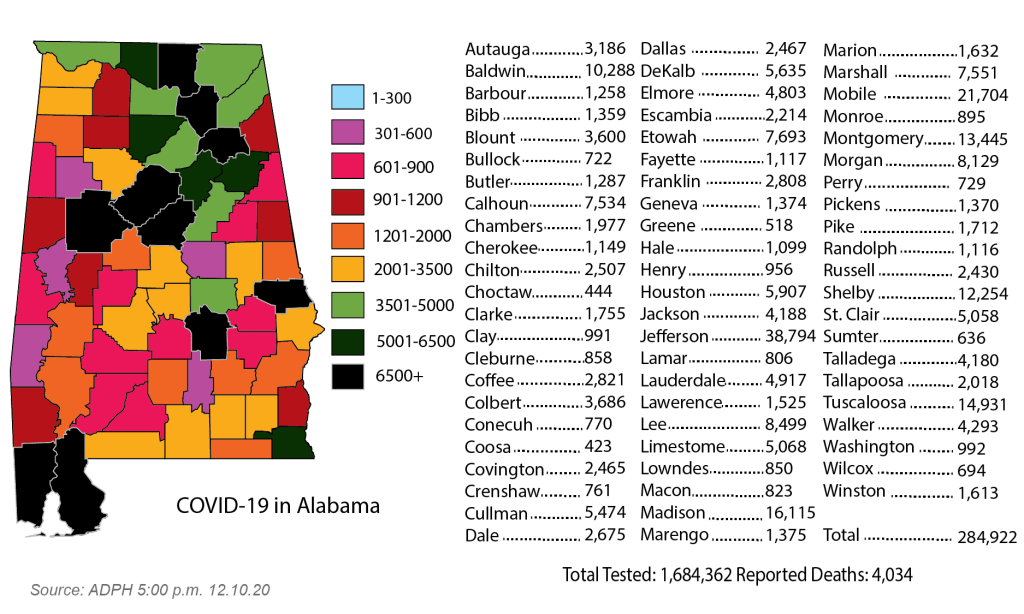 Just when the U.S. appears on the verge of rolling out a COVID-19 vaccine, the numbers have become gloomier than ever: Over 3,000 American deaths in a single day, more than on D-Day or 9/11. One million new cases in the span of five days. More than 106,000 people in the hospital.

The crisis across the country is pushing medical centers to the breaking point and leaving staff members and public health officials burned out and plagued by tears and nightmares.

All told, the crisis has left more than 290,000 people dead nationwide, with more than 15 million confirmed infections.

The U.S. recorded 3,124 deaths Wednesday, the highest one-day total yet, according to Johns Hopkins University. Up until last week, the peak was 2,603 deaths on April 15, when New York City was the epicenter of the nation’s outbreak. The latest number is subject to revision up or down.

New cases per day are running at all-time highs of over 209,000 on average. And the number of people in the hospital with COVID-19 is setting records nearly every day.

In Alabama, more than 4,000 people have died due to the virus this year. The Alabama Department of Public Health reported 49 new deaths on Thursday, bringing the state total to 4,034.

A U.S. government advisory panel convened on Thursday to decide whether to endorse mass use of Pfizer’s COVID-19 vaccine to help conquer the outbreak. Depending on how fast the FDA signs off on the panel’s recommendation, shots could begin within days, inaugurating the biggest vaccination campaign in U.S. history.

The meeting of outside advisers to the Food and Drug Administration represented the next-to-last hurdle before the expected start of the biggest vaccination campaign in U.S. history. Depending on how fast the FDA signs off on the panel’s recommendation, shots could begin within days.

The FDA panel functions like a science court. During the scheduled daylong session, it was expected to debate and pick apart the data — in public — on whether the vaccine is safe and effective enough to be cleared for emergency use. With unprecedented interest in the normally obscure panel, the FDA broadcast the meeting via Youtube, and thousands logged on.

“The American public demands and deserves a rigorous, comprehensive and independent review of the data,” said FDA’s Dr. Doran Fink, who described agency scientists working nights, weekends and over Thanksgiving to get that done.

The FDA is not required to follow the committee’s advice but is widely expected to do so. Once that happens, the U.S. will begin shipping millions of doses of the shot.

Later this month, the FDA is expected to pass judgment on another vaccine, developed by Moderna and the National Institutes of Health, that has proved about as protective as Pfizer’s.

Vaccine candidates by Johnson & Johnson and AstraZeneca are also in the pipeline.

The initial supplies from Pfizer and Moderna will be limited and reserved primarily for health care workers and nursing home patients, with other vulnerable groups next in line until the shots become widely available on demand, something that will probably not happen until the spring.

The meeting of experts on vaccine development, infectious diseases and medical statistics came as the coronavirus continues surging across much of the world, claiming more than 1.5 million lives, including about 290,000 in the U.S.

Hanging over the meeting was a warning from British officials that people with a history of serious allergic reactions shouldn’t get the vaccine. Government authorities there are investigating two reports of reactions that occurred on Tuesday when Britain became the first country in the West to begin mass vaccinations against the scourge.

Pfizer representatives told the panel they are aware of the British reports but have seen no signs of allergic reactions in their trial of the vaccine.

FDA said results from Pfizer’s large, ongoing study showed that the shot, which was developed with Germany’s BioNTech, was more than 90% effective across people of different ages, races and underlying health conditions, including diabetes and obesity. No major safety problems were uncovered. Common side effects included fever, fatigue and pain at the injection site.

“The data presented in the briefing report were consistent with what we heard before and are really exciting,” said Dr. William Moss, head of Johns Hopkins University’s International Vaccine Access Center. “Nothing that I see would delay an emergency use authorization.”

The meeting also represented an opportunity for regulators to try to boost public confidence in the breakneck development process that has produced the Pfizer vaccine and a string of other upcoming shots with remarkable speed — less than a year after the virus was identified.

The FDA has also faced weeks of criticism from President Donald Trump for not rushing out a vaccine before Election Day.

“There have been a lot of questions about why it takes us so long or are we being rigorous enough?” FDA Commissioner Stephen Hahn said in an interview. “I’m hoping that people will see with our transparency that we have taken a very rigorous stance on this.”

Hahn said the agency had already teed up the process to authorize the vaccine by filling out all the legal paperwork in advance, regardless of the ultimate decision.

The FDA uncovered no major safety problems in its review of Pfizer’s 44,000-person study, including no allergic reactions of the type reported in Britain. But such studies can’t detect rare problems that might only affect a tiny slice of the general population.

FDA reviewers noted four cases of Bell’s palsy that occurred among people getting the vaccine. They concluded the cases were probably unrelated to the vaccine because they occurred at rates that would be expected without any medical intervention. But the agency did say cases of the nerve disorder should be tracked, given that other vaccines can cause the problem.

The FDA found the vaccine highly effective across various demographic groups. But it is unclear how well the vaccine works in people with HIV and other immune-system disorders.

The study excluded pregnant women, but experts were expected to tease apart the data for any hints in case women get vaccinated before realizing they’re pregnant.

A study of children as young as 12 is underway.

Answering some of these questions will require keeping Pfizer’s study going for many more months. And the FDA has made clear it wants vaccine developers to continue tracking people who got their shot and those who received a placebo for as long as possible, to compare their outcomes.

But Pfizer and BioNTech said Thursday they have an “ethical responsibility” to switch the 22,000 placebo recipients to real shots after FDA gives the vaccine its OK.

In a compromise, the companies proposed moving those patients to the vaccine group gradually, giving participants priority according to age, health conditions and other factors. Under that plan, 70-year-old participants would cross over before healthy 30-year-olds.

AP writer David Koenig contributed to this story from Dallas.

The Associated Press Health and Science Department receives support from the Howard Hughes Medical Institute’s Department of Science Education. The AP is solely responsible for all content.