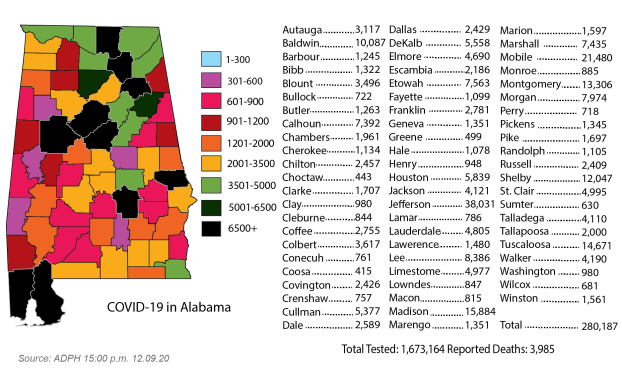 Ivey: ‘These are some of our darkest days’

MONTGOMERY, Ala. (AP) — Gov. Kay Ivey on Wednesday extended a statewide mask mandate until Jan. 22 — but declined to order additional restrictions — as Alabama experiences a record-setting surge in COVID-19 cases and hospitalizations.

Ivey announced the six-week extension during a news conference at the Alabama Capitol. The order, which requires face coverings to be worn in public when interacting within 6 feet (2 meters) with people outside your household, had been scheduled to expire Friday.

The Republican governor said while vaccine availability is “just around the corner” and the state has to weather the upcoming months.

“These are some of our darkest days since COVID-19 became a part of our daily conversations and the rising number of new cases has put a strain on our healthcare system unlike any time in recent memory,” Ivey said.

Pike County added 18 cases to its COVID count on Wednesday, as the virus surged across the state.

According to the Alabama Department of Public Health 10 a.m. update, 3,522 new cases were reported Wednesday, continuing a trend of plus-3,000 days for cases.

Hospitalizations rose to 2,097, more than 500 more than the state saw during the July peak. Deaths climbed to 3,985, including 16 confirmed COVID-related deaths in Pike County.

Ivey urged people to wear masks and wash their hands to try to limit the spread of the virus. The drawling 76-year-old governor took a mild swipe at social media commenters who sometimes call her by a nickname for a southern grandmother while criticizing her COVID orders.

“I’m not trying to be Governor Mee-Maw as some on social media have called me. I’m just trying to urge you to use the common sense the good Lord gave each of us to be smart and considerate of others,” Ivey said.

Ivey declined to issue any new restrictions. Much of California is under a sweeping new lockdown in an attempt to slow the rise of virus cases.

The Republican governor issued a stay-home order at the beginning of the pandemic, but has resisted any additional shutdowns since that expired. Ivey said Wednesday that she has not seriously considered another lockdown.

Alabama this week hit a record for the number of people in state hospitals with COVID-19 with more than 2,000 people hospitalized. The state also saw a record number in daily cases with more than 3,000 new infections being reported daily.

“If you had a 747 crash every month for the last 10 months, that’s about how many people we’ve lost in our state,” Harris said.

While the virus causes only mild or moderate symptoms in most people, it can be deadly for the elderly and people with other, serious health problems.

“It’s likely to be early summer before we have enough for the average Alabamian to receive their vaccine,” Harris said.

TURKEYS FROM HEAVEN: Organizers: Help needed now, more than ever

Even with so many annual 2020 events being canceled due to the coronavirus, Kelly Sanders didn’t think twice about cancelling... read more