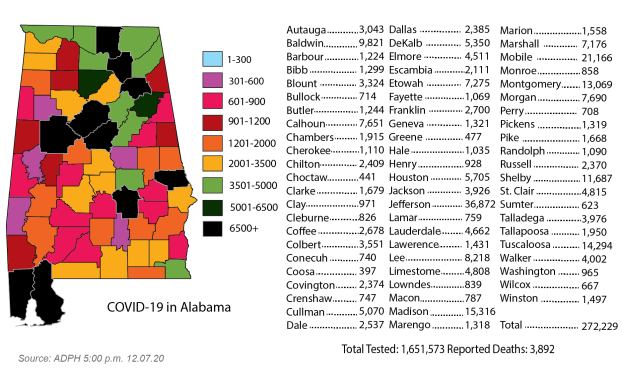 MONTGOMERY, Ala. (AP) — Alabama on Monday set a record of more than 2,000 COVID-19 patients in state hospitals as some facilities began to postpone non-emergency procedures amid staff shortages.

There were 2,079 patients in state hospitals with COVID-19 — the highest number since the pandemic began, according to state numbers from the Alabama Department of Public Health. Dr. Don Williamson, the former state health officer who now heads the Alabama Hospital Association, said at least three hospitals have begun to postpone non-emergency procedures amid staff shortages.

“My real concern is I still don’t see anything to break the spread between now and getting through Christmas. That’s my real concern, and frankly I’m increasingly frustrated about why it is so difficult for individuals to be willing to wear masks,” Williamson said.

“The election’s over. It should no longer be political. People are dying, and we can do better than this.”

Williamson said staffing availability is a major concern. He said some facilities have as many as 100 staff members out with COVID-19.

Decatur Morgan Hospital President Kelli Powers said in a Monday briefing to local news outlets that the north Alabama hospital is beginning to struggle with staffing, has had to create additional intensive care unit beds and had to borrow two ventilators.

She said the hospitals is facing competition with states for nurses who can make large sums by working as travel nurses out of state, she said.

“This is a dire emergency for our state. … I know money is important but it’s not everything when you have people dying in your community,” Powers said.  The University of Alabama at Birmingham Hospital on Monday said it had 130 patients who have tested positive for COVID-19, another record for the hospital.

In intensive care units across the state, 35% of patients have COVID-19, Williamson said. Only 11% of the state’s 1,634 intensive care beds were empty Monday, he said. The state’s low came on Dec. 3 when only 138 ICU beds, about 8% of total capacity, were empty,

A statewide order requiring face masks in public expires Dec. 11, but Republican Gov. Kay Ivey could extend the mandate for additional weeks as she has done in the past. Medical officials have encouraged Ivey to extend the order.

Santa Claus paid a visit to the town of Brundidge on Friday evening. People of all ages came out Knox... read more