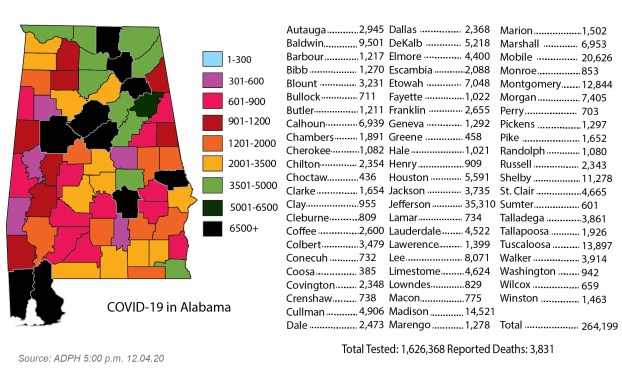 Dr. Sarah Nafziger, who teaches emergency medicine at the University of Alabama at Birmingham, told an online news briefing it was “critically important” for Gov. Kay Ivey to extend the mask requirement, which is opposed by some who consider it an infringement on personal rights or discount the threat of the coronavirus.

“A lot of people like to argue that masking is not helpful, that it’s a bunch of voodoo,” Nafziger said. “I’m here to tell you that the science shows that it works.”

Alabama added 3,840 new cases on Friday as the 7-day average for new cases rose past 3,000 for the first time, according to the Alabama Department of Public Health.

“We would support one probably through January. The situation is slipping rapidly in the wrong direction,” Williamson said.

The order, which expires Dec. 11, requires anyone older than 6 to wear a mask in public spaces indoors and outside if they can’t socially distance. First imposed in July, health officials credit the mandate with a sharp decline in cases until a recent spike began nationwide.

Dr. Scott Harris, head of the state health department, said the decision of whether to extend the order ultimately rests on the Republican governor, who publicly encouraged mask wearing in recent days while saying she would not shut down the state’s economy again.

“I would say unequivocally in public health we believe masks work,” Harris said at a news briefing. “I don’t have any indication the mask order is going to go away, particularly given the kind of numbers we are seeking right now.”

The state health department has reported more than 264,000 confirmed and probable cases and at least 3,831 confirmed and probable deaths, and Alabama is setting coronavirus records almost daily. More than 4,000 new cases were reported Thursday, an increase of more than one-third within just a week and before an expected spike in cases related to Thanksgiving gatherings.

“Unfortunately, we have very difficult times ahead this month and as we get into winter. We are seeing numbers like we haven’t seen before,” Harris said.

Officials say vaccines could be shipped to Alabama as early as next week if they are federally approved, but initial doses will be reserved for health care workers who are most at risk for contracting the virus. Widespread distribution among the general public isn’t expected before spring.

Dr. David Hicks, deputy health officer in populous Jefferson County, which has reported more than 35,000 cases and more than 500 deaths, said public health officials are trying to “buy time” until the vaccines are distributed by encouraging mask wearing, hand washing and social distancing.

With state hospitals filling up with COVID-19 patients, officials have discussed plans for setting up field hospitals to accommodate patients who can’t get into regular beds. Such contingencies are typically difficult and less desirable than regular treatment wards, Hicks said.

Find AP’s full coverage of the coronavirus pandemic at https://apnews.com/hub/coronavirus-pandemic.

The Troy Trojans look to knockoff their in-state rival for the third consecutive time when they take on South Alabama... read more