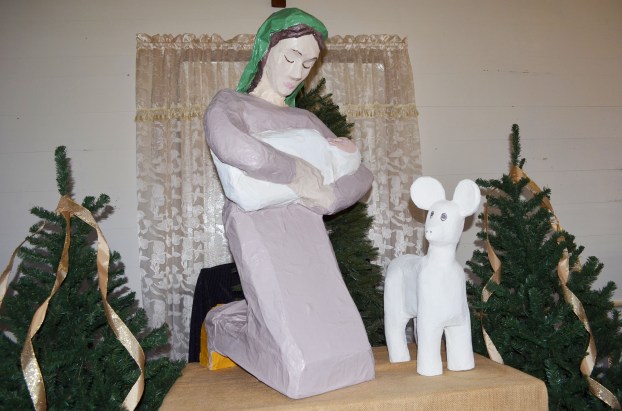 If ever there has been “a place of quiet rest” it’s tucked away on the Chunnenugee Ridge in Northern Pike County.

On most Sundays, the historic Baptist Church now sits quietly. Its doors are shut and the bell in the tower is silent.

But, on this Sunday, as on other First Sundays, the church bell will ring and the doors of historic Orion Baptist Church will open. And this place of quiet rest will come alive with the sound of music. The old church building is much as it was when it was completed in 1858. Men folk will sit on one side of the divided pews and the women on the other, just as they did more than 100 years ago and more.

Soloman Siler, owner of the Siler House in Orion, contributed to the church house. He had the church bell brought from England and the tolling of the bell was and is an invitation to worship.

“There are old records of the church that have listings of donations that include chickens and eggs and there is a record of who fed the preacher and on which Sundays,” Roling said. “Records also show that Orion Baptist Church was constructed more than 160 years ago at a cost of $1,250.”

Orion Baptist Church is one of the oldest churches in Pike County andwill celebrate the coming of the Christmas season just as it has for nudging at two centuries …with great joy.

Richard Girdner leads the singing and preaches the first Sunday services at Orion Baptist Church, but declares that he is “not a preacher.” However, his congregation will vouch that “yes, he is.”

Girdner is also an artist – a creator.

And, in the unprecedented year 2020, he has used his talent to give an old church a new look.

“Orion Baptist Church ain’t ever looked like this before,” Girdner said, with a smile. “There truly are angels among us.”

Girdner has perfected the crafting technique of using paper and paste to create objects. With old newspapers, he has created a variety of papier mache figures that have been displayed around Pike County over the years.

But, never before has he created a grouping of paper figures that, so uniquely, tell the story of the birth of the Savior of the World, as those in Orion Baptist Church.

With eyes closed and memory stirred, it’s possible to hear the angel speaking, “…, “I bring you good tidings of great joy …for unto you is born this day in the city of David a Savior, which is Christ the Lord. And this shall be a sign unto you; ye shall find the Babe wrapped in swaddling clothes, lying in a manger.”

For Girdner, the grouping of angels, Mary and the Baby Jesus, and lambs was a labor of love. It was a different way of sharing the birth of Jesus.

“No,” Girdner said, with a smile, “Joseph is not here. Just Mary and the Baby Jesus and the angels who came to proclaim the birth of our Savior. That’s the story of Christmas.”

“Jesus is the Lamb of God who takes away the sins of the world,” Girdner said.

So, there, in one of the oldest churches in Pike County, is a new way of telling the story of Christmas.

But the story never grows old. No matter how it’s told or how many times it’s told. On Sunday, December 6, the church bell will ring and the doors will open to all who come to Orion Baptist Church to hear the Christmas story told and the Lighthouse String Ensemble sing those old-time hymns as Christmas comes to the ridge.