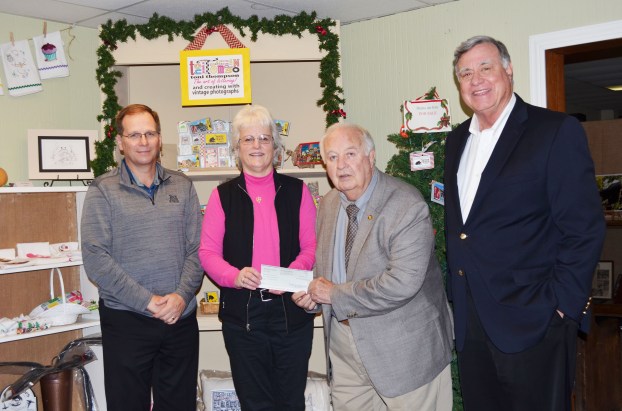 Barbara Tatom, director of the Pioneer Museum of Alabama, received the $15,000 gift from Sen. Jimmy Holley on Thursday. Joining them were Jeff Kervin, chairman of the museum board, and Steve Flowers, former lawmaker and museum supporter. Tatom said the gift is “greatly needed” at the museum, which has been called a “treasure of Pike County.”

Alabama Sen. Jimmy Holley, R-Elba, was at the Pioneer Museum of Alabama Thursday to present a $15,000 check in support of the museum’s projects and programs.

Holley, a longtime advocate of Pike County’s local and tourist attraction, said the funds were made available through Gov. Kay Ivey and the CARES Act.

“Over the years, I have watched the growth of the Pioneer Museum of Alabama and what it means to Troy, Pike County and the surrounding counties,” Holley said. “I am intrigued by the number of local and out-of-state visitors who take advantage of the opportunity to learn more about those who pioneered Alabama.”

The Pioneer Museum is incentive for travelers to stop in Pike County and, when they do, the dollars they spend for gas, meals and lodging support the local economy, Holley said.

“The Pioneer Museum of Alabama provides a place of learning for young people and of remembrance for those of us who are older.”

Holley said the Pioneer Museum of Alabama will continue to be a “treasure” for Pike County, perhaps, even more so as the years go by.

Jeff Kervin, chairman of the museum’s board of directors, expressed appreciation to Holley for his support of the museum and role he played in the awarding of the CARES Act grant.

“The funds will be put to good use,” Kervin said. “We have a variety of projects on the drawing board but have not designated a specific use for these funds.’

Kervin said one project the board is considering is ADA compliant restrooms.

“But, we also have repairs that need to be made on several of the historic buildings on the grounds,” he said. “There is always maintenance that needs to be done and programing throughout the year.

Kervin said COVID-19 has put a halt to school field trips to the museum. However, home schooled students and their parents have helped fill that void.]

“Home schoolers played a big role in the success of Pioneer Days this fall,” he said, adding that programming plays an important role at the Pioneer Museum of Alabama through the year.

Barbara Tatom, museum director, said, too, that the CARES Act funds were greatly needed and most appreciated.

“We want to thank Gov. Ivey and Senator Holley for their support of the Pioneer Museum of Alabama,” Tatom said. “Fifteen thousand dollars is a lot of money. It was greatly needed and greatly appreciated. It will be put to good use.”

Tatom also expressed thanks to former State Representative Steve Flowers his longtime support of the pioneer museum and for working with Holley to acquire CARES Act funding for the museum.

“One of our volunteers, Rebecca Laney, saw on-line about the Cares Act; so, we filled out the application and Steve, who is on our board, got it touch with Sen. Holley and, we are very fortunate and grateful for the opportunity and for the funding.”

The Pike Pioneer Museum was founded in 1971, by the late Curren Farmer of Troy.

“His vision became a reality and the Pioneer Museum of Alabama is no longer a hidden treasure,” Flowers said. “It is the best pioneer museum anywhere around. All Pike County should take pride in it.”

The U.S. 29 overpass at U.S. 231 is open again, after an early morning fatal crash. Officials closed the overpass... read more