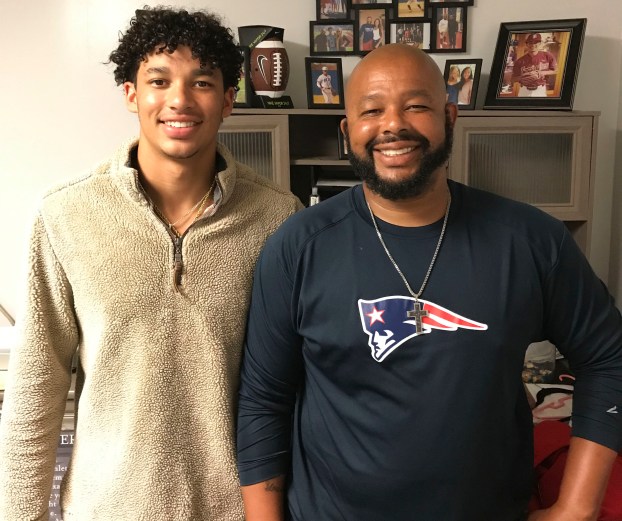 Whites enjoying their time together at Pike

First-year head coach Mario White and his son, Mayes, couldn’t have asked for a better season than the Pike Liberal Arts Patriots’ 2020 one.

The Patriots finished the season 10-2 and won the AISA State Championship for the first time since 2009.

“It feels great, unbelievable; it feels really good to achieve a goal that all the players sought out to do,” said Coach White. “For my son, for him to go out his senior year that way is unimaginable.”

“It felt great, and I had tears of joy in my eyes at the end of the game, because we worked so hard for this,” said Mayes, who was the Patriots’ starting quarterback.  “My dad and I have been through a lot together, and to finally come together and win a championship was a big deal for us.”

Though this season ended with a championship, there were unknowns and challenges along the way. Coach White found strength in his faith during the move to Troy.

“We knew God brought us down here for a reason, and we knew that if we wanted our message to be delivered, we knew we had to win,” he said. “My family and I talked about that the entire time – and the responsibility we had – and we knew we had to find success so people would listen to the message.”

The Whites arrived in the spring and Mayes was briefly able to play with the Patriot baseball team.

This fall, Mayes was introduced to a Patriot football team that featured new faces. Though Mayes was still new to the team, he soon found good chemistry with his teammates.

“We were a first-year team and had never played together,” he said. “But we came together pretty fast and were clicking at the right time.”

The team was confident, with a sense that this season was going to be memorable.

“Nothing is too big for God, and I feel like God brought me here with my family,” said Coach White. “I thought anything was possible and that we were here for a reason, and I felt like something big was going to happen.”

“Once we got all our players in, I feel like we had a good chance to be successful, and that our group was really special,” added Mayes.

The pair say they  have both grown a lot throughout this year, not only as a coach and a quarterback, but also as a father and son.

“I’ve coached him for a long time as far as baseball and football on staff, but as far as a head coach and quarterback, it’s been a lot different this year,” said Coach White. “Like anything else, we grow into it, and we find out things about each other each week. I think we got better and better as the season went along.”

“We have two different types of relationships: a father-son relationship and a coach-quarterback relationship,” Mayes said. “We were both growing more and more every week.”

Although he had success on the football field, Mayes found his true passion in baseball from an early age.

“I’ve been playing baseball since I was four years old, and started playing football around the time of my seventh grade year,” said Mayes. “I always knew I was going to play baseball in college, and football was just a hobby.”

“I still love football, but baseball is want I want to do, partially because of my size and how long I’ve been playing baseball,” said Mayes. “I wasn’t even going to play football this year until I found out that my dad was coaching; I was going to just focus on baseball.”

Mayes, a Florida State University commit, has already signed to play baseball at FSU next year. He knew that he would be attending FSU after an earlier visit.

“When I was 14 or 15, we were both on a trip and stopped by the Florida State campus,” said Mayes White. “We ran on the football field, and with the family atmosphere they brought, it just felt like home.”

Both Mayes and Coach White are confident that their relationship will remain strong during the next few years even though they will be apart.

“I don’t think that our relationship will change at all, because he’ll still call and text me every day,” said Coach White. “Of course I wish the best for him at Florida State, and I’m going to just be his dad and his fan.”

“I’ll still keep up with my whole family and the [PLAS] football team,” said Mayes White. “I’m sure that I’ll visit [Troy] when I can, and even try to watch some football games.”