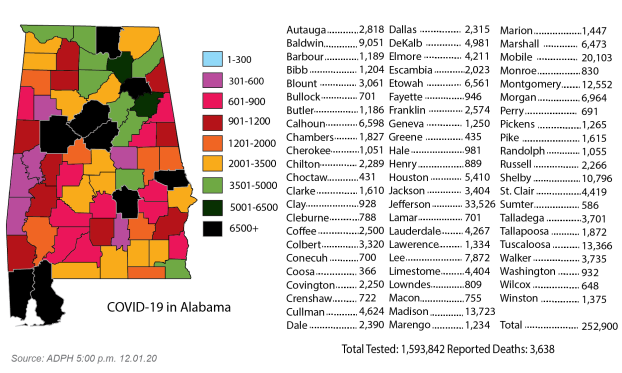 ‘Tidal wave’ of cases could be on horizon

Alabama hospitals that already are treating a record number of COVID-19 patients are bracing for a “tidal wave” of additional cases linked to holiday gatherings, a health official said Tuesday as schools and more grappled with the worsening coronavirus pandemic.

Despite the fact that less testing is going on now than earlier in the outbreak, the state has still recorded at least 2,000 new cases daily since Nov. 15. Hospitals are treating more patients than ever, and an expected post-Thanksgiving surge of cases has yet to begin, said Dr. Jeanne Marrazzo, director of infectious diseases at the University of Alabama at Birmingham.

Only 11% of the state’s intensive care beds were available Monday, according to the Alabama Hospital Association, and the remaining spaces could be filled as more patients are admitted than leave hospitals.

“We could really be in a situation in two to three weeks that compromises our ability to provide health care,” Marrazzo said. While experts have tried to avoid “alarmist terminology” during the crisis, she said: “I think this is a time when we need to start thinking about things like tidal wave imagery or tsunami imagery.”

Officials at Troy Regional Medical are seeing similar increases in COVID patients. “We have seen a steady increase over the last two to three weeks in both testing and COVID positive inpatient admissions,” said Amy Minor, Chief Clinical Officer, said. “Over 100 tests were collected on Monday with 18% being positive.”

According to the Alabama Department of Public Health, Pike County added 15 new cases overnight Monday, bringing the total to 1,615 with 14 confirmed deaths. The county’s 14-day positive rate climbed to 31.09%. More than 3,375 new cases were added across the state on Tuesday.

At UAB Hospital, where 60 to 70 COVID-19 patients have been treated at a time ever since summer, the number of patients has jumped to 125 recently, she said, and an expected flood of cases linked to holiday travel could overwhelm the system as even nurses and doctors fall ill.

“This is a really, really scary inflection point, and I don’t think that we’re going to be able to turn it around without experiencing some more stress and some more pain,” she said. While vaccines could arrive as early as this month, officials say it will be spring at the earliest before most people can receive the treatment.

Minor said TRMC officials, like others across the state, are concerned about the increasing demand on hospitals. “It is a definite concern. We (clinical staff) meet daily to discuss, evaluate and address any critical needs throughout the entire medical center,” Minor added.

Nearly 253,000 people in the state have contracted COVID-19 and more than 3,600 have died. While the illness causes only mild or moderate symptoms in most people, it can be deadly for the elderly and people with other, serious health problems.

With illness worsening as the virus rapidly spreads through communities, Birmingham city schools said they would return to virtual classes starting next week, and school officials in nearby Bessemer announced plans to return to a mix of in-person and online teaching.

Court officials in rural Cullman County announced they would end jury trials because of worsening conditions, and the Lee County sheriff’s office said delays in administrative tasks like processing paperwork would result from office workers falling ill or having to quarantine.

The Mercedes Marathon, which typically draws thousands of people to downtown Birmingham in mid-February, was canceled as a precaution because of worsening illness.

“We could not in good conscience support holding the event in February and potentially create an environment where COVID-19 could thrive. We will make every effort to help make sure the 20th Anniversary race takes place – whether it happens in 2021 or 2022,” said a statement from Michael Goebel, chief executive of the Mercedes-Benz plant west of Birmingham.

A statewide order requiring face masks in public expires Dec. 11, but it could be extended for additional weeks as in the past.

State hospitalizations ‘out of control’

MONTGOMERY, Ala. (AP) — Alabama on Monday reached a new high for the number of people in state hospitals with... read more