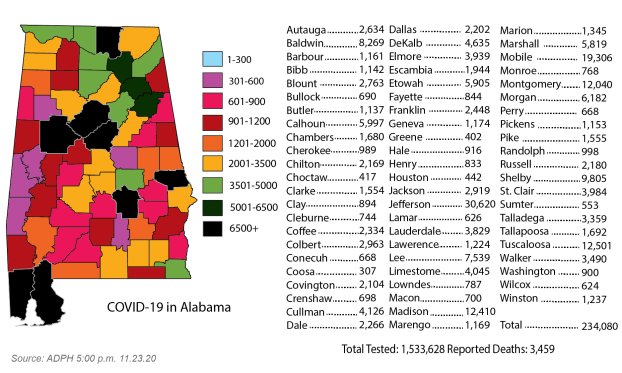 MONTGOMERY, Ala. (AP) — Doctors and health officials on Monday pleaded with people to take precautions during Thanksgiving — such as skipping large indoor gatherings — as the state and nation experiences an unchecked spread in COVID-19.

“Please do everything you can possibly do to keep yourself and your loved ones safe. We don’t want this to be the last ever Thanksgiving for someone in your family like your parents or grandparents,” Harris said.

Harris said Thanksgiving, and how it is handled, will determine what December and Christmas look like. “We are not going to get a do-over on this.”

The state is seeing the highest number of daily new cases since the pandemic began and an increase in hospitalizations, he said. As of Monday, about 1,400 people were in state hospitals with COVID-19, slightly below the summer peak of about 1,700. More than 1,570 new cases were reported Monday morning statewide, with eight new cases in Pike County. Total cases for the county was 1,555. Troy University reported xxxxx cases on Monday.

“Alabama is seeing its numbers go up, just like every other state in the country right now. We are not headed in the right direction. We are adding a couple thousand new cases a day at least,” Harris said.

The Centers for Disease Control and Prevention issued holiday guidelines and noted that celebrating virtually or with members of your own household poses the lowest risk. Recommendations include limiting the number of attendees as much as possible so people from different households can remain at least six feet apart, moving events outdoors and avoid gatherings in crowded, poorly ventilated spaces with persons who are not in your household.

Harris and Chief Medical Officer Dr. Mary McIntyre discussed how they are handling the holiday. Harris said he and his wife will be at home on their own.

McIntyre said she is limiting her gathering to a total of seven people and will visit with other family members via Zoom, including their tradition of saying what they are thankful for this year. They will use masks and temperature checks. McIntyre said she will serve all the food instead of having the normal buffet.

Since the pandemic began more than 230,000 people in Alabama have tested positive for COVID-19 and more than 3,400 people have died.

The Pike Liberal Arts Patriots won their first AISA State Championship since 2009 on Friday when they knocked off Glenwood... read more