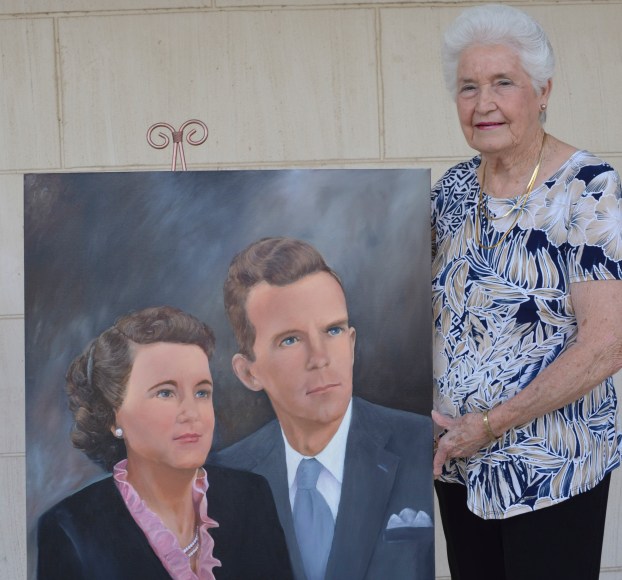 Artist and docent Ruth Ellen Walker was commissioned to create this portrait of Holman and Ethel Johnson, benefactors of the Johnson Center for the Arts in Troy.

When Alabama began to see a glimmer of light in the shadows cast by COVID-19, Ruth Walker, a docent at the Johnson Center for the Arts, was ready to “get back to work.”

However, Brenda Campbell, JCA director, had another idea for the artist.

For quite a while, the two had been discussing the possibility of Walker painting a portrait of Holman and Ethel Johnson, the Troy couple for whom the Johnson Center for the Arts is named. Holman Johnson was a longtime Troy photographer and both he and his wife were art enthusiasts.

Walker welcomed the challenge, the first of which was to locate images of the couple.

“I contacted the couple’s daughter, Martha Jo Harvell, and she was able to send me photos of her mom and dad at about the same age,” Walker said. “The photos were black and white and the facial features were very good. But the photos were also very dark and there was no way to tell about the other details, such as hairline, hairstyle and coloring. So, doing the portraits were more challenging then I had thought but I don’t mind a challenge.”

The next step was to get the composition suitable.

“The portrait was to be 30×40-inches and would combine two photographs into one composition,” Walker said. “Putting two people together when they are not together and in such a way that it looks natural was another challenge. By using Photoshop I was able to put the photographs together in a pleasing composition. I then used the computer sketches as models to paint the portraits on canvas.”

The facial details were detailed in the photograph giving Walker clear likenesses for the portrait.

When the portrait was finished, Walker was pleased but also nervous in her desire to please the family.

“When I learned the family was pleased with the portrait, I was relieved and so happy,” Walker said. “I was honored to have had the opportunity to paint a portrait of a couple that was so involved in the arts and whose legacy continues through the Johnson Center for the Arts.”

In recognition of the contributions the Holman and Ethel Johnson made to the arts in Troy and Pike County and, in appreciation of the donation their son, Manley, and his wife, Mary Lois, made to the JCA, at its inception, the center’s board elected to name the arts center in memory of the elder Johnsons.

Campbell said Walker’s portrait of the Holman and Ethel Johnson will also be a lasting legacy of the couple’s appreciation for the arts and their contributions to the arts.

Restrictions tighten across the U.S.

From California to Pennsylvania, governors and mayors across the U.S. are ratcheting up COVID-19 restrictions amid the record-shattering resurgence of... read more