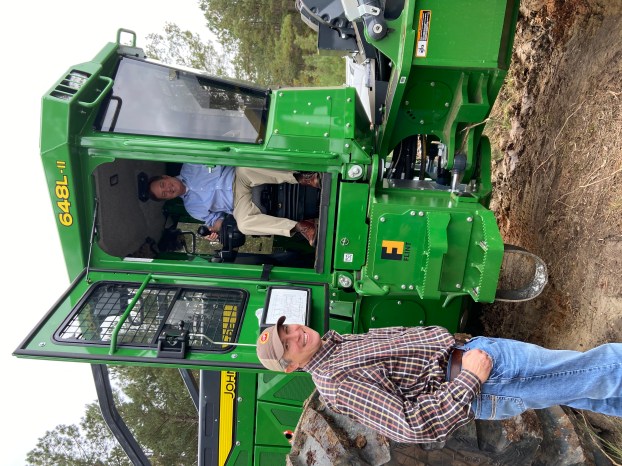 Russell Johnson and Marcus Paramore participated in the Farm-City Swap this week as part of the activities sponsored by the Pike County Chamber of Commerce Farm-City Committee. The committee held its annual banquet to honor award winners virtually this year. See inside today’s edition for a section honoring and recognizing the award-winners.

The annual Farm City Job Swap is one of the most popular events for the award-winning Pike County Chamber of Commerce Farm City Committee.

Each year, the Farm-City Committee invites a member of farming community and a member of the urban community to swap jobs for a day.

The purpose of the Farm City Job Swap is to bring greater awareness to and appreciation  for each other’s job, said Dana Sanders, Pike County Chamber of Commerce president.

Each came away knowing for certain that they did not have the skills or the  motivation to push the other out of his job.

The day began in Paramore’s office where he explained his role at the university.

His duties include staying current on existing and proposed legislation, meeting with local, state and federal government officials and lobbyists, and updating university management on relevant laws and regulations.

Paramore is a member of the Troy City Council and Johnson is a member of the Pike County Commission. Their memberships on governmental bodies, one urban and the other rural, provided the job swappers with an opportunity to discuss issues of local and common interests.

Later, Paramore donned his work boots and joined Johnson in a Paul Bunyan kind of world.

Johnson explained the purpose and importance of planned cutting programs and managing timber sales. He discussed the machinery that is necessary to move the timber from the farm to the lumber mill. Safety is job-one in the forest just as it is in all other workplaces,

On behalf of the Pike County Farm City committee, Sanders thanked Paramore and Johnson for agreeing to swap jobs for a day and for their outstanding leadership in their chosen professions.

The Farm City Committee would like to thank Marcus Paramore and Russell Johnson for graciously agreeing to give of their time to participate in this year’s Job Swap, Sanders said.

Sanders also took the opportunity to encourage all Pike Countians to learn more about the relationship between the rural and urban committees by tuning in to the 2020 Pike County Virtual Farm City Awards event on Troy Cable’s YouTube.

Because of COVID-19 restrictions, the Pike County Farm City Awards Banquet had to be canceled. However, the Farm-City Awards were presented virtually.

Sanders said the there’s a flip side to everything. Even though the Farm City Committee was unable to host the annual awards banquet, the committee members had opportunities to visit the award winners on their farms or business site and meet their families. So, the virtual awards program was a positive.

Sanders expressed appreciation to the Farm City Committee, Abby Peters, county extension coordinator, and the many others who made this year Farm City Week a success.

The stories of a generation are being lost. That’s what prompted Steve Stephens to organize a three-day, rolling tribute to... read more