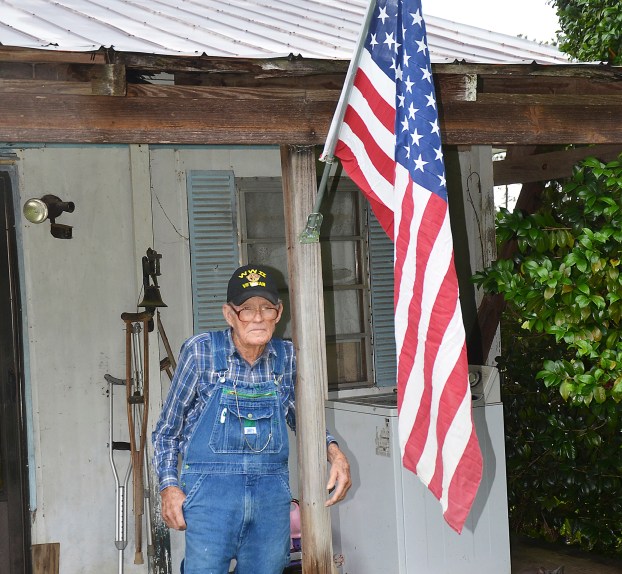 The late Max Thrash was a proud member of the Greatest Generation and hung the flag outside his Tennille home every day.

The stories of a generation are being lost. That’s what prompted Steve Stephens to organize a three-day, rolling tribute to Pike County’s World War II veterans this week.

You can read more about that tribute, and the men being honored, in the special Veterans Day section of today’s edition.

But one veteran’s story not included is that of Max Thrash, who died earlier this year at age 97.

Thrash was a mainstay at the Veterans Day and Memorial Day services at Elam Cemetery and he posted the American flag each day at his home just off Tennille Road.

Thrash was one of the thousands of American patriots who didn’t wait for Uncle Sam to call them into service. Thrash was seated in a theater in Bibb City near Columbus, Georgia on December 7, 1941. At the picture show, they announced that Pearl Harbor had been bombed and instructed all soldiers to return to base.

Thrash was working at Swift Cotton Mill but on Monday, he went in and turned in his time. He went back home to Pike County to work on the farm until Uncle Sam needed him. He got the rest of the peanuts in around lunchtime on Saturday and was on his way to the Army on Monday morning. He didn’t get to come back home for three years.

Thrash was a machine gunner with the Army’s 1st Infantry Division Big Red One. He was among the Allied fighting forces during the invasion of Sicily and fought all across Sicily. On Castel Hill No. 1 his unit was penned down for four days. He fought his way through many battles, pulling the trigger of his machine gun not knowing what marks the shells hit. Those battles were only

He fought his way through many battles and looked death in the face. He didn’t know how the enemy got to him and put a barrel in his face. He carried a pistol and shot before the enemy but he saw the face of the enemy. And it was that face that he saw in what he called nightmares.

Thrash’s story was his own, but there are thousands of other veterans whose experiences are worthy of hearing and remembering.

So, join us in tribute to those heroes.