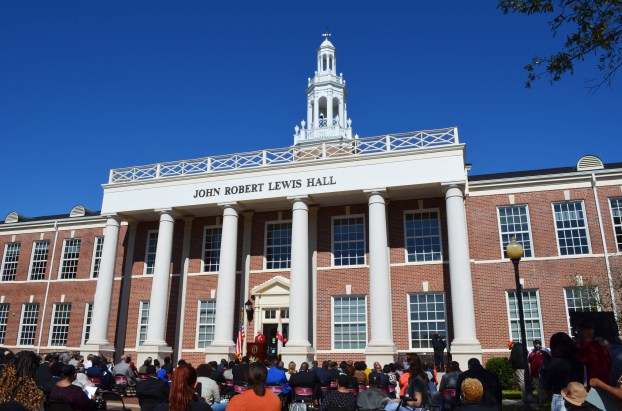 Friday, November 13, 2020, was a monumental day as Troy University dedicated the most iconic building on its campus to Civil Rights leader, the late John Robert Lewis.

Dr. Martin Luther King, Jr. referred to the Pike County native as the “Boy from Troy” who became not only a leader in the Civil Rights movement but continued to work for equality for all Americans as a member of the United States House of Representatives for Georgia’s 5th Congressional District.

Troy University Chancellor Dr. Jack Hawkins, Jr. said the naming of the storied building was the right thing to do, for today and for eternity.

“John Robert Lewis Hall” pays tribute to a leader in the Civil Rights Movement and to a national leader who continued to fight for equal justice for all people throughout his life, Hawkins said.

Lewis was the youngest speaker in the famed 1963 March on Washington and was a key figure in the Selma-Montgomery March that sped the passage of the Voting Rights Act. In 1986, Lewis was elected to the U.S. House of Representatives representing Georgia’s 5th Congressional District and served until his death in 2020.

Lewis held the honorary Doctorate of Laws from Troy University and Chancellor Hawkins said Lewis never let him forget that, in 1957, he was denied admission to Troy State Teachers College but was so smart he held 32 honorary doctoral degrees.

Hawkins said he is proud that today, one-third of Troy University’s student population is African American and that the university has 28,000 African American alumni. He also expressed pride in that Troy University’s Rosa Parks Museum in Montgomery was constructed on the site where Parks was arrested in the Montgomery bus boycott. Lewis, Hawkins said, led a group of U.S. Congressional members on a tour of the Rosa Parks Museum.

Titus Sizemore, Alpha Alpha Lambda Chapter of Phi Beta Sigma, referred to Lewis as a pearl irritated by the sand.

Sizemore said Lewis was irritated by the injustices of society but had the grit to become a man of “Good Trouble” and play a key role in the civil right movement and its actions to end legalized racial segregation in the United States.

Gibson Vance and Lamar Higgins, members of the Troy University Board of Trustees, also heralded Lewis for his commitment and dedication to bringing equality to all people.

Lewis, Vance said, possessed the fruit of the spirit – love, joy, peace and longsuffering – and that spirit reflected back on Troy.

Higgins remembered Lewis as one who would not support a cause unless he was willing to risk his all for the betterment of his fellowman.

Alabama Congressional representatives Martha Roby and Terri Sewell praised Lewis for his courage and his leadership.

“John Lewis was not afraid to be a leader,” Roby said. “He had courage, raw courage.”

And his courage and leadership helped bring about progress in racial equality but Sewell said the past cannot be erased.

“But we must continue to move forward to ensure that we are on the right side of history and that the best days are ahead,” she said. “The arc of the universe is long but it bends toward justice.”

The Lewis family expressed appreciation to Troy University for the high honor that it bestowed on John Lewis on Friday and all the days following.

Troy’s football game scheduled for this Saturday, Nov. 14, against No. 15 Coastal Carolina at Veterans Memorial Stadium has been... read more