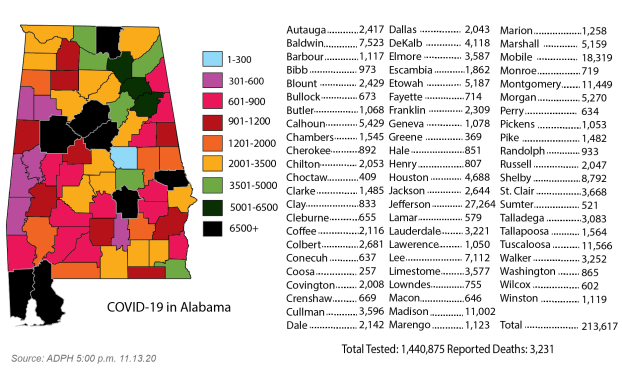 Troy University reported 13 additional cases on Friday, as COVID-19 issues forced the cancellation of a football game and reached near record-highs across the state.

The cases bring the week’s total for the university to 50, and the university’s total since early August to more than 650 students and employees on the Troy campus.

Across the state, 2,980 new cases were reported on Friday, reaching near record highs and pushing the state’s total cases to 213,617. Among those were 21 new cases in Pike County, raising the county’s 14-day infection rate to 21.9 percent. Total number of cases reported in Pike County 1,482 with 14 confirmed deaths.

The spike in Alabama cases come as the governors of Oregon and New Mexico ordered near-lockdowns Friday in the most aggressive response yet to the latest wave of coronavirus infections shattering records across the U.S., even as many of their counterparts in other states show little appetite for reimposing the hard-line restrictions of last spring.

“We are in a life-or-death situation, and if we don’t act right now, we cannot preserve the lives, we can’t keep saving lives, and we will absolutely crush our current health care system and infrastructure,” Democratic Gov. Michelle Lujan Grisham of New Mexico said in imposing a two-week stay-at-home order. Oregon Gov. Kate Brown ordered a two-week “freeze” starting Wednesday under which all businesses will be required to close their offices to the public and mandate work-from-home “to the greatest extent possible.”

Both states had lockdowns earlier in the year, but the coronavirus is coming back with a vengeance across the country, and the U.S. is facing a long, dark winter. The scourge is blamed for 10.6 million confirmed infections and almost a quarter-million deaths in the U.S., with the closely watched University of Washington model projecting nearly 439,000 dead by March 1.

Deaths have climbed to about 1,000 a day on average. New cases per day are soaring, reaching another all-time high on Thursday of more than 153,000. Hospitals are getting swamped. Still, there is little will among many governors and other elected officials for going back to the kind of lockdowns and large-scale business closings seen last spring.

Among the reasons given: public fatigue, fear of doing more damage to already-crippled businesses, lack of support from Washington, and the way efforts to tame the virus have become fiercely politicized.

“I think that governors and mayors are, again, in a really tough spot. The American population is emotionally and economically exhausted,” Dr. Megan Ranney, an emergency physician and professor at Brown University in Providence, Rhode Island.

Governors in many states, such as New York, Maryland, Virginia and Minnesota, have instead taken largely incremental measures over the past few days, such as restricting the size of gatherings, making businesses close early, restricting capacity or cutting off alcohol sales earlier in the evening.

Friday, November 13, 2020, was a monumental day as Troy University dedicated the most iconic building on its campus to... read more