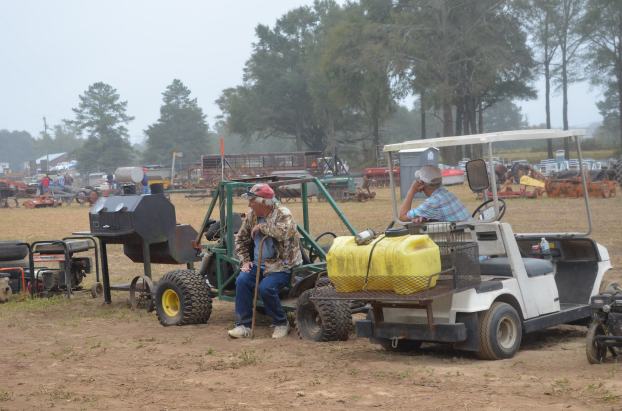 photo/Jaine treadwell | The Messenger From grills to golf carts, the 2020 Pike County Cattlemen’s Equipment Auction had a little bit of everything for potential buyers. The event raised more than $15,000, according to organizers.

The Pike County Cattlemen’s 2020 Equipment Auction on Saturday came up a little short of what might have been but, nonetheless, was a successful venture.

Johnny Garrett, Cattlemen treasurer, said estimates are that the Cattlemen will realize between $15,000 and $17,000 when all expenses are paid and the final tally is confirmed.

“Normally, we make a few thousand more dollars with our annual April auction but we are very pleased with what we made and appreciate those who brought items to be auctioned and those who came to bid,” Garrett said.

The Pike County Cattlemen’s 2020 Equipment Auction was planned for the first Saturday in April but due to COVID-19, Garrett said the Cattlemen initially decided to cancel the annual auction.

On Saturday, 39 police vehicles sold and that was good for seller, buyers and the Pike County Cattlemen.

Around 900 items were on the auction block throughout the day including everything from tractors and campers to tools and canoes to baby beds and syrup kettles and a little of everything else.

Garrett said some bidders take the opportunity that one man’s trash is another man’s treasure.

“They come in hopes of buying something and reselling it at a little profit,” Garrett said. “But most people who attend the Pike County Cattlemen’s Auction come to get good deals for themselves. And, too, a lot of people just enjoy an auction. They don’t come looking for anything particular, they just come to see what’s up for sale.”

Still on the block of the 2020 the Pike County Cattlemen’s Equipment Auction is a 28×56-foot mobile home.

“Sealed bids are being taken for the mobile home and it will be a good deal for somebody that’s looking for good deal in a mobile home,” Garrett said. “It has a refrigerator and a stove but no other furnishings. We’ll be accepting bids until December 1. The buyer will have 90 days to move the trailer from its location at Cattleman Park.

The Pike County Cattlemen’s Equipment Auction will be back on schedule in 2021.  Everyone is encouraged to begin now putting aside any and all auction items for the bigger than ever auction on the first Saturday in April.

For the first time in a long time, the Christmas season in Pike County will not be ushered in by... read more