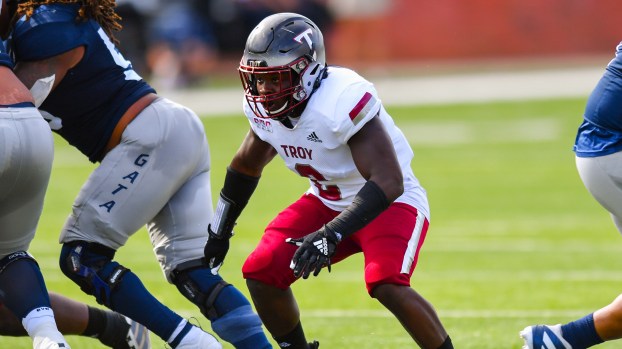 STATESBORO, Ga. – Troy scored a defensive touchdown in a third consecutive game but the Trojan offense could never get on track Saturday as Georgia Southern handed Troy a 20-13 loss in Sun Belt play at Paulson Stadium.

Troy (4-3, 2-2 Sun Belt) carried a 10-6 advantage into the half thanks to Dell Pettus’ 44-yard interception return for a touchdown that was aided by a big hit from Jayden McDonald on Georgia Southern quarterback Shai Werts. The defensive score was Troy’s fourth in the last three weeks and marked the first time in the school’s FBS history that it scored a defensive touchdown in three straight games.

Unfortunately for the Trojans, that would be their only trip to the end zone all afternoon. The Georgia Southern (5-2, 3-2) defense limited Troy to just 235 yards of total offense and 61 plays; the Eagles’ held the ball for nearly 43 minutes offensively behind their triple-option attack.

The Eagles also found limited success offensively Saturday with the exception of back-to-back drives in the third quarter; both of which were aided by a big play. Gerald Green took the Eagles’ second play of their second drive of the third quarter 69 yards for a touchdown and then on the ensuing possession for Georgia Southern a 35-yard pass set the Eagles up at the 5-yard line.

Paced by Carlton Martial and T.J. Harris, the Trojan defense recorded seven tackles for loss in the game and forced Georgia Southern into three punts and a missed field goal on its final four possessions.

Troy had a late chance to tie the game after the Eagles missed a 34-yard field goal with 2:40 to play in the game. Jacob Free led the Trojans down to the 16-yard line before ultimately throwing his second interception of the game.

Free finished 21-of-47 through the air for 201 yards, while Kaylon Geiger paced the Trojans with six catches for 49 yards. For Georgia Southern, Werts completed 12-of-13 passes for 85 yards, while Green finished with 109 yards on 10 carries.

Patriots score early and often in win over Monroe Academy

The Pike Liberal Arts Patriots scored 35 first half points on their way to a 45-7 win over Monroe Academy... read more