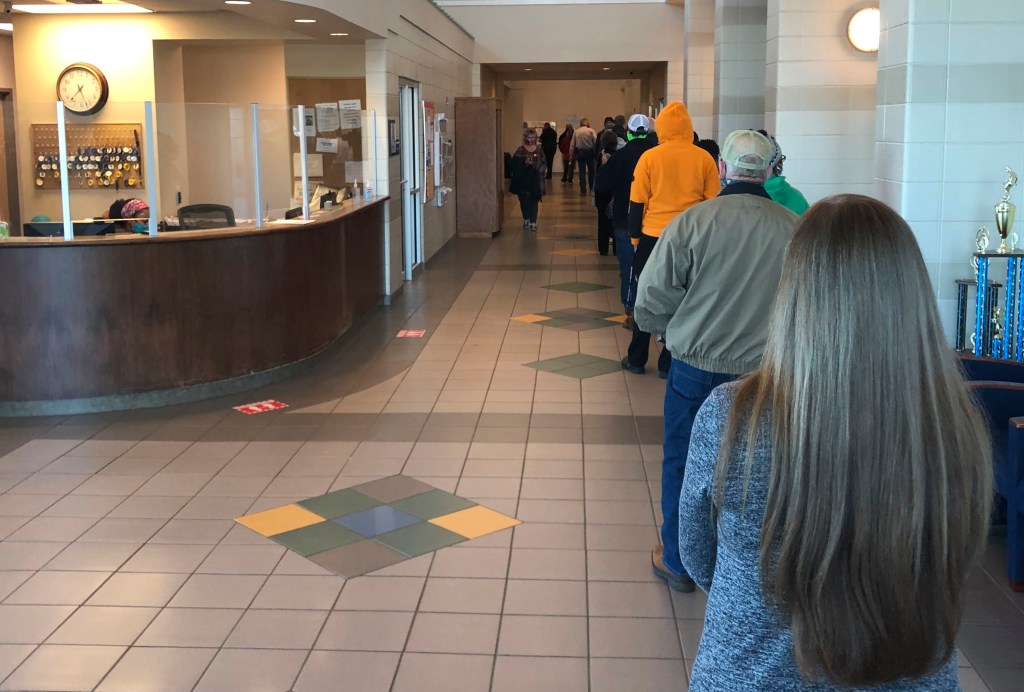 More than 58 percent of Pike County voters came to the polls on Tuesday.

With all but provisional ballots counted, 13,850 of the county’s 23,608 registered voters cast ballots in the general election, including 1,483 absentee ballots. Download a detailed breakdown here. Precinct Breakdown

“I think it was excellent,” said Jerry Williams, chairman of the Pike County Democratic Executive Committee. “During presidential elections you generally get a good turnout out.”

The turnout was among the highest in recent history, edging turnout in the 2016 presidential election. “And it was across all ages and all demographics,” said Angi Horn Stalnaker, who runs Virtus Communications.

Williams echoed observations about the involvement of younger voters.

“I thought it was a neat idea to get some of these younger people in as poll workers, learn the process, get interested in it,” he said. “There were some positives in this.”

Jones had widely been considered the Senate’s most endangered Democrat. Republicans had made recapturing the once reliably conservative seat a priority in 2020.

Tuberville has never held public office and last coached four years ago. He aligned himself closely with President Donald Trump and declared in the primary campaign that “God sent us Donald Trump.”

Republicans hammered Jones over his vote to convict Trump in the Senate impeachment trial earlier this year.

THIS IS A BREAKING NEWS UPDATE. AP’S EARLIER STORY FOLLOWS BELOW.

The GOP has won Alabama in every presidential election since 1976, when Jimmy Carter from neighboring Georgia was on the ballot. The outcome was hardly in doubt this year given Republicans hold every statewide office but one, as well as large majorities in both houses of the Legislature.

While issues like impeachment and the coronavirus pandemic threatened Trump nationally, none of that mattered in Alabama, which Trump carried handily in 2016 against Hillary Clinton. Some Republican candidates campaigned on little more than supporting Trump for a second term.

The state Democratic Party was better organized this election than in 2016, and the former vice president visited Selma before the coronavirus pandemic shut down much of his campaign for months, but Biden couldn’t close a gap that has taken on historical proportions in Alabama.

Republicans trying to maintain control of the U.S. Senate are staking their hopes on former college football coach Tommy Tuberville defeating first-term Democratic Sen. Doug Jones, who won the seat in a special election in 2017.

Tuberville, who has never held public office and last coached four years ago, is among the candidates who’ve aligned themselves mostly closely with Trump, even declaring in the primary campaign: “God sent us Donald Trump.”

Viewed as an underdog in a Republican-controlled state, Jones mocked Tuberville as “Coach Clueless” and chided him for his refusal to debate.

The state will have at least two new members of Congress after voters pick winners in races for two open U.S. House seats in south Alabama.The Republican chairman of the Mobile County Commission, Jerry Carl, is trying to keep GOP control in the southwest Alabama seat now held by Rep. Bradley Byrne. Carl is facing Democrat James Averhart, a retired Marine who runs a nonprofit group and directs the Mobile-area office of the NAACP.

In southeast Alabama’s 2nd District, Republican Barry Moore of Enterprise and Democrat Phyllis Harvey-Hall are vying for the job of GOP Rep. Martha Roby, who didn’t seek reelection. Moore is a former state representative and business owner, while Harvey-Hall is an educator from Montgomery.

Reps. Mo Brooks of Huntsville; Gary Palmer of Hoover; and Terri Sewell of Selma were unopposed in the general election.

Six statewide constitutional amendments are on the ballot, including one that would remove racist language from the state’s 1901 constitution, which was passed to ensure white supremacy in Alabama.

Sponsored by Rep. Merika Coleman of Birmingham, Amendment 4 would allow a recompilation of the state constitution to remove wording that prohibited mixed-race marriage and mandated racially segregated schools. While the prohibitions are no longer in effect, supporters of the amendment say they are an embarrassment and should be removed.

Recommended changes to the constitution would be submitted to lawmakers in 2022 for approval, and voters would again be asked to approve the stripped-down document. Voters defeated similar measures twice before, most recently in 2012.

Amendment 1 is a mostly symbolic measure pushed by Republicans that says only U.S. citizens have the right to vote, which already is the law nationally.

Amendment 2 would allow the full Alabama Supreme Court to appoint the director of the state’s court system, a task now performed solely by the chief justice, and make other changes to the judicial system. Amendment 3 would extend the amount of time that appointed district and circuit judges can serve.

Amendments 5 and 6 would protect anyone who kills someone in self-defense in a church in Franklin and Lauderdale counties. Alabama’s “stand your ground” law already applies inside churches, the attorney general’s office has said, but backers support more specific provisions.

Cavanaugh, seeking her third term, was the first woman to serve as chair of the Alabama Republican Party and has closely aligned herself with President Trump while espousing conservative orthodoxy. She says keeping power rates low helps families and business development.

Casey contends the three-member, all-Republican PSC is more interested in protecting the state’s largest electrical utility, Alabama Power Co., than consumers. She recently lost an appeal to the Alabama Supreme Court, which rejected her right to videotape a hearing held before the PSC about solar energy fees.

The ballot on Tuesday includes three contested seats on the Alabama State Board of Education.

Republican Stephanie Bell is touting her experience supporting educational programs, including the Alabama Reading Initiative, as she seeks an eighth term representing the 3rd District of central Alabama. She is opposed by Jarralynne Agee, provost and vice president of academic affairs at Miles College in Birmingham.

In the 5th District, which includes much of Alabama’s Black Belt region, Democrat Tonya Smith Chestnut and Republican Lesa Keith are vying for the position now held by appointee Tommie Stewart. Chestnut is a retired educator while Keith serves on the Montgomery school board and works as a real estate broker.