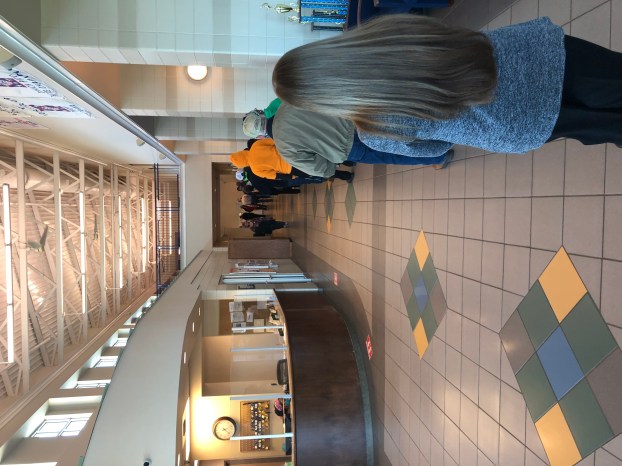 Lines stretched to the lobby of the Troy Recreation Center by 7:15 a.m. as voters waited to cast their ballots.

Early morning voting  in Brundidge was steady with only a short rush or two, said Myron Jones, inspector, at Brundidge Station.

“I’ve been very pleased with the voter turnout and with the way the new system is working as far as scanning in voter IDs,” Jones said. “I see the potential it has for future elections. It’s going to make voting run smoother for voters and poll workers.”

Around 9 a.m. Jones said 83 votes had been cast out of 714 registered voters for that  box.

“It’s early and I expect to have a big turnout,” he said. “I would be surprised if we don’t.”

Martha Battle and her mother Mariannn Battle were among the early morning voters.

“We’re here because that’s what Americans should do,” Martha Battle said. “Many Americans have died so we have the right to vote, to have voice in our government.”

Mariann Battle was in a wheelchair but she made that extra effort because voting is that important.

“Voting is our right and responsibility,” she said. “We are a Christian nation and we owe it to those who have fought and died to give us this right. And, we owe it to ourselves.”

At the Troy Recreation Center, lines snaked from the basketball courts to the lobby door by 7:10 a.m.

Pike County Probate Judge Michael Bunn said turnout was “heavy” by 10 a.m. today. “We have lines, but no big issues,” he said.

Bunn said earlier this month that extra poll workers had been hired to assist with the anticipated turnout. The county is also deploying a new electronic registration system, which is being used in tandem with the manual voter book system at most polling places today.

A photo ID is required to register.

The polls close tonight at 7 p.m.

Jones said there is plenty of time to get out and vote. Every vote counts.

The 2020 Presidential Election will be like none before. More than 100 million early votes have been cast and millions... read more