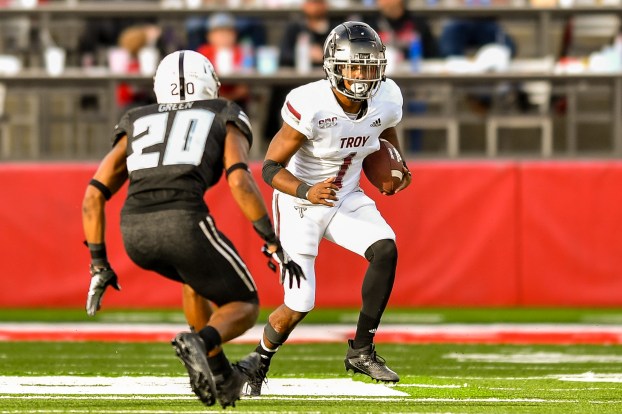 JONESBORO, Ark. – Jacob Free threw for the seventh most yards in school history and the Troy defense locked down a potent Arkansas State offense as the Trojans walked into Centennial Bank Stadium Saturday and left with a convincing 38-10 Sun Belt Conference victory.

“I am really proud of our guys for showing up on the road,” Troy head coach Chip Lindsey said. “Any time you can win on the road in this league, it is a big win. I am really proud of the way that our guys showed up for practice this past week. They put their head down and were ready to go to work and correct mistakes. We aren’t perfect yet, but I really like the direction that we are heading. It was a total team win. When you hold that team to 10 points, it is really impressive.”

Free, who was making his first career start, completed 33-of-45 passes for 419 yards and a pair of touchdown strikes. The junior signal caller showed no signs of rust in his first start since 2018 at Northwest Mississippi Community College as he led Troy (4-2, 2-1 Sun Belt) on a pair of first quarter scoring drives.

Luke Whittemore put the Trojans on the board with a 29-yard strike from Free on the opening possession of the game and the lead swelled to 14-0 following a 34-yard Free pass to Reggie Todd two drives later; it was Todd’s fifth touchdown of the season.

Troy’s defense deserves just as much praise after limiting one of the nation’s top offenses to just 10 points in its own house. The Trojans held the Red Wolves (3-4, 1-3) to just 379 yards of total offense and 271 passing yards; both around 100 yards fewer than their season average.

Troy went into the break with a 24-3 lead after Free used his legs for a touchdown right before the half and Evan Legassey punched through a 35-yard field goal. The Trojans held the Red Wolves to just three points and 177 yards in the first half highlighted by Will Choloh’s second blocked kick in as many weeks, this one a field goal attempt.

Richard Jibunor provided the knockout punch for the Trojans with a punishing blow midway through the fourth quarter on Arkansas State quarterback Logan Bonner. The hit jarred the ball loose and Darrell Starling scooped it up for Troy’s third defensive touchdown in the last two weeks.

Kaylon Geiger recorded his eighth career 100-yard receiving game as he finished with eight catches for 126 yards while freshman running back Kimani Vidal also pulled in eight catches that went for 77 yards. Vidal also rushed for 58 yards and a touchdown on 17 carries.

Bonner completed 17-of-29 passes for 105 yards while Layne Hatcher was 11-of-20 for 166 yards and a score in Arkansas State’s two-quarterback system. Lincoln Pare rushed for 90 yards on 12 carries.

The exact date Mickey Mouse came into this world is kind of iffy. Some say it as the day that... read more