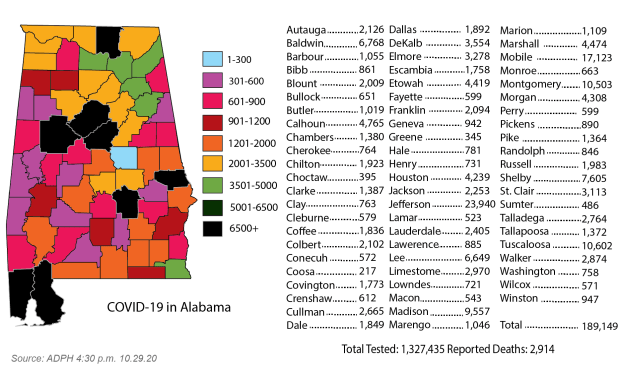 Pike County’s COVID-19 deaths climbed to 14 this week, as the county added more confirmed and probable cases of the virus.

The Alabama Department of Public Health has recorded 1,017 confirmed cases of COVID-19 and 347 probable cases in Pike County since tracking began. Statewide, the ADPH has reported 189,149 total cases, including 161,537 confirmed and 27,612 probable cases, with 2,914 deaths.

Nationally, a resurgence in the spread of the virus has raised concerns.

The resurgence of coronavirus cases engulfing the United States and Europe is imperiling economic recoveries on both sides of the Atlantic as millions of individuals and businesses face the prospect of having to hunker down once again.

Growing fear of an economic reversal coincided with a report Thursday that the U.S. economy grew at a record 33.1% annual rate in the July-September quarter. Even with that surge, the world’s largest economy has yet to fully rebound from its plunge in spring when the virus first erupted. And now the economy is slowing just as new confirmed viral cases accelerate and rescue aid from Washington has dried up.

If many consumers and companies choose — or are forced — to retrench again in response to the virus as they did in the spring, the pullback in spending and hiring could derail economic growth. Already, in the United and Europe, some governments are re-imposing restrictions to help stem the spread of the virus.

In Chicago, where Gov. J.B. Pritzker of Illinois has banned indoor dining and drinking, Grant DePorter, who runs Harry Caray’s Restaurant Group, worries that the blow to restaurants and their employees could be severe.

When indoor dining was first shut down in the spring, he noted, employees could get by thanks to a $600-a-week federal unemployment benefit. That benefit has expired.

“Everyone is incredibly disappointed by the state’s decision,” DePorter said.

In Rheinberg, Germany, Michael Boehm had set up plastic igloos outside his restaurant to welcome guests during the winter. But Germany’s new restrictions, Boehm said, will threaten businesses like his by forcing them to provide only take-away meals through November.

A major uncertainty is whether most people will abide by government directives or whether the resistance to lockdowns and other restrictions that have emerged in parts of the United States and Europe will slow progress in controlling the pandemic. President Donald Trump, facing an election in five days, has loudly denounced states and cities that have imposed restrictions on businesses to help control the pandemic. And many of his supporters have registered their agreement.

In Spain, some regions have closed bars and restaurants. But the government hasn’t provided subsidies to aid the proprietors, triggering protests in Barcelona this week by business owners who banged pots, waved cocktail shakers and chanted, “We want to work!”

The U.S. government’s estimate Thursday of third-quarter growth showed that the economy has regained only about two-thirds of the output that was lost early this year when the eruption of the virus closed businesses, threw tens of millions out of work and caused the deepest recession since the Great Depression.

The economy is now weakening again and facing renewed threats. Confirmed viral cases are surging. Hiring has sagged. Federal stimulus has run out. With no further federal aid in sight this year, Goldman Sachs has slashed its growth forecast for the current fourth quarter to a 3% annual rate from 6%.

Gregory Daco, chief U.S. economist at Oxford Economics, noted that the record-high third quarter growth in the nation’s gross domestic product “tells us little, if anything, about momentum heading into” the current quarter.

“The strong GDP performance gives a false impression of the economy’s true health,” Daco wrote in a research note. “We anticipate a much slower second phase of the recovery.”

Likewise in Germany, Europe’s largest economy, Oxford Economics has raised the possibility that its already pessimistic forecast of 1.2% growth for the fourth quarter will have to be downgraded. Oxford’s forecast is based on an index that reflects credit card payments, online restaurant reservations, health statistics and mobility data.

Another setback for the U.S. economy would again most likely imperil front-line service companies — from restaurants and bars to hotels, airlines and entertainment venues. Boeing, for example, said this week that it will cut 7,000 more jobs because the pandemic has smothered demand for new planes.

Perhaps no economic sector is under a darker cloud than the bar and restaurant industry, which is both vulnerable to the spread of the virus and deeply affected by government restrictions.

Dr. Emily Landon, a medical director at the University of Chicago’s medical school, said two factors facilitate the virus’s spread in winter, especially at restaurants: Colder air is drier, and the droplets that transmit the virus become even smaller.

Add to that, she said, what people do in a bar or restaurant.

“There are only a couple activities where you have to take your masks off around other people, and that is dining in a restaurant and going to a bar,” Landon noted. “There is just no way to escape the risks (of COVID-19) when you go into a restaurant.”

Mark Zandi, chief economist at Moody’s Analytics, warned that the job market might not fully recover until perhaps 2023 because “many of the jobs in retailing, leisure and airlines have been permanently lost, and those folks will have to find different work, and that will take time.”

In contrast to the hospitality sector, some industries are actually faring well, pointing up the unevenness of the pandemic economy. From Amazon and Walmart to delivery services like UPS, Grubhub and DoorDash, some companies have benefited from evolving consumer demands. So have companies involved in streaming or cloud computing services, like Netflix, Microsoft and Comcast.

But for the U.S. economy as a whole, the prospect that the virus could roar back is a growing fear. Add to that the failure of Congress to pass another rescue aid plan now that the package it enacted back in spring has expired. That $2 trillion package managed to ease the pain of the recession by boosting incomes and spending and supporting small businesses. Without additional aid, Federal Reserve Chair Jerome Powell has warned, those dynamics could re-emerge.

The $600-a-week federal unemployment benefit and $1,200 stimulus checks that went to most individuals under last spring’s federal aid package enabled many of the jobless to rebuild savings, allowing them to keep spending even after the $600 supplement expired in July. Both are now long gone.

Gus Faucher, chief economist at PNC Financial Services, envisions a slowdown to GDP growth to 4.8% annual rate in the current quarter and a 3.7% rate in the first three months of 2021. But he said he might have to reduce his forecasts if either pandemic worsens or Congress fails to provide more economic stimulus early next year.

If many states felt compelled to impose shutdowns in response to an acceleration of the virus,” Faucher said, the economy could even fall back into recession.

“I am concerned,” Faucher said, “that the longer it takes to get a stimulus bill, the more structural damage we will see to the economy with more businesses closing.”

Hurricane’s path plunges hundreds of thousands into dark across Alabama

Hurricane Zeta plunged a large swath of Alabama in the dark overnight with hundreds of thousands still without power early... read more