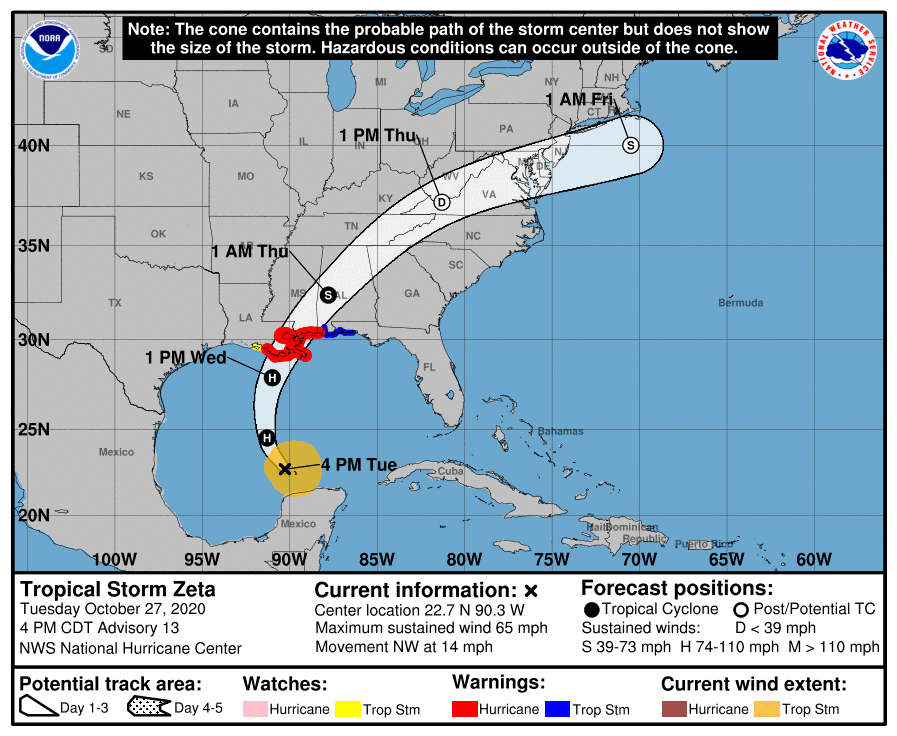 Zeta is set to make landfall between southeastern Louisiana and coastal Mississippi on Wednesday evening before making its way into central Alabama.

“We will be staffed and ready to respond if there are any issues.”

Zeta, the 27th named storm of a very busy Atlantic hurricane season, was a hurricane when it began raking across Mexico’s Yucatan Peninsula early Tuesday. It emerged in the Gulf of Mexico as a tropical storm but was expected to regain hurricane strength before landfall south of New Orleans Wednesday evening. Once on land, forecasters are predicting an easterly turn which will bring the storm towards Central Alabama.

Zeta will likely bring damaging winds, heavy rains, high surf and rip currents, storm surge, and isolated tornadoes.  The threat for local impacts continues to increase, especially with regard to wind impacts.  Scattered to numerous downed trees and powerlines are expected along with scattered to numerous power outages.

Troy City Schools will dismiss students at 1 p.m. Pike County Schools will also dismiss at 1 p.m., while all other worksites will close at 2:30 p.m. As of Tuesday afternoon, Pike Liberal Arts School will remain open on Wednesday.

There have been so many storms this season that the hurricane center had to turn to the Greek alphabet after running out of assigned names.

Residents of the storm-pummeled Gulf Coast steeled themselves for yet another tropical weather strike Tuesday as Tropical Storm Zeta took aim at southeast Louisiana, fraying the nerves of evacuees from earlier storms and raising concerns in New Orleans about the low-lying city’s antiquated drainage pump system.

Already this year, Louisiana has been hit by two tropical storms and two hurricanes: Laura, blamed for at least 27 Louisiana deaths after it struck in August, and Delta, which exacerbated Laura’s damage in the same area weeks later. New Orleans has been in the warning area for potential tropical cyclones seven times this year but has seen them veer to the east or west.

“I don’t think we’re going to be as lucky with this one,” city emergency director Colin Arnold said at a news conference with Mayor LaToya Cantrell. Louisiana Gov. John Bel Edwards said Tuesday he asked President Donald Trump to issue a disaster declaration ahead of the storm.

One worry among New Orleans officials: a turbine that powers the city’s street drainage pumps broke down Sunday, according to officials of the agency that runs the system. There was enough power to keep the pumps operating if needed but it left authorities with little excess power to tap should a breakdown of other turbines occur.

Officials said they were running through contingencies for rerouting power should the need occur. Forecasts, meanwhile, called for anywhere from 2 inches to 6 inches (5 to 15 centimeters) of rain to fall in the New Orleans area. Officials noted that Zeta is expected to be a relatively fast-moving storm, minimizing the flood threat.

Zeta had sustained winds of 65 mph ( kph) winds and was centered 450 miles (720 kilometers) south of the Mississippi River’s mouth Tuesday afternoon. Its approach toward New Orleans meant more worries for evacuees left homeless by Laura who are sheltered in hotels. The state is sheltering about 3,600 Laura and Delta evacuees, most of them in New Orleans area hotels.

“It really is scary, and I don’t know what to do,” said Yolanda Lockett, who evacuated her Lake Charles apartment — now a rain-soaked, moldy mess — ahead of Laura at the end of August. “I’m physically and mentally tired,” she said, standing outside a New Orleans hotel.

A hurricane warning stretched from the central Louisiana coast to the Alabama state line. Edwards and Alabama Gov. Kay Ivey both declared emergencies ahead of the storm.

“We’re getting pretty good at it for doing it five times this season so far,” said Robert Campo as he readied his marina at Shell Beach for the storm. The routine includes removing gas pumps used to fuel boats, loading frozen bait onto old school buses that have been converted into mobile freezer units and tying down trash cans to keep them from floating off.

On Dauphin Island, off the Alabama coast, workers at Dauphin Island Marina prepared for Zeta on Tuesday even though little remained of the business to protect after it was pummeled by Sally in September.

“Right now we’re packing stuff up just to be safe,” said marina employee Jess Dwaileebe. “We don’t have any docks or fuel pumps at this point. Sally took it all out.”

In Waveland, Mississippi, hardware store operator David Hubbard didn’t see the usual rush of people buying storm supplies. Most have what they need because Zeta is only the latest threat, he said.

The extraordinarily busy hurricane season has focused attention on the role of climate change, which scientists say is causing wetter, stronger and more destructive storms.