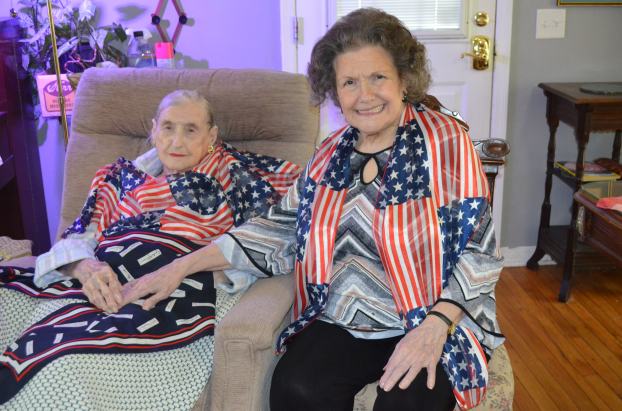 Although there are still a few days remaining before the October 29 deadline for absentee voting in the general election, Sarah C. Jones of Goshen was taking no chances.

On Thursday afternoon, Jones demonstrated her patriotism by donning her red, white and blue scarf and voting for the candidates she deemed the “best for the jobs.”

“I always wear this scarf when I vote,” Jones said. “Everybody should vote.”

At age 104, Sarah C. Jones will undoubtedly be among the oldest Americans to cast their votes in the U.S. presidential election on Nov. 3 and among the most dedicated of voters.

Jones has lived through 17 U.S. presidents and although she was not eligible to vote in all of the presidential elections, she never missed casting her vote anytime she had to opportunity.

Jones was born in Pike County in 1916 and attended school in Troy.

She was working in Montgomery when World War II broke out. Her husband, Wilbur Jones, was called into service and served with the Navy in the South Pacific.

She traveled to Seattle, Washington, by train to be near him. After the war, Sarah Jones work with GMC in the payroll division. Her husband was a minister and she would lead the singing at the services.

Jones believed in working and she believed in America. By working, by contributing, she was showing her patriotism.

Living and working in Birmingham, Jones never missed an opportunity to “go to the polls.

Voting is a privilege and a responsibility.

And so is the opportunity to work and contribute to the American way of life.

So, Sarah Jones continued to work until she was 86 years old.

She was working at a church on Shades Mountain and but realized the drive down the mountain at night was not what she should be doing at her age, her daughter, Sally Jones said.

“So, that’s the only reason she retired.”

Sally Jones said her mother is a “sweet, Christian lady” and, a friend added, she would “do to ride the river with.”

Sarah C. Jones has been leading the charge for all Americans to get out and vote for most of her 104 years. Her candidate might not have been the winner each time but she did her part. “I voted,” she said.

The deadline to apply for an absentee ballot for the Nov. 3 general election is on the close of business Thursday, October 29.

Any qualified elector may vote an absentee ballot by U.S. mail or in person at the absentee election manager’s office, if he or she makes application, in writing, and meets one of several requirements, including being out of the county or state on Election Day, having a physical illness or infirmity that would prevent attendance at the polls, working a shift that coincides with poll hours, an enrolled student at an educational institution out of county and others.

Charles Henderson announced this week that they will be canceling the remainder of their high school football season. The decision... read more