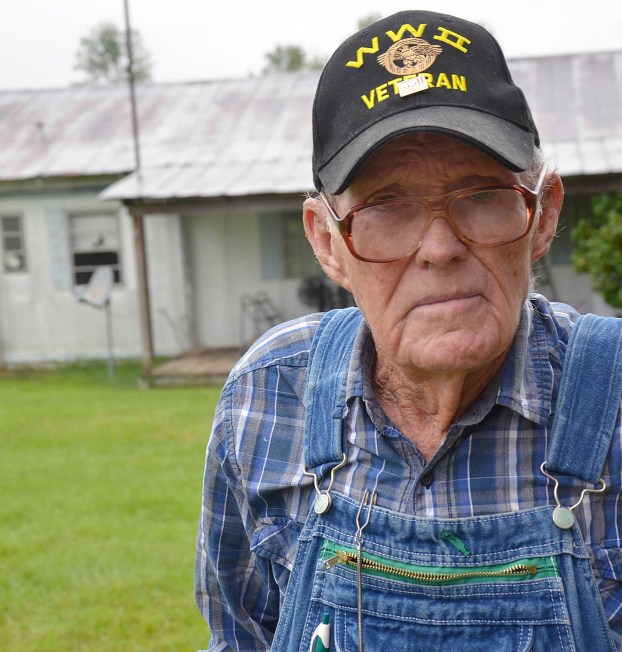 File Photo | The Messenger Max Thrash, who fought in WWII, passed away this week at the age of 99.

County mourns patriot’s passing: ‘One of the hardest working men I’ve ever known’

The death of Max Thrash, 99, on October 13, 2020, brought a final rest to a member of the Greatest Generation, one of Pike County’s oldest World War II veterans and a legacy to his family and all who knew him.

Thrash was a true American patriot who posted the American Flag at his home in the Tennille community every day as long as he was physically able.

He was proud of his service to his country and would “leave again tomorrow, if called,” he often said. “A man would be a fool not to fight for his country.”

Thrash was a machine gunner with the Army’s 1st Infantry Division Big Red One. He stormed the beaches of Normandy on D-Day where he was wounded twice and received a Purple Heart.  He was a lifelong member of the Brundidge VFW 7055.

Thrash grew up in the Richland community and moved to the Tennille area in 1985. He always wanted to go back to Richland, his daughter Maxine Thrash Rhodes said.

“Daddy came from a large family and he only had a fourth-grade education but nobody could beat him in math,” Rhodes aid. “He was one of the hardest working men I have ever known.”

“He was always working and I don’t ever remember him being sick,” Rhodes said. “He was always willing to do what he could for others. A lady told me once that he kept her family of 13 fed when her daddy was not able to do so.”

Rhodes’ dad taught her many things and one thing that she will never forget is that “can’t never could, until he tried.”

“Daddy continued to go and do and there was nothing that he wouldn’t try and couldn’t do.

Trash’s granddaughter, Kim Mueller, said her Papa was the smartest man she ever knew. And he was a great man who was loved by so many.

“Papa made all of us feel special, always, including all the little kids he taught to fish,” she said.  “He loved fishing, hunting, farming and family. Nothing was better to him, especially as he got older, than a shindig. His favorite was either a fish fry or hog cooking.

Mueller said her Papa taught her the difference between right and wrong and that anything worth having is worth working for.

“He taught me about the wonders of the outdoors and about the Master’s artwork,” she said.

“God knew what He was doing when He made Papa. He made him tough but tender, soft but strong, lenient but firm.

“Papa was a simple man who loved Jesus and his family. He never met a stranger and tried to help everyone. He was a true, genuine Southern gentleman.”

“And he lived every one of them the best that he could and to the fullest,” his family said. And, he never said “can’t,” not to anything or anybody.

Max Thrash left that kind of a legacy not only in his family but to all who knew him.