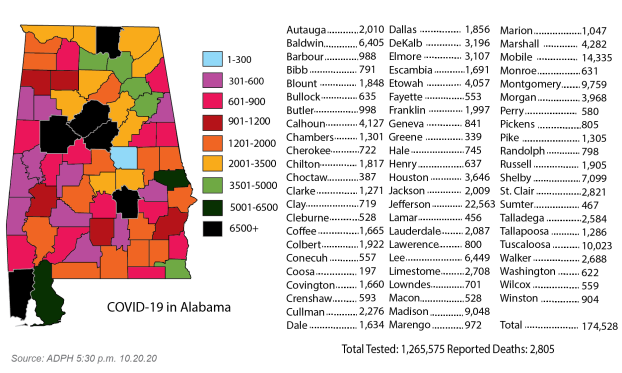 MONTGOMERY, Ala. (AP) — The coronavirus pandemic appears to be worsening again in Alabama after weeks of improvement as residents grow weary of preventive measures that slowed the spread of the disease after a summertime peak, health officials said.

Donald Williamson, the president of the Alabama Hospital Association, said he has noticed fewer people wearing masks and trying to stay away from each other in public over the last couple weeks, and such changes seem to be showing up in troublesome statistics.

“I think it’s clear that we all have COVID fatigue,” Williamson said in an interview Tuesday.

Dr. Ellen Eaton, a disease expert at the University of Alabama at Birmingham, tweeted that average daily hospitalizations, deaths, the transmission rate of the virus and positive tests all were rising “just as flu season arrives.”

More than 2,800 people have died from COVID-19 in the state, which ranks 20th highest in the nation for fatalities on a per-person basis, and about 174,000 have tested positive, according to researchers at Johns Hopkins University.

As of Tuesday, Pike County had 989 confirmed cases and 316 probable, with 12 deaths. Troy University had reported only 25 student cases in the past seven days.

The virus has been spreading at a quickened pace since early October, figures show, and around 840 people have been hospitalized a day over the past week, compared to around 750 a day in late September.

The state’s situation is much better than in the summer, when hospital intensive care beds were nearly full and the virus was spreading out of control, Williamson said. The state’s virus caseload fell and stabilized after Gov. Kay Ivey and health officials imposed a statewide mask order that will extend at least into November.

It could take about four weeks to determine whether Alabama is headed toward a new, elevated plateau or another uncontrolled spike that could fill up hospital beds once again, Williamson said, but neither are good as flu season gets closer and cases of COVID-19 are on the rise in a majority of states.

“Things are not going well,” he said.

While the virus causes only mild or moderate symptoms for most people, it can be deadly for the elderly and people with other health problems.

Church of the Highlands off to welcoming start

The Church of the Highlands is off to a welcoming beginning in Troy.  With 750 in attendance in the combined... read more